With most musical sub-genres and regional scenes, I have found that most people will have what I call a three- to four-pillar series of bands. These groups are generally the more popular bands. and sometimes even the cream of the crop. They do what they do the best and have come to define their particular musical realm.

In the case of the Polish death metal scene — which is a dangerous one to bandy about, since it seems like huge swaths of it have become the “blackened death metal scene” — the imperialistic, riff-heavy, relentless-blast-and-shouted brand of death metal that has hailed from Poland, and it seems like only from there for some time, would later become one of the progenitors, if not the most important one, for the sort of subtle genre-morph that Blackened Death Metal has gone through. It has reached the point where the two have almost become synonymous. 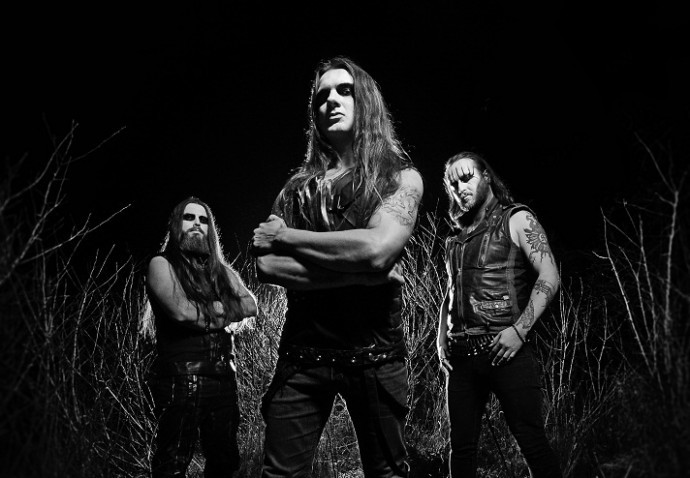 Bands like Vader, Behemoth, Hate, and others have all pulled the genre in a variety of directions and are basically all owed a debt by groups nowadays who feel like blasts and apocalyptic production permits attaching the word “blackened” to the front of their genre label. While different bands have gone in a variety of different directions, becoming an unholy mass of tech-death, groove, and thrash sometimes, and while you have groups like Behemoth who have gone for full atmosphere and a catchier route, no one has stuck to their guns harder than Vader and Hate have.

Vader have the excuse of being one of the most long-running bands in the genre, and Hate have been the ones to really stay with the Goliath-esque sound that simply destroys everything in their path. In a way, by doing what they’ve done for as long as they have, Hate have become one of the prototypical bands — with a string of great-to-amazing albums to their name — and are now in the position of being one of the dominating forces of the Blackened Death genre.

2013’s Solarflesh was a hell of a disc, taking what the group had already forged in Anaclasis, Morphosis, and Erebos, and making it more exotic and ritualistic. It is a history that explains who so many people had their eyes and ears locked on Crvsade: Zero, Hate’s newest testament to Satan, destruction, and all things blast-heavy.

In some ways, you could argue that what Hate have been up for the past four albums have been the creation of large iterations upon each disc. The core and foundation is largely the same, and it was on the fringes of each song where the work was taking place; and so after Solarflesh it could be assumed that perhaps the band saw a chance to do something different, because Crvsade: Zero differs from its predecessors in a number of aspects.

Obviously, it’s the group’s first release without their bassist Mortifier, who passed away in the middle of 2013 at the age of 27; he had been with the band since 2007. Another change  is that in direct comparison to Solarflesh, Crvsade: Zero is a different beast, one that is less exotic and ritualistic and far more mechanical and cold-feeling. The band avoid any feeling of sterility, but if you were to view Solarflesh as a gospel and a mass, Crvsade: Zero is a machine, one hammering out each note with a calculated proficiency that could jar a few listeners.

Crvsade: Zero is also a slower-moving album than its predecessors, with a good chunk of its songs being mid-tempo grinders, as they slowly lumber about and flatten everything surrounding them. This time, Crvsade: Zero has quite a few songs that feel built around shout choruses, three-to-four-word phrases chanted over and over until they bore into your head whether you want them to or not. It feels like part of Crvsade: Zero was written as a disc to be played live, because quite a few of these songs seem tailor-made for crowd interaction.

It’s still unapologetic in how huge it is, but it’s not the organic monster that Hate had built up before, where each disc could’ve summoned an ancient god. This time, Hate are aiming to summon a machine-god bathed in the night. The change of pace is, for sure, as jarring as it can be.

I think the fact that the band have added not one, but two, intros to the front of the disc alongside two segues is a pretty big mark against Crvsade: Zero. It feels a bit like the band are stretching, and the fact that there is a bonus track out there with potentially actual music on it is a bummer. I am perfectly fine with segues as mood-setting, and honestly, the two that are in the back half of the disc are not bad in any sense, but the opening two where “Lord Make Me An Instrument Of Thy Wrath” could’ve been folded into the following song “Death Liberator” sets a rough precedent.

Aside from the bitching and grousing, though, Hate still have a solid disc in Crvsade: Zero. Minor quibbles about intros and segues are things on the outskirts of what the band are doing, things you hope don’t dominate the overall work, but the music within is still a recognizably enormous monster that errs more on the comfort-food side than anything revelatory.

The songs are still monstrously evil challenges to the status quo on the lyrical front, and Crvsade: Zero sees Hate leading an assault in praise of darkness. One of the running themes on this disc is the apocalypse and destruction. I’ll be honest, after seeing Hate use a lot of flowery language and “ye olden speak” to write their song titles, a song called “Doomsday Celebrities” threw me for a loop. But as one of the slower songs on the disc, it is also one of the better ones.

It’s a slow suffocation by a heavy weight being laid on top of you. Each super-long riff is one more compression of your lungs until the mid-section takes on a pummeling hammer of a riff. The song also packs a pretty murderous guitar solo into the track as well.

The one-two combo of “Hate Is The Law” into “Valley Of Darkness” is also really good, as both songs are enormous beasts in their own right. “Hate Is The Law” is the faster of the two and also the more furious, with Adam yelling, “Rip this fucking world apart!”. “Valley Of Darkness” is the slower, oozing song in comparison, and also beast in its own right with a longer run-time.

About 70% of the songs on Crvsade: Zero run at about the tempo of “Valley Of Darkness”. Sometimes, you can use previous discs as a portent of what the songwriting will be like on the next album. In this case, it appears that Hate decided to expand upon the ideas they were exploring in “Sadness Will Last Forever” and “Endless Purity” from Solarflesh — using these slower, more monolithic song structures that have the band coming across as a huge monster staggering about after being freshly awakened.

The true dark horse of a song pairing, though, consists of the closing tracks “Rise Omega The Consequence!” and “Dawn Of War”, both of which may leave you yelling ‘Fuck yes!’ as you go through the tracks. It also helps that they’re the some of the faster material on Crvsade: Zero. While most of the album feels as if built for crowd interaction, these two tracks are the sort of imperialistically written, windmill headbanging songs that I enjoy from Hate. Both tracks thrash about with nary any sense of what is surrounding them.

“Rise Omega” is Armageddon in song form, both lyrically and musically. The blast sections of that song, with Adam yelling over the top of them, feels like a wall of fire descending upon the unlucky fools who are standing in its way. If that doesn’t kill you, “Dawn Of War” is sure to leave your shattered corpse in a pile of dust, especially after the closing lead-into-solo on the song. Hate use their solos and lead guitar parts sparingly this time around, and they stick out tremendously amidst the giant armies of riffs and straightforward and destructive drumming on this disc.

Hate have a monstrous volley of artillery being fired in Crvsade: Zero, (I seem to be using variations of the word “monster” a lot in this review), but I can see the album being polarizing in some ways within the fanbase. The slower tracks run a little too long for their own good, and because they are packed together up front they unfortunately may seem to become a bit like a blur. But as with any disc by a band this talented, there are always songs that make the whole run worth it, and Crvsade: Zero has its fair share — which means that the disc is a huge challenge up front, but after that I could see listeners darting for songs like “Rise Omega”, “Dawn Of War”, “Hate Is The Law”, and “Valley Of Darkness” before full spins happen again.

Hate have managed to make themselves sound huge on this album, an impression that’s amplified by the album’s cold and mechanical feel, and since they play it so close to home, they’re obviously using a formula that works. On Crvsade: Zero it feels like Hate are bathed in black and cloaked in the night. There’s no ritual to be found here, just destruction in its purest form. They’ve distilled their music down to a pure, gear-filled creature that has no idea what the words “sleek” and “organic” mean.

I can’t imagine that there is any real finesse when cities are being destroyed, with huge explosions and tons of collateral damage, and that is Crvsade: Zero in album form. It’s a city-sized creature appearing from nowhere and flattening everything around it with each step. It doesn’t pick up the pace as much as I would like, but Hate have still found a way to make a damned good album this time around. Crvsade: Zero cares nothing for atmosphere; it aims only to achieve its intended goals — complete and utter annihilation.

Crvsade:Zero will be released on February 2nd in the UK and February 10 in North America on Napalm Records. It is available for pre-order from the Napalm web store and from Amazon and iTunes.