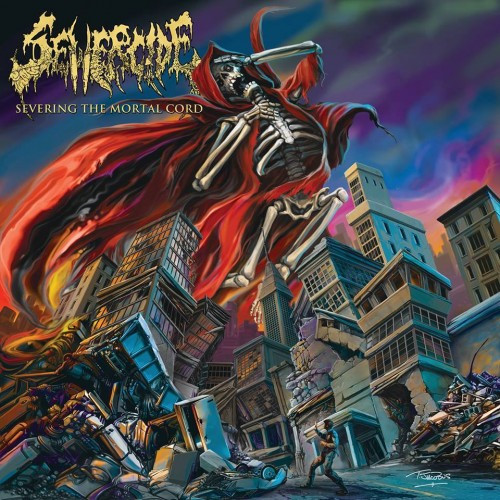 Talk about eye-catching cover art! What you’re looking at above is the creation of Tim Jacobus (Goosebumps) and it graces the new EP by Australia’s Sewercide, entitled Severing the Mortal Cord. This is the band’s sixth release overall, following a demo and four splits, and it delivers five full-throttle blasts of mayhem — one of which we’re about to premiere.

The song’s name is “Hypothermia”, but there’s nothing cold about it. It’s a gritty, brawling blast of high-voltage death/thrash loaded with a hornet swarm of vicious riffs, gut-punching bass, and rambunctious percussion — and highlighted by a fret-burning solo that will singe your eyebrows. In keeping with the balls-to-the-wall atmosphere of the music, the vocalist sounds like he’s on a straight liquid diet of lye and pure, concentrated ethanol. 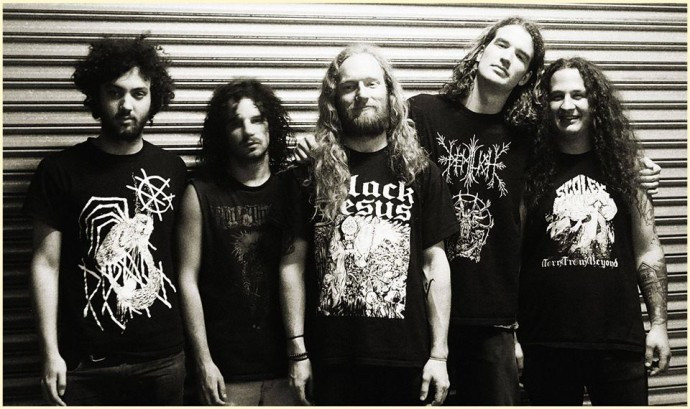 “Hypothermia” isn’t the only piece of riff-driven bedlam on the new EP. All five songs are a riot, fueled by punk spirit and anchored by some mighty grooves that are sure-fire headbang triggers. Jumping on this beast for the full ride may leave you breathless by the end, but we’re betting there will be a stupid grin on your face when you stagger off, because it’s as much fun to hear as it is rough, raw, and vicious.

Severing the Mortal Cord will be released on February 24, 2015, by Australia’s Infernal Devastation Records and can be acquired via the Bandcamp link below. And speaking of Bandcamp, two more tracks from the EP are up there for streaming, so we’re including them along with the song we’re premiering today.

Finally, we tip our hats to Transcending Obscurity PR for turning us on to these maniacs.