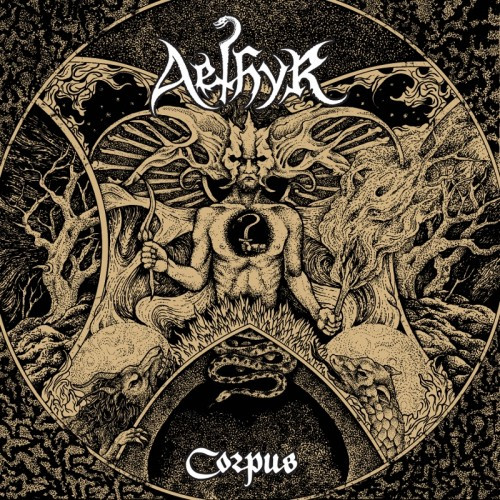 Five years after their debut album Messio and three years after their last release of any kind, the Moscow doom band Aethyr have returned with a new full-length entitled Corpus. In advance of its February 19 release by Cimmerian Shade Recordings, we’re pleased to being you a full stream of the album in all of its staggering immensity. But I need to immediately apologize for calling Aethyr a “doom band”, because the music on Corpus is not so easily summed up.

Across the seven tracks and 50 minutes of music that make up Corpus, Aethyr integrate elements of black metal, sludge, and ambient noise into their core framework of titanic doom. The musical landscape changes as the album unfolds, but never leaves the blasted territory of hopelessness and ruination. 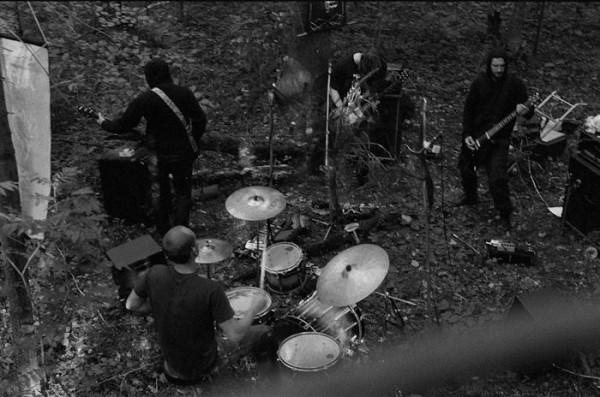 The opener “Nihil Grail” is perhaps the most bleak and crushing track on the album. It moves at the pace of beleaguered refugees trudging into an unknowable future, saturated with the thick ichor of gloom and laced with writhing tendrils of despair. The anguished vocals, which are never less than gripping on the album, veer from the sound of glass shattering to heartless, hollow roars. At the end, the vibrating whirr of tremolo guitar and the eruption of blast-beat drums hint at the further blackening to come.

But though the album’s atmosphere remains as dark as a moonless night, Aethyr follow a crooked path. “Sanctus Satanicus” follows “Nihil Grail” with a more animated pace, the drums beginning to clatter and somersault, the big magnetic riffs verging on stoner doom. As slow, desolate, and bereft as the beginning of “ATU” is, it includes an enchanting guitar melody (though the atmosphere is still melancholy to the core) as well as an accelerated instrumental section that feels almost like post-metal.

And there’s more — the 10-minute title track is a journey all its own. The atmosphere of its opening is strange and otherworldly, with uncomfortable electronic sounds coming and going like unhinged alien life forms, and that paves the way for a phalanx of morbid riffs melded with an infectious drum rhythm. Listening is like sinking in quicksand — before you know it, you’ve been sucked in by the slow pull and you’re up to your neck, gasping for breath. The urgent trill of the tremolo melody that comes in late, it’s like the last glimpse of light before the last of you sinks away.

The persistent pounding drumbeat at the start of the closer “Templum” feels like the driving of coffin nails, and things don’t get much cheerier as massive low-end riffs grind away remorselessly. But those chiming post-metal guitar chords, they do get their hooks into you and they don’t let go — which means you’ll be rooted in place when the song takes off in a rush of unaccustomed acceleration and a blaze of rippling guitar. It’s a damned infectious way to finish an album of such unrelenting heaviness.

Corpus may be thoroughly saturated in the thick aura of doom, but within its perilous universe it provides a dynamic and wholly engrossing listening experience. The order of the songs is as interesting as each of them individually — the album never loosens its grip on the senses, even as it pulls them into the pit.

Aethyr’s Corpus is available for order at either of the locations linked below. Aethyr’s Facebook page is at this location.