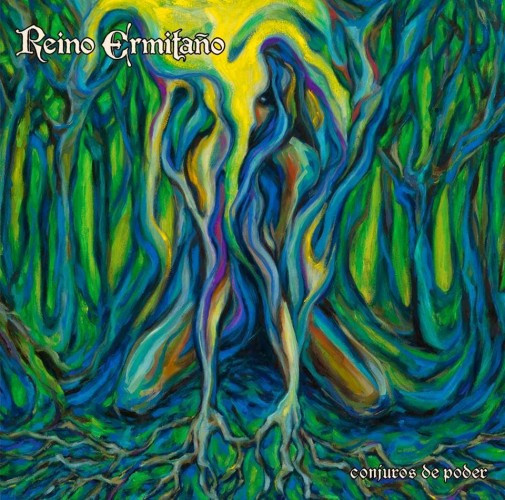 (Comrade Aleks, whose name is usually seen in our pages because of the interviews he delivers, has now brought us a review of a most interesting album by the Peruvian band Reino Ermitaño.)

Peruvian shamans of traditional doom Reino Ermitaño have a consistent approach to their work throughout, and they’re always loyal to their roots and folk traditions. I think that is one of reasons why, step by step, the band have created stable and quality stuff since 2001, improving their skills and succeeding with new, authentic records. Reino Ermitaño’s last album Conjuros de Poder was released in autumn 2014 on the band’s own label Ogro Records right before the start of their European tour.

The title of the album translates as “Spells of Power”, and they’re not empty words. For those who hear the band’s name for the first time, I need to tell that the key elements of Reino Ermitaño’s music are heavy, doomy riffs, highly enthusiastic and profound guitar solos, the strong and seditious vocals of Tania Duarte, who sings in Spanish, and lyrics on mystical topics enhanced by elements of tribal melodies and rituals. But first of all, Reino Ermitaño play doom. 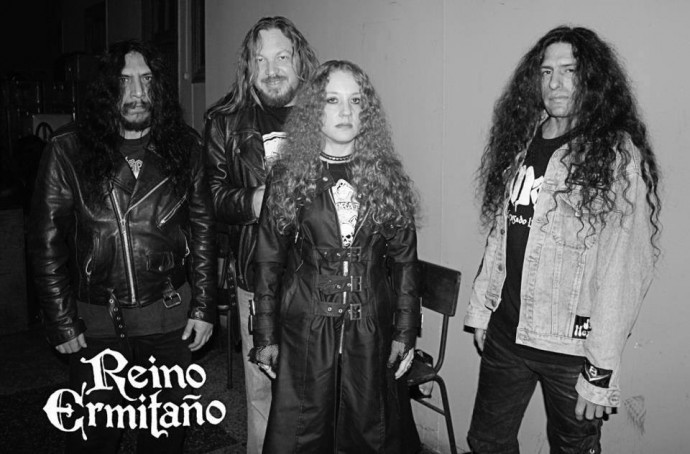 The members of Reino Ermitaño have experience with local tribes’ rituals involving the sacred drinking of Ayahuasca, so maybe therefore the first track was named “Calendula” due to the promotion of herbal medicine. It’s a common track for the band, with a mid-tempo pace that speeds up from the middle of the song and returns again to a slower, hypnotic pace accompanied by Tania’s conjurations.

The second track “Ancestral” continues the line of its forerunner, yet here I would like to mention the highly influenced and fierce guitar solo of Eloy Arturo, who spreads a really impressive rocking melody. “Abraxas” suddenly appears as an unusually dynamic metal track with drastic sound; it comes right in time because the next two songs, “Estigma de Cain” and “Circe”, have a dominating doom pressure line that you can feel sharply before getting some relief in the form of a brief acoustic interlude in the final part of “Circe”.

Reino Ermitaño improve themselves time after time – in their hands trad doom isn’t boring stuff; they always have something to add to make monotonous riffs sound exciting and fresh. Just check out the song “Kali” — it starts with sitar tunes and then the melodies turn into some kind of ritualistic stoner rhythms. Bulky, deep, and full of vibration, “Chankapiedra” follows the tempo and direction of “Kali”, preparing a ground for the fantastical tribal song “En mi Mente” with some flute tunes and shamanic chants in the end.

“En mi Mente” was composed by Reino Ermitaño’s drummer Julio. He comments: “I wouldn´t say it was ‘composed’, but rather something that came to me during an Ayahuasca ritual. The melody presented itself as a constant riff, without changes, a heavy mantra that deserved to be a song. In that moment everything was pure and spiritual”.

The song’s lyrics are poetic and inspired. It reminds me of a heathen prayer complemented by a mesmerizing melody:

“In my soul, in my mind
There we go, Ayahuasca
I go curing, I go healing
I go strolling, I go singing
Through the jungles, through the forests
Through the mysterious Andes
I live on top of the mountains
With the entities of my dreams”.

We all had a wide input of very different songs… I think our guitarist Eloy came up with some golden rocking material as usual and laid down some of his best guitar solo work yet, Tania (vocals) reached into some new and distant mystical depths with “Kali” and the epic and somber “Stigma of Cain”… Ñaka’s (drummer) nine-minute, one-riff Ayahuasca mantra has a will of its own and it builds momentum in a hypnotic way we hadn’t tried before… inspired stuff. As for my own things, I went a bit dark and oppressive with new songs “Calendula” and “Circe”, each in their own way… one more despairing, the other more sinister, perhaps.

Reino Ermitaño keep true to themselves with Conjuros de Poder. They do not search for extremes and continue to explore high-quality traditional doom metal, decorating it here and there with parts of local cultural traditions and hard-rock legacy. The new stuff sounds strong and solid. From the artwork done by Marcos Coifman, as usual, up to the melodies and lyrics, it’s complete and full of sense. Check it if you’re searching for some authentic, original doom music.