(Andy Synn penned this review of the new album by Germany’s Porta Nigra.)

Inspiration is an unpredictable mistress. You can never be sure when, or how, she’s going to strike.

I hadn’t planned on reviewing Kaiserschnitt, not consciously anyway. Even though I still have a lot of sick love for Fin de Siècle, Porta Nigra’s devilish debut, I initially intended to listen to their latest release merely to satisfy my curiosity. After all, I had other, more important things to be focussing on.

Or so I thought.

As I said, inspiration strikes at the oddest times and in the strangest of ways, and from my first listen to the album I found myself making up the disconnected mental notes and disordered comparisons which, ultimately, have come together to make up this review. I couldn’t have predicted it, I certainly hadn’t planned on it, but here we are anyway. 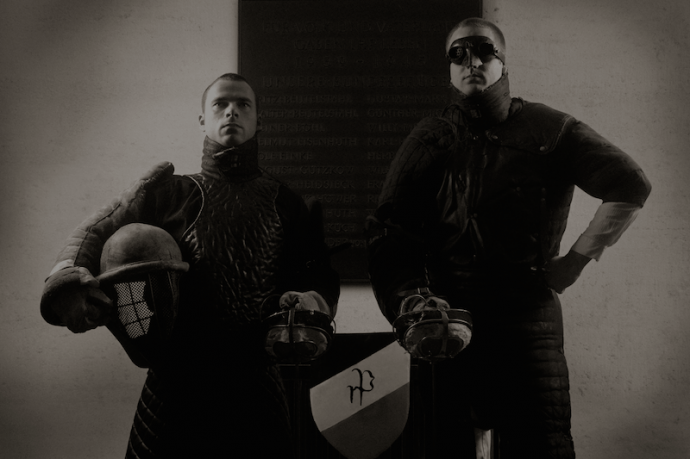 If you’re unfamiliar with these Germanic derelicts, they deal in a form of shamelessly weird and purposefully obscure Black Metal that seems far more interested in challenging expectations than it does in upholding established traditions.

Indeed, just calling the band “Black Metal” seems something of a misnomer, as the psychedelic psychosis of their sound has more in common with the off-kilter strangeness of Solefald than it does the old-school savagery of Sargeist… in fact, the band’s own label (the ever eccentric Debemur Morti) refer to their style as “Decadent Dark Metal” – which I suppose is as good a descriptor as any other to apply to a band who so resolutely refuse to be boxed-in and defined by the expectations of others.

If anything, Kaiserschnitt sees the band irradiating and mutating their sound even more, the songs contained within sounding like the bizarre, mutated product of some horrible military experiment designed to weaponise weirdness.

Dealing, conceptually, with the horror and history, the glitz and the glamour. and the morbid megalomania of the German empire of the early 1900s, there’s a malicious method to the madness underlying every song, and a seductive, strangely hypnotic vibe which permeates the album’s nine tracks of non-conformist, musical malevolence.

From the twitchy, stabbing riffs and ominous atmospherics of “Die Mensur” to the slinky, strip-club sadism of “Femme Fatale”, the band revel unashamedly in their own carefully cultivated insanity. Vocals bark and shriek and rant and rave beneath a torrent of jerky, juddering guitars and abstract, schizophonic melodies, while unsettling samples and snatches of esoteric dissonance weave in and out of the band’s heaving, metallic brew. 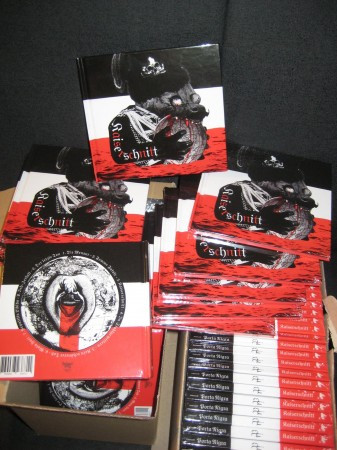 Truly, no two songs on Kaiserschnitt really sound exactly alike – in tone, in mood, in structure – yet they’re all clearly a product of the same deranged minds.

While the title-track is a mesmerising march of slithering, hedonistic grooves and melodramatic, multi-voiced vocals, “In Stahlgewittern” is a heavier, harsher affair of machine-gun rhythms and barking, bull-mastiff aggression (with some unexpected moments of unexpectedly melodic, unconventionally majestic, melody), and “Mata Hari” a lurching, art-house explosion of jamming, jerky riffs and wild, splattering emotions, building to an immaculately conceived penultimate melodic peak.

Although very much its own mutant musical beast, Kaiserschnitt does have a few things in common with mysterious Norwegian Meta-Black Metal weirdniks The Konsortium, in the sense that both bands seem to simultaneously embrace and reject the genre from which they were born, stretching and bending the rules of acceptability to the point where the boundaries between different sounds and genres blur into insignificance.

“Hepatitis Libido” is perhaps the most conventional song on the album (though, as with all things regarding Porta Nigra, that statement should be taken with a grain of salt… and perhaps a dose of arsenic), with its smooth mix of scalpel-bladed riffage and eerily melancholic melodies – although the erratic, evocative vocals continue to grant the track a suitably unorthodox edge of morbid melodrama – and it’s followed by the venomous, black-clad swagger of “Ich Zerfall”, which struts and shakes and shivers with predatory intent, baring its teeth in harsh, ear-stinging harmonics and raw-throated, animalistic shrieks.

The album culminates with the almost eight-minute exploration of sight and sound of “Der letzte Ton”, whose initial cascade of rippling, post-Black Metal riffs, rock-solid drum beats, and soaring clean vocals set the stage for a series of enigmatic eruptions of apoplectic anguish and aggression, screaming and raging, roaring and convulsing, amidst a cinematic concoction of chiaroscuro light and shade.

Perplexing, disturbing, and most assuredly more than a little strange around the edges, Kaiserschnitt offers up a compelling and unapologetic argument in support of the idea of art for art’s sake, delivering nine tracks of unique, uncompromising weirdness and wonder, a series of esoteric anthems for the lunatic fringe.

Kaiserschnitt will be released by Debemur Morti Productions on March 9, 2015, and it’s available for pre-order here. You can find Porta Nigra on Facebook at this location, and below you can listen to “Femme Fatale”, which was released as a single earlier this year: