Not long ago we included a feature about the title track to a new album by Poland’s Kurhan in one of our occasional round-ups of impressive new songs. Now we have the pleasure of bringing you a full stream of the entire album, the title of which is Głód (“hunger”).

When I first heard the title track, it really grabbed me by the jugular. I compared it to taking a ride on a whirlwind, or something like being caught in a swarm of bats embarking on a night of feeding at full speed.  But in addition to unleashing a plethora of technically impressive high-speed riffs and hard-hitting percussion, Kurhan made the song a rhythmically dynamic work and threaded appealing strands of dark melody into their blazing tapestry as well.

Now having heard the entire album, more metaphors come to mind. Listening to it is like being dropped into a war zone, with shrapnel flying fast and furious and bursts of adrenaline flooding the bloodstream from all the imminent peril. 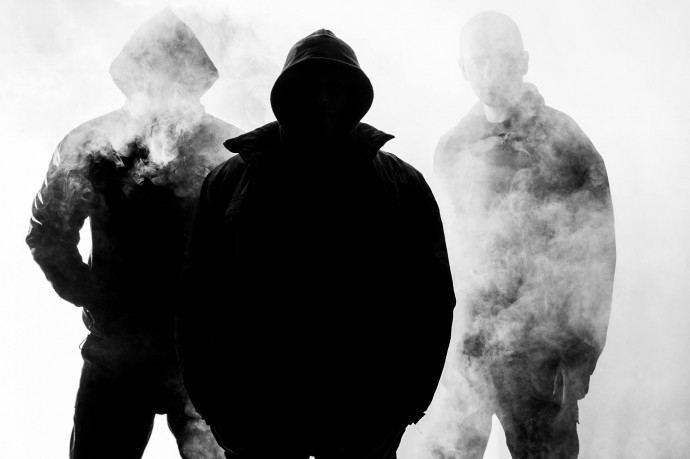 But the music isn’t just an onslaught of blackened death metal destructiveness. In addition to being turbocharged and technically impressive, the riffs are catchy as hell — they rock and as well as rake, and there’s a feast of headbang food in this banquet. You’ll get an immediate taste of that in the opening track, “Porządek”, and more servings lie ahead as the band frequently move from furious, thrashy, tremolo-picked lashing to rhythmically compulsive chord patterns that will get your whole body moving.

And the band are also adept at churning out heavy-as-hell death metal grinding, like an industrial-strength concrete pulverizer, as well as jumped-up, punk-influenced romps and brutal chug-tests. Even when they slow the pace, as they do briefly at the start of the album’s sixth track “Czas” and during the closing juggernaut “Koniec”, they don’t lose their grip on the back of your neck.

The drum and bass work is just as compelling — just as jet-fueled as the guitars, just as dynamically variable, and just as capable of shooting megawatt jolts of electricity straight into your brainstem.

While I’m doling out the accolades, I have one for the vocalist, too:  His throaty snarls and yells are not only feral and ferocious, they’re inflamed with passion. Which is just what you want and need, given the balls-to-the-wall exuberance of all the instrumental performances (and you don’t need to speak Polish to appreciate the vocal performance).

And on top of all this, the songs are really well-written — they’ve got character, they incorporate dynamic changes in style, they include enticing doses of bleak, morbid melody — and did I mention that they’re catchy as hell?

Kurhan tip their hats (or hoods) to a lot of old school metal styles on Głód, but you’ll be hard-pressed to find any debut album this year that integrates them as naturally or as well as this one. Especially for a first full-length record, Głód is truly impressive and a whole hell of a lot of fun.

Głód is due to be released on March 5 via Arachnophobia Records and is available for pre-order here.

3 Responses to “AN NCS ALBUM PREMIERE (AND REVIEW): KURHAN — “GŁÓD””