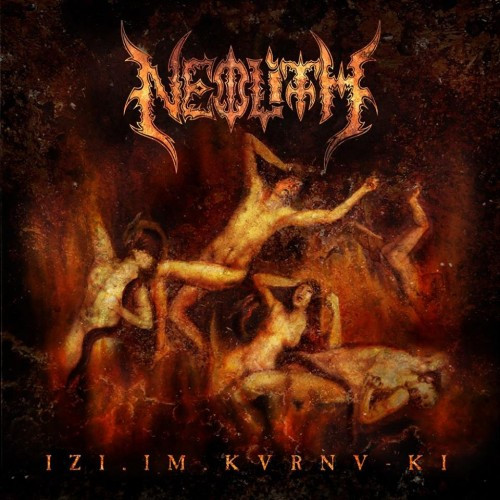 We’ve had the pleasure of premiering two decimating new songs by the Polish band Neolith from their fourth album, Izi.Im.Kurnu-Ki. — and today we have the privilege of helping to premiere a stream of the entire album on its release day.

As good as those first two songs were (“Of Angel and His Orison” and “Enlil”), the album as a whole is equally good. It’s a dynamic combining of melodic death metal and black metal, both atmospheric in its creation of a chilling, infernal aura, and absolutely pulverizing in its frequent explosions of grinding/thrashing riffs and hammering grooves.

The band make effective use of keyboards throughout the album, principally to enhance the music’s eerie atmosphere, but also to help the guitars carry the infectious melodies that move like slithering serpents through the high-speed bombardments and strafing runs that Neolith unleash.

There’s a lot of technical skill on display — the drumming on the album is particularly jaw-dropping, and the guitar and bass performances are equally jet-fueled and electrifying. To top it off, the vocals are utterly scathing, whether howling like a wolf or roaring like a bear.

“Electrifying” is the word that really has most frequently popped into my head as I’ve listened to this album. With only one brief respite (the echoing, dreamlike, keyboard instrumental “Inferludium”), Neolith deliver a galvanizing megawatt charge from start to finish, whether they’re engaged in infernally majestic stomps or blazing away like an unquenchable conflagration.

Izi.Im.Kurnu-Ki is being released today Non Serviam Records, and the album is available for order now at this location, or at Bandcamp via the link below. Stream the album below.

One Response to “AN NCS PREMIERE: NEOLITH — “IZI.IM.KURNU-KI””