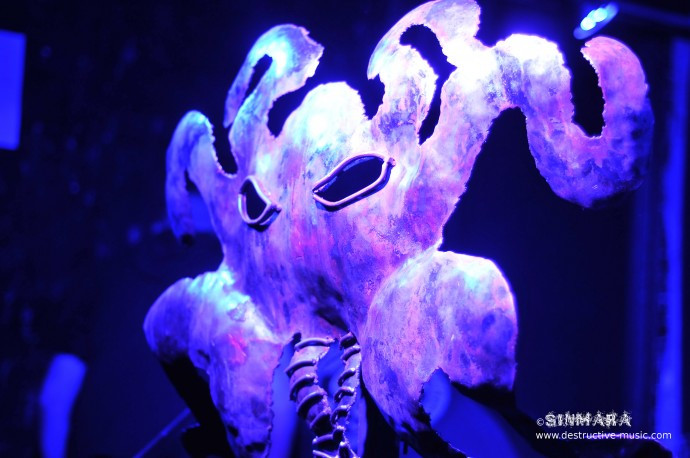 (Andy Synn reviews the recent performances in London by The Great Old Ones, Bast, and Conjurer.)

Sometimes life hands you difficult choices. Case in point, Saturday I was torn between two fantastic shows down in old London town… Vader/Hate at The Underworld and The Great Old Ones at The Black Heart. What is a boy to do?

Seeing as how I selected Tekeli-li as one of my top 10 albums of last year (Critical Edition), and acknowledging the fact that I’ve seen both Vader and Hate before, I chose to plump for France’s acolytes of the great unknown, at the risk of my sanity and my very mortal soul.

But I’m getting ahead of myself here…

Up first this evening were Conjurer, a band I confess I knew very little about beforehand, beyond a few faint whisperings through the grapevine promising good things. And by god were those whispers on to something.

With an unerringly tight, punishingly heavy, and above all endlessly dynamic, sound, the unassuming Midlands-based quartet brought their absolute A-game, positively bludgeoning the assembled audience with a gargantuan wall of savage, stunning noise.

Though the band are described simply as “Sludge Metal” on their webpage, I honestly feel like that’s insufficient to capture the sheer weight and depth of their sound. Erring most closely to a sort of Triptykon-style Doom and Gloom, but with added moments of morbidly brutal Stockholm-esque Death Metal riffage and staggeringly vicious segments of pure blackened fury – all without sounding like a simple hodge-podge of stapled-together influences – I’d be tempted to describe them as something along the lines of “Monolithic Titan Doom” if I weren’t so concerned that it might be read as pure hyperbole.

Either way, you owe it to yourselves to check these guys out, particularly in the live arena, as they damn near stole the show.

Tasked with the unenviable job of following the opener’s surprising dose of shock and awe, London sludge-mongers Bast stepped up to the plate to unleash their own particular brand of audible Armageddon on the steadily swelling crowd, diving head-first into a murky pool of fuzz-soaked riffs and slime-drenched bass lines.

With their hazy, almost freeform approach, the three-piece largely eschewed the more song-focussed approach favoured by their younger predecessors, and instead delivered their set as one vast movement of buzzing feedback, growling, undulating bass lines, and bellowed vocal lines, all locked down by drummer/vocalist Jon Lee’s blitzkrieg bombardment of doom-laden beats.

The band barely paused for breath between one track and the next, allowing blooming waves of distortion to overflow the edges of each song, blending and blurring the lines between them, meaning that the end of their set snuck up on the audience without warning, yet left a very lasting impression all the same. 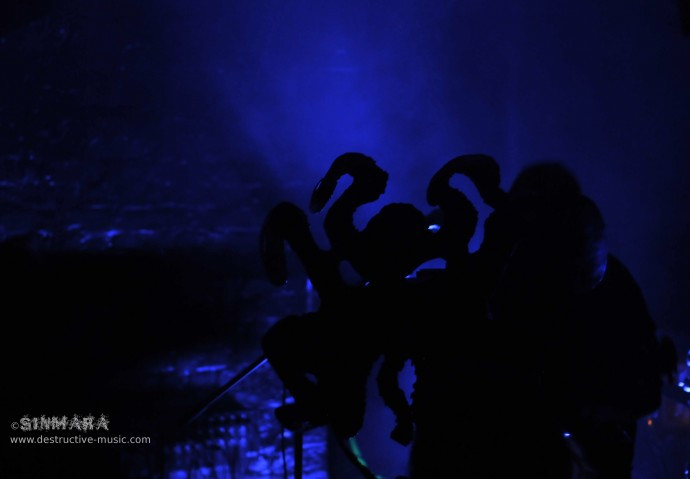 If I had to pick one word to describe The Great Old Ones it would be… intense. Intensely heavy, intensely atmospheric, intensely… intense.

With three guitars, one bass, one drummer, and two members sharing vocal duties, it only took a minute or two of the band’s glorious cacophony to demonstrate just why they were the night’s headliners, overwhelming the enraptured audience with glacial tides of dense distortion and frostbitten melody.

The front of the stage was dominated by a strange, Lovecraftian icon, behind which the five members of the band – hoods pulled high and instruments clasped tightly – conducted their sinister sonic ritual, conjuring a sense of otherworldy menace and creeping, unearthly horror with every skittering blast-beat and frenzied, many-angled riff.

Pulling songs from both their albums (2012’s phenomenal Al Azif and last year’s game-changing Tekeli-li) the band’s set was one long, unbroken procession of sound and fury, signifying something terrible… a blazing cascade of black fire and chilling ambience, with moments of icy calm scattered amongst the savage blasts of caustic distortion.

The band acknowledged the audience only once, with a simple thank you, right at the very climax of the evening, instead allowing the music to do all their talking for them. And talk it did. In a language not quite human, but with a message that came through loud and clear.

Ignore The Great Old Ones at your peril.