(In this post, Grant Skelton reviews the forthcoming debut release by Foehammer, which has taken us by storm here at NCS.)

2015 is shaping up to be a good year for doom metal. The recently reunited Goatsnake have a new album due out on Southern Lord in June. That record label likewise just remastered and rereleased Warhorse’s buried gem As Heaven Turns To Ash (thanks to blend77 for turning me on to that!). Ahab are back in the studio crafting some new opus of seafaring sorrow. Most recently, I became hooked on a certain drum-and-bass duo from Seattle whose disconsolate dirges channel spirits of those who met untimely ends (Bell Witch). Also, Hooded Menace have absconded to whatever crypt they slithered from to record something new. The last I read about Sourvein, they were finishing up recording vocals for their new album. While my musical palate for doom has yet to be satiated, the latest morsel whetting my appetite is the debut self-titled EP from Annandale, Virginia’s Foehammer.

I first learned of Foehammer when Islander posted a Miscellany roundup that included them (here). That post introduced Foehammer with a song called “Stormcrow,” one of the names of Gandalf from Tolkien mythology. In the Tolkien universe, King Théoden christens Gandalf with that title because his arrival usually bodes ill for the denizens of Théoden’s kingdom. And the Tolkien references don’t stop there. The name “Foehammer” comes from a translation of Glamdring, a sword which proves most deadly in Gandalf’s employ. Storms of crows and hammers of foes are accurate imagery to describe this band’s music. 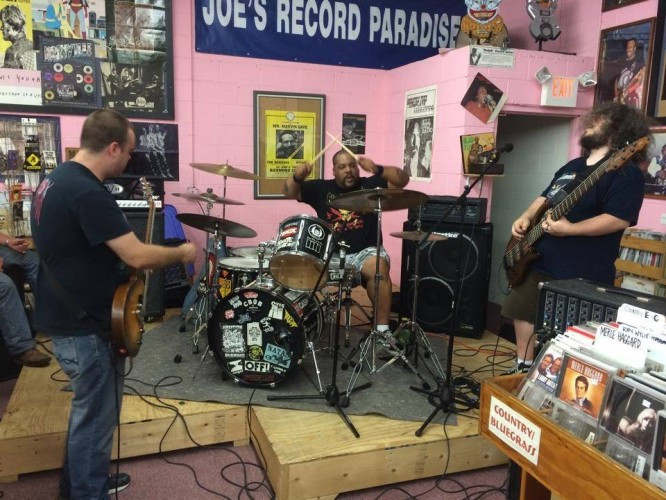 The EP opens much like a thunderstorm. A faint, but audible rumble. An echo of sound in the distance that requires you to listen for a louder iteration. Impenetrable cumulous clouds settle overhead like a pale blanket of unrealized grief. “Final Grail,” the album’s first track, volleys a bombardment of riffs upon the listener. A torrential deluge of clangorous drums, quaking bass, and a guitar tone that churns your intestines to butter. Something awful is coming, but by the time you realize it’s here, you’re dedicated to the song and it draws you in. You can’t seek shelter.

By the time this album is done, there won’t be any shelter left. This IS funeral doom after all. If there is shelter left after Foehammer’s storm dissipates, it will be in the form of a mausoleum. Approximately 5 ½ minutes in, “Final Grail” gets a little mellow ambient guitar break before a clap of thunder signals another lugubrious cloudburst. Expect a brief, but very enjoyable guitar solo toward the end of the song.

“Stormcrow,” is the album’s second track. You’ve likely heard it by now. If you’re anything like me, you went traipsing around Grimoire Records’ Bandcamp page months ago trying to purchase that song. Eventually I found out that Foehammer had made a demo version of the song available on their own Bandcamp page. Unfortunately, the demo is but a skeletal artifice compared to the EP version of this woebegone lament. If this song had been included in any of the LOTR films, Sauron would have won on principle alone. This song is heavy. Not heavy like Wayne and Garth heavy. Heavy the way that Giles Corey understands heavy.

The album’s final track is a ghastly and cyclopean wretch of a song called “Jotnar.” I use the term “cyclopean” very specifically, as I understand that “jotnar” were giants of Norse mythology. At 14:29, the song violently careens like a train derailment. It lives up to its name in every regard. It’s a gigantic, lurching, drudging grotesquerie that will grind your bones to make its bread. This is the song to play on repeat to annoy your neighbors… or to completely decimate their house and everything in it. Rather than slaughtering the listener to ribbons with proggy or techy song structures, Foehammer prefer to stack brick on top of brick. The listener is subsequently encased alive behind the band’s woeful wall of sound.

I’ve mentioned before that music like this requires an investment from the listener. Much of the music that is featured here at NCS requires such an investment. We metalheads enjoy music that often is not “pleasant” to listen to. You can’t listen to Foehammer the way you would listen to Top 40 pop radio. This music cannot be listened to passively as background noise. I appreciate bands like Foehammer releasing longer songs like those on this EP. Sometimes you need an invitation to shut off all the other distractions around you and really plunge into music. I know as we get older that becomes less and less feasible. Jobs, family obligations, and other relationships take up a great deal of time. But this is a release that I encourage you to make time for.

I try to write my reviews without comparing bands to other bands. But, in keeping with the spirit of NCS, there are always exceptions. Therefore, if I made a list of possible candidates for this generation’s incarnation of Sleep’s Dopesmoker album, Foehammer’s debut EP would definitely be a candidate.

Preorder the EP from Grimoire Records’ Bandcamp page below (release date April 7). The digital version is only $6. If you order the CD version ($7) you also receive the digital version.
http://grimoirerecords.bandcamp.com/album/foehammer