Last month we had the pleasure of premiering the final track on the new album by Sweden’s Gloson. Now we bring you a premiere of the entire four-song EP: Yearwalker.

Gloson drive like a V-8 Interceptor across the wasteland, but not as fast. Speed is not the object, the destination is not the point. The point is the relentless hammering of the pistons set against the desolation of the surrounding vistas, and the hypnotic power of the melodies.

Gloson’s engine is driven by thick, vibrating sludge riffs, prominent bass lines, and spine-shaking drum beats. In each song the band establish a repeating motif in the low end and then drive it forward inexorably, relentlessly pounding their messages of gloom and woe like the chanting of a mantra. But as powerful (and powerfully hypnotic) as these repeating motifs are, they are not the whole story. 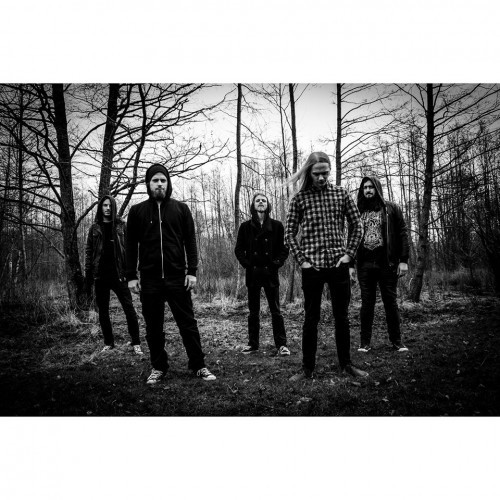 Reverberating guitar melodies rise up above the slow, driving undercarriage, sometimes like swirling mist, sometimes like thick, oily smoke, sometimes like the drifting of passing clouds on a sun-dappled afternoon. They provide an almost ephemeral atmosphere that contrasts sharply with the ever-present anvil blows beneath them, as if to say that something transcendent may yet be found beyond the passing vistas of desolation and decay.

And to add yet another dimension to the sound, enhancing the music’s overarching aura of ominous threat, the vocals resemble the hair-raising snarls of a rabid wolf or the horrifying roars of some enraged beast.

This is very heavy music, but Gloson are far from a one-note band. By way of example, the second half of the album’s longest song, “The End/Aftermath”, is simply beautiful. Accented by strong clean vocals, it is devoted to a melody that becomes increasing seductive and entrancing while subtly changing in its character. It persists like the memory of a shattered happiness, eventually dissolving into the shimmer of ambient sounds.

Yearwalker is a highly successful union of sludge and post-metal that’s both deeply atmospheric and primal in its bone-rattling power. Originally self-released in digital form last year (it’s still available as a download on Gloson’s Bandcamp page), it is now being released on vinyl by Art of Propaganda and Catatonic State. Relevant links are below, followed by our stream of Yearwalker.
https://www.facebook.com/Glosonswe
http://gloson.bandcamp.com/releases