It would be sad if Sulphur Aeon’s new album failed to live up to the vivid Lovecraftian power and richly imagined detail of the cover art that Ola Larsson created for it. Thankfully, the sound is more than a match for the imagery: Gateway To the Antisphere is one of the most terrifying, and hands-down one of the best, death metal albums of this year. Today we have the privilege of streaming it for you in full.

Sulphur Aeon have mastered the art of seizing the listener’s imagination and hurling it through an inter-dimensional membrane into a dark place where you feel the writhing presence of monstrous forms. They seem to have a direct channel to R’lyeh and the Outer Gods. At the same time, they are equally adept at crafting immensely powerful and electrifying death metal songs.

On a purely technical level, the instrumental and vocal performances, and the production, are exceptional. The flensing riffs are fleet and savage, the eye-popping drumwork is precise and varied, and the vocals are multi-hued but never less than voracious. The production delivers these combined forces with clarity and galvanizing potency. 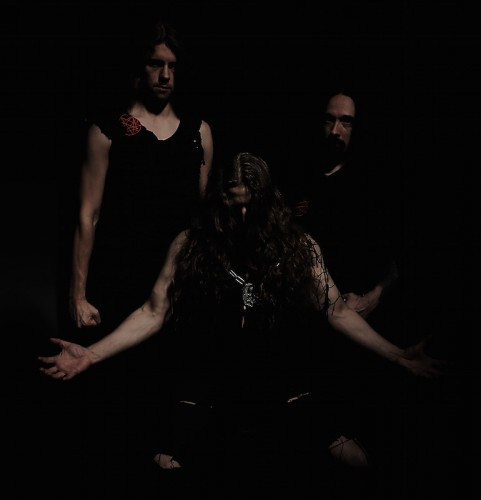 Apart from the technical skills deployed in this effort, what really makes the album stand out from the pack is the quality of the songwriting. The compositions are intricate but they never loosen their iron grip on your attention. In this case, the complexity simply gives listeners a reason to come back and hear the album again and again, because each listen reveals new discoveries. The band also display an astute grasp of rhythmic dynamics — the music stays in close contact with that primal part of the brain that wants to make you move in the presence of sounds such as this, even while the thinking part of your mind is trying to wrap itself around what it’s hearing.

But perhaps the band’s signal accomplishment on this album is their creation of exotic melodies that stand out and stay with you. Many of them have an Eastern flavor, but twisted in a way that conjures imaginings of the supernatural, and at times (on songs like “He Is the Gate” and “Into the Courts of Azathoth”) they reach heights of panoramic magnificence.

I can think of a few bands — and only a few — who are truly driving death metal in fascinating new directions, and Sulphur Aeon are in the vanguard of that movement. Both vividly atmospheric and almost physically arresting in its impact, Gateway To the Antisphere is Sulphur Aeon’s crowning achievement and will surely stand as one of this year’s best extreme metal albums.

Oh hell, what am I saying? This one, we’ll be listening to for years to come.

Gateway To The Antisphere is due for release on April 3 by Van Records and Imperium Productions.

6 Responses to “AN NCS PREMIERE: SULPHUR AEON — “GATEWAY TO THE ANTISPHERE””