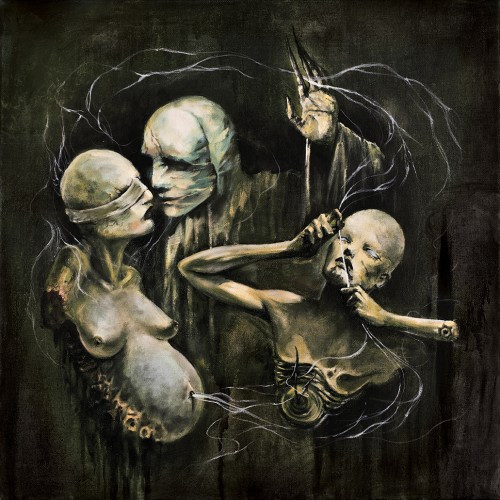 (We welcome back guest contributor Gorger, who reviews a new split release by three Greek bands — Awe, Vacantfield, and End. For those with Scandinavian linguistic skills, check out Gorger’s Metal.

Me writing this post was triggered by the fact that this release was leaked more than a week prior to the release date. What kind of a person with actual love for metal would even consider doing such a thing? I can, to an extent, understand why some people download (that is a different discussion altogether). However, I can not understand those who supply others with pirated metal. Is it the need for admiration? To be respected like some generous Santa? At least bloody wait ’til the album’s released, you fucking retard!

But I’m not going to do a lecture on the subject of pirating. Rather, I’m going to promote this split and give three good bands some well-earned attention. What you see above is a marvelous rendition of the Moerae. Don’t worry, you’ll find out soon enough. It was painted by Vamon VII, who also created the rest of the gatefold paintings.

Three Greek black metal bands with varied years of experience each contribute to present one (approximately) 17-minute-long song. All of them offer rawness, intensity, and suggestion (hypnotic, that is), and the tracks suit each other surprisingly well, despite differences in production, which is something that is also fitting, as they are bonded together by a concept. It feels natural to do this short review, song by song, band by band.

Moerae are the three fates in Greek mythology. The similarity with the corresponding Norns in Norse mythology is striking. The myths of the Moirai, the Norns, as well as the Fate goddesses of Roman Mythology, seem to have a common source, but its native soil does not seem to be certain. The duty and task of The Three Fates were to spin, measure, and cut the human thread of life, and even the gods had no power to overrule fate. Man’s fate was his destiny, predetermined by Moerae.

The song Clotho is Awe‘s first release, except from a short song on the compilation album Mono Maniac vol.4 released by Blast Beat Mail Murder last September. There’s little information about the band, but they have been around since 2007, they have recently signed with Pulverized Records, and the work on their debut album Providentia is completed. Clotho is dedicated to the Fate goddess of the same name. She is the youngest of the three, and spins the thread of life.

The song is long, but wastes no time blasting straight into cacophonous landscapes. Intensity and monotony persist awhile before jazzy arrangements emerge. These are eventually replaced by moderate avantgarde sound-collages before hell again breaks loose.

Vacantfield has existed since 2001 and spent ten years before releasing a very good EP, titled Iteration, on Duplicate Records. Two of the members have been in End and two more still are. This band has also contributed a song on the aforementioned Mono Maniac vol.4.

Lachesis is the second Fate goddess. She measures out the length of the thread of life. Vacantfield start just as battering and assaulting as Awe, and eventually prove that the “experimental” character of the EP is still a part of their signature. To my highest appreciation that is, for in the midst of the myriad of bands and releases, to stand out requires some distinguishing marks. Gradually, different melody lines are formed, kept in the background, secondary to the dominant frenzied savagery. They are still there, for those who listen, and they help to create a hypnotic stage.

End was formed one year after Vacantfield, but their discography consists of three full-length albums. Atropos is, as you’ve already guessed, the name of the sister with scissors. And it’s not the umbilical she slashes, truncates, and cuts short. End provides ferocious frenzy too. During their rabid speed-attack, they’ve got a scent of hatefulness about them, partially thanks to the most classical black and vindictive vocals on this split. The pace gradually attenuates, first via mid-tempo, then further into sticky notes, and finally in an almost stagnant ambient moorlands, halfway into the song. When the music abruptly returns to its normal angry self, the saga of the Moirai is concluded by varied and very good charcoal black metal.

Destiny is apparently not particularly cheerful, judging by the character of Moerae. The destiny of Moerae has had some bad luck with its destiny itself. Not only has it leaked, but the vinyl pressing is also running late. Thus, fans of rotating, spiraling, synthetic plastic polymer plates with 95.75 cm circumference, have to wait until June. I’m not totally sure about the CD-pressing, but I do hope it is ready for sale. Moerae was digitally released less than a week ago by III Damnation Productions, so stream it next, as Islander would say.

Here are some Links:

4 Responses to ““MOERAE”: A SPLIT BY AWE, VACANTFIELD, AND END”