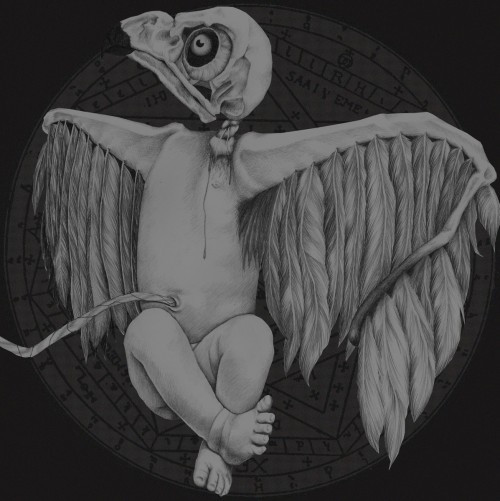 “Desolation” actually had its premiere on CVLT Nation in February, but I missed it then. Katechon uploaded it to YouTube last week, and that caught Vonlughlio’s attention, and then mine. And then further exploring led to the discovery that the band had previously revealed two more songs from Coronation in addition to “Desolation”, and that all three are available for listening on Bandcamp.

Prepare yourself for otherworldly blackened death metal. It’s vicious, voracious, violent, and visionary — a seething, boiling mass of skin-stripping riffs, bullet-spitting percussion, soloing that erupts like an acetylene torch, and utterly tortured vocals. There are strange, unexpected touches here and there as well (e.g., the bleak, alien mid-section of “Humanity Diseased”), and the music includes thoroughly engrossing bass work, in addition to other wonders. 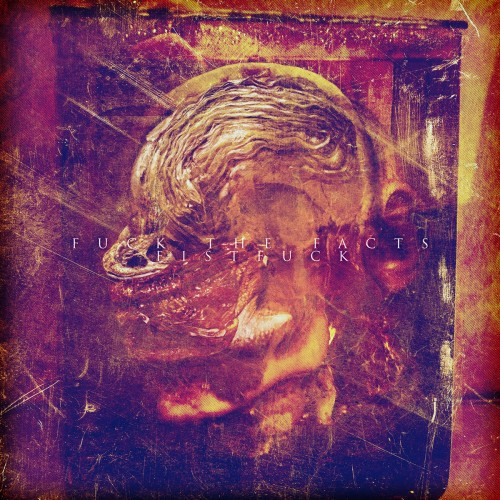 FUCK THE FACTS AND FISTFUCK

“Skid Etiquette” is destructive, dynamic, and even mesmerizing — which is an impressive accomplishment in a song that doesn’t even reach the two-minute mark. But it’s Fuck the Facts, and we’ve come to expect such things from this band.

“Posigrind” is a full-bore assault, loaded with electrifying riff murder, buzzing like a demon hornet swarm, punching like a nail-gun.

The split can be pre-ordered now on CD, 10″ vinyl, or digitally — via these links:

Wiegedood is a Belgian band formed last year among members of various metal and hardcore bands such as Amenra, Hessian, Oathbreaker, and Rise And Fall. On a whim, I plucked their forthcoming debut album De Doden Hebben Het Goed from our mountain of un-heard promos yesterday and spun the first song, just to get a taste of it. It turned out that the first song is one of only four on the album and it’s 13 minutes long — so, more like a large appetizer than a mere taste. And I never made it past the first song, because I listened to all 13 minutes of it three times in a row. Further exploration revealed that the song was premiered by CVLT Nation, and so you can listen to it below.

The song’s name is “Svanesang”. It begins with cyclonic force and fury — a black and harrowing storm front driven by needling lead riffs, both deep and high, that are electrifying and memorable. In sharp contrast to the unbridled intensity of that long, opening onslaught is the section of the song that comes about six minutes in — consisting of nothing more than isolated, widely spaced, reverberating guitar and bass notes eventually joined by strummed chords. There’s a morose yet wistful quality to this slow interlude — which makes the impact of the song’s furious aftermath even more galvanizing. And at the end, the band unite these contrasting segments into a finish that’s both entrancing and ravaging.

Eventually, I will have to listen to the rest of this album. If it’s anything like the quality of “Svanesang”, the album will be one of this year’s most surprising highlights.

De Doden Hebben Het Goed” will be released on May 8th on LP, CD, and digital download and pre-orders are now available via Consouling Sounds at this location.

The final installment in this round-up comes to us from NCS contributor Grant Skelton, who provided the following introduction to the music:

With the release of Gruesome’s LP looming on the horizon, I found myself in need of an additional serving of good ol’ Florida death metal. I first discovered Solstice (not to be confused with the UK doom band of the same name) last year during a trial run on Spotify. Their first two albums, a self-titled debut (originally titled The Sentencing) and a second called Pray were remixed and remastered in 2012. That remaster was released under the title Pray For The Sentencing. This is a great example of modern technology working in a band’s favor. While I didn’t get to hear this band in the late 80’s/early 90’s death metal peak, to enjoy their music late is much better than never hearing it at all. 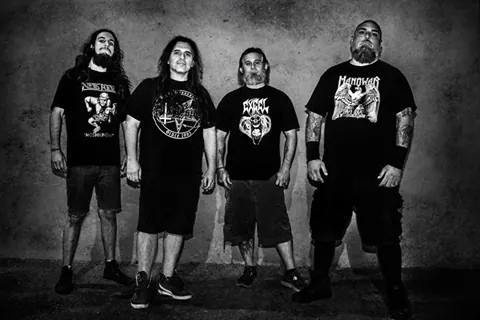 Solstice, along with Brutality (who are also working on a new album), are unsung heroes of the Florida scene. I never see these names mentioned in angry diatribes among metal intelligentsia. But their releases can finally get the attention they deserve, albeit delayed, in the digital age. Websites like Bandcamp have virtually eliminated any distance between the consumer and the producer. 2015 is a good year to be a metal fan when old releases are being unearthed for us and made readily available on mobile devices.

Below is a YouTube stream of a new Solstice song called “Eyes Sewn Shut.” The song will presumably be featured on a new album. It will be Solstice’s first new material since 2009’s To Dust. Fans of the band’s old material should warm right up to this song without any problems. Expect severe, rigorous riffs that rend limbs like a chainsaw. The bass is loud enough to rattle one’s bones. Original drummer Alex Marquez is just as sharp and precise as he was on the band’s older works. This song should have you circular headbanging enough to turn you into Regan MacNeil. Perfect for the impending swath of humidity that will no doubt descend upon us this summer.

Now, if only someone could convince Derek Sykes to breathe life into Demolition Hammer…

Stream the Pray For The Sentencing remaster here on Bandcamp ($15):