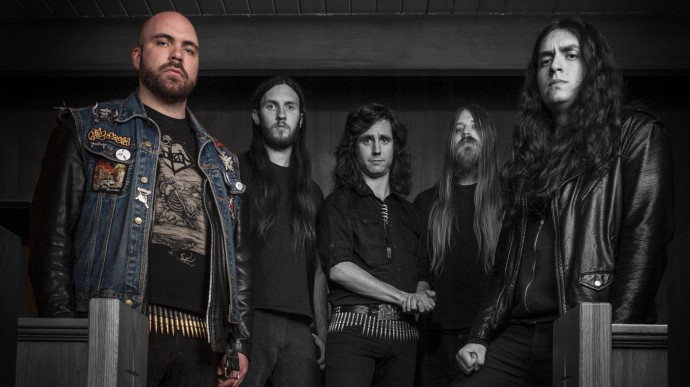 (Our Kansas-based friend Derek Neibarger is not only the man behind the Godless Angel death metal project and the inventor of the Cat Hand Rest©, he also proved himself to be an energetic and successful interviewer during his recent day-long takeover of Metal Sucks [all the interviews are linked here]. In fact, he was so energetic in lining up interviews that a few responses arrived too late to be posted at MS — and so we get to be the lucky host of this interview of Steve Jansson of the amazing Crypt Sermon, whose debut album came out of nowhere to take the metal world by storm this year.)

In 2013 members of Infiltrator, TrenchRot, Labyrinthine, and Hivelords came together to form Crypt Sermon. The Philadelpia doom metaller’s debut album, Out of the Garden, was released February 24th.

A chance meeting with their drummer, Enrique Sagarnaga, led to the opportunity to ask guitarist Steve Jansson a few questions about the new album and the band’s future plans.

Derek: Hi! Thank you for granting me an interview! In February of this year you released your debut album, Out of the Garden, on Dark Descent Records. Are you happy with how it turned out? How has the response been to the album?

Steve: We are definitely really pleased with how the record came out. Of course when I listen back, there are things that I wish I had spent more time on and done a little better on my end, but that’s the name of the game. As far as the response, it’s been extremely positive and we are certainly stunned at how much attention the album has been getting.

Derek: Can you tell me a little about how the band came together and how you came to be signed to Dark Descent?

Steve: Brooks and I both play in a death metal band called Trenchrot which is on Unspeakable Axe Records, one of two sub-labels of Dark Descent. After we finished recording the Crypt Sermon demo, we sent it to Eric at UA just to show him our new band and what we were up to. He then urged us to send the demo to Matt at Dark Descent, so we did just that. Matt offered to put it out immediately and here we are.

Derek: What is the metal scene like in Philadelphia? Is there a lot of support for the doom genre?

Steve: I would say that Philadelphia has a pretty healthy metal scene. There are definitely doomy bands but it’s a bit more sludge oriented, and people are definitely into that. We are kind of the oddball band of the bunch as there isn’t really anyone in the area doing this style.

Derek: What are your touring plans? Will you be going outside of the US to promote the new album?

Steve: Our singer just had a baby, so even smaller tours are kind of on the backburner at the moment. That said, we will definitely pick up and get on the road when the time comes. As far as travelling abroad, we have had some offers that we are still considering and trying to figure out. It’s definitely going to happen in the near future.

Steve: Count Chocula! Typical, huh? It’s definitely a nostalgia thing because I can’t even remember the last time I had a bowl, but that’s the first thing that came to mind. Now I’m craving it.

Shirts? That’s tough! I’m pretty fond of this yellow Coroner shirt that I have because it makes me feel as though I have really broadened my horizons from the usual black. Because I have so many, I typically go through phases and will wear a few a lot before digging in the closet and discovering a few that I totally forgot that I had. The Nifelheim shirt that I got up in NYC at Defenders of the Old is definitely in heavy rotation right now along with my Riot “Fire Down Under” baseball shirt, and of course one of like 10 Iron Maiden shirts I own. I couldn’t just pick one because I like them all!

You know, I grew up with dogs and I love them to bits, but I have to say that I’ve really grown to become a cat person over the last few years. Cats don’t need the constant attention that dogs do and are much more low-maintenance. Then again, one of my cats is more like a dog and he’s the sweetest pain in the ass anyone could ask for.

Derek: Thank you for taking the time to answer my questions! Good luck with your debut album and I hope to be hearing much more from Crypt Sermon in the years to come!

Check out “Heavy Riders” from Out of the Garden:

7 Responses to “AN INTERVIEW WITH STEVE JANSSON OF CRYPT SERMON”