Grindcore isn’t a metal genre typically associated with complex songwriting or accomplished musicianship. Which is usually fine, as that’s not the essence of the style or the reason why fans of grind listen to it. But every once in awhile a grind band like Oblivionized comes along with the drive and ambition to develop a sound that consists of more than straightforward 30-second beatdowns and endless power chords.

This London-based trio have generated numerous smaller demo, EP, and split releases over the years and have only now released their first full-length, Life Is a Struggle, Give Up. The wait for an album-length statement from the group was definitely worth it, though, as the band had already spent several years tinkering around and playing a lot of different sounding material, which they have distilled into a mature, cohesive, and eclectic sound here on Life Is a Struggle, Give Up. 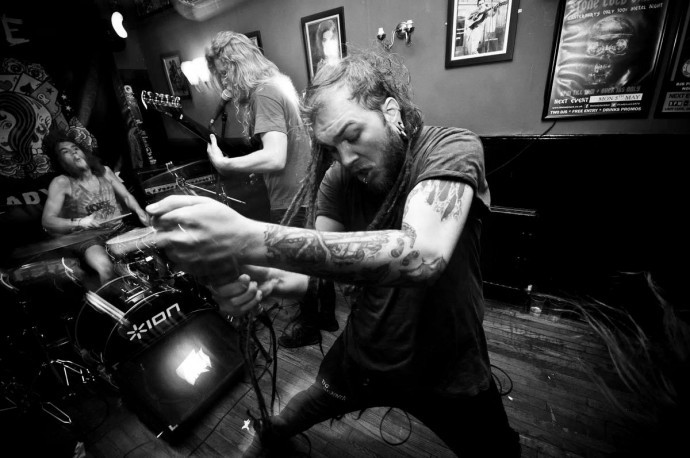 A strong technical and rhythmically insane Dillinger Escape Plan influence is noticeable throughout the record, yet there’s so much more going on here that to describe it as mere “math grind” would fail to encompass everything else the record consists of. The band frequently delve into rabid deathgrind passages that would make Discordance Axis, Pig Destroyer, and Maruta proud to share their company. They also thread in plenty of shrill dissonance and lumbering drawn-out passages in a way that sometimes reminds me of Gaza. Finally, there are some full-throttle, near technical-death-metal moments tossed into this infernal meat-grinding machine of an album as well.

As if it weren’t enough that the band have created a dense, hybridized sound, it’s their chaotic and swiftly stitched-together songwriting that really makes Life Is a Struggle, Give Up one of the most batshit insane and incredible grind records I’ve ever heard. When I listen to this record, I’m frequently reminded of a level of chaos and hatred that could be compared only to Ion Dissonance’s debut masterpiece, Breathing Is Irrelevant. And in my book, that’s a high compliment.

Life Is a Struggle, Give Up is an astonishingly bleak musical reflection of not only the sickness in the world around us, but also the self-defeat and weakness within us all. Oblivionized have crafted a jaw-dropping debut, the kind you’ll constantly find yourself sucked back into frequently in order to endure the manic intensity and unnerving darkness that Life Is A Struggle, Give Up throws at you mercilessly. If you only buy one grind record this year, buy this one.

Life Is A Struggle, Give Up is out now through Secret Law Records and can be ordered in both CD/LP format here:

If you want to check it out on Spotify:

One Response to “OBLIVIONIZED: “LIFE IS A STRUGGLE, GIVE UP””