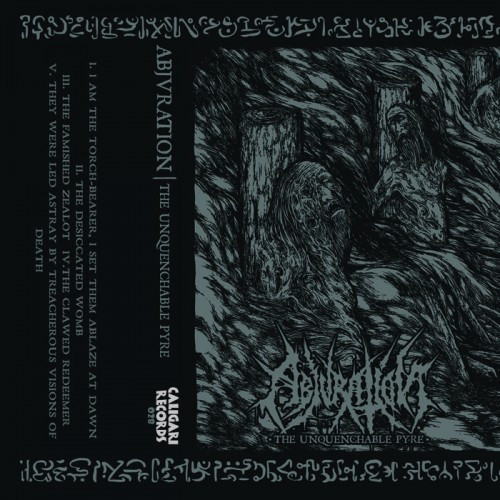 KevinP sort of stole my thunder yesterday on our site when he named Abjvration’s debut one of the Top 5 releases of April. But I’ll go him one better: The Unquenchable Pyre is one of the best releases I’ve heard all year.

The EP comes our way from Caligari Records. Originally, it was to be released exclusively on tape, but yesterday the label decided to begin making some of its offerings — including this one — available for digital download on Bandcamp. In the format in which I’ve listened to the EP, and as you can hear it on Bandcamp, the five tracks are in a single audio file. With just a couple of exceptions, it’s not entirely clear when one song ends and the next one begins; they flow from one to another, for the most part without discernible breaks. And they work supremely well that way. It’s like a single concerto of horror and pain. 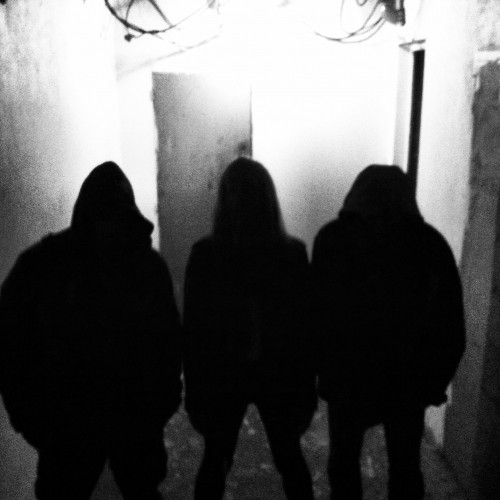 According to Caligari, the members of Abjvration include former members of the French stoner/doom band Huata and the French funeral doom band Funeralium, and the music on The Unquenchable Pyre incorporates those styles of metal, along with death metal, into an unusual and disturbing concoction.

The songs include enormous, thick, distorted riffs that wouldn’t be out of place on a stoner/doom album. They’re built on powerful, doom-saturated melodic hooks that sink their teeth into your neck through repetition, usually at a lumbering pace that enhances their skull-cleaving force. But at times, the generally mid-paced music sinks into the kind of ghastly, massively heavy crawl that claims kinship to the most blood-congealing forms of funeral doom.

On the other hand, there are moments in the EP when the band explodes in a torrent of blackened death metal, with the rancid buzz of tremolo chords and the assault of hammering drums wrecking havoc in fine, merciless fashion. And at other times they employ jabbing, chugging riffs in onslaughts of ancient death metal malevolence.

This interaction of glacially slow, cataclysmic pounding, sludgy mid-paced riff worship, and eviscerating eruptions of violence makes for a highly dynamic and thoroughly engrossing experience. It’s also an experience that’s morbid to the core, with an overarching atmosphere that’s tortured and frequently terrifying.

The horrifying nature of the music is enhanced by the judicious use of shrieking feedback, disturbing vocal samples, and truly monstrous roars and agonizing howls by the band’s vocalist. The grim, doom-drenched aura of the music is further underscored by the distortion applied to the guitars (there’s no bass!) and by an almost muffled quality in the drum tone — when the double-bass kicks come in, it sounds authentically like the rumble of distant thunder.

Ultimately, what makes The Unquenchable Pyre such a stand-out release is Abjvration’s ability to create music that’s both nightmarish and infectious, both riff-driven and atmospheric.

There is also a hint that the EP may be a kind of concept album. In addition to the name of the EP and the song titles, and the fact that the songs themselves flow from one to another to form what sounds like one continuous piece of music with varying movements, the EP ends with a vocal sample that seems to come from the 1999 TV mini-series Joan of Arc — a passage in which Bishop Cauchon asks Joan, “What have you done!? What have you done?”, and she replies:

“What I confessed, I confessed from fear… but every word was a lie. I retract my abjuration now and for all time.”

To download The Unquenchable Pyre, use the first link below. To order the EP on tape, go here. The continuous stream of all of the EP’s songs is included after these links.

17 Responses to “ABJVRATION: “THE UNQUENCHABLE PYRE””