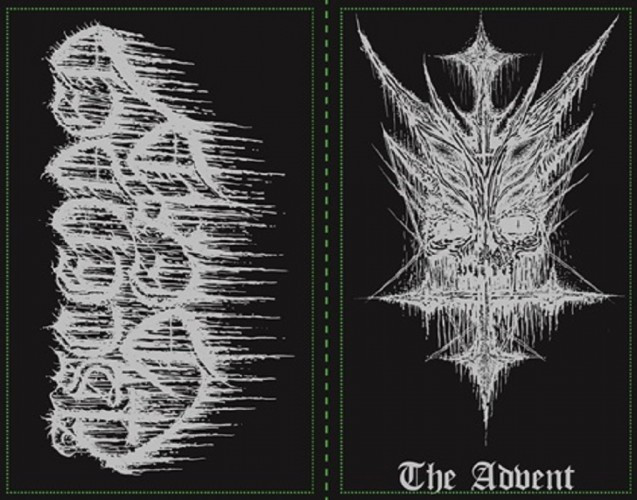 Imagine you’re behind the wheel of a steroid-fueled muscle car going too fast through a hairpin curve on a mountain highway — and your brakes suffer catastrophic failure. You blast through the guard rail, briefly experience the thrill of flight, and then proceed to barrel down the mountain listening to your ride violently shake itself apart, bolt by bolt, while some inhuman horror in the back seat roars at you to stop fucking with the brakes and give it more gas.

You got that vision in your head?  Okay, good.  That’s kind of like what Ascended Dead’s new EP sounds like. If you don’t find the metaphor helpful, just picture your own brain: same thing will happen to it. 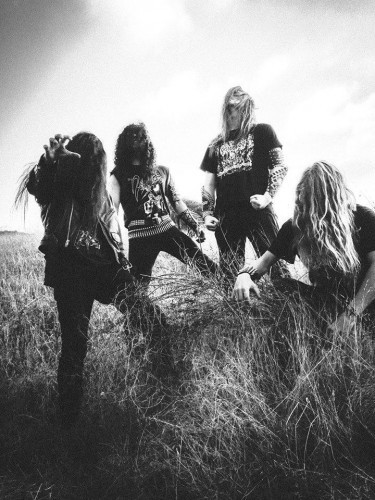 The Advent collects six songs that were originally recorded by this San Diego band in two sessions for splits, and it’s now being released digitally and on tape by the Swedish label Blood Harvest. It follows a four-song collection from last year (reviewed here) entitled Arcane Malevolence.

I had a different metaphor for that one: “The music moves so quickly and is so utterly decimating in its philosophy that even after only four songs you may feel like you’ve spent a week in a war zone.” In a later NCS post (here) Leperkahn called it “vicious as a starving hyena”. So you see, there’s something about this band’s music that causes us to spew metaphors.

The first four songs on The Advent were recorded right here in Seattle last July at the end of a tour, and the last two seem to be pre-production versions of tracks that were included on the Arcane Malevolence EP. So we’ve got both a taste of what’s to come from the band and some things that show you where they came from.

All the songs proceed at the pace of cheetahs — if cheetahs were being chased by something even faster. The music is filled with the discombobulating clatter of completely off-the-hook drumming and a storm of blazing, distorted guitars. Every now and then there’s a shrieking guitar solo that sounds like it was recorded during an electrocution or a grand mal seizure.

The sheer speed and technical capability of the music is borderline breathtaking, and it has an almost improvisational quality — which I guess is another way of saying that it sounds like chaos. There are discernible riffs and grooves scattered here and there (more so on the two older songs), but in the main, this is just sheer, vicious sonic insanity, recorded in a way that makes it sound rough, raw, and ravenous. And yes, there is a monster behind the mic, who roars, barks, and spews vomit.

If anything, the newer songs are even faster and more unhinged, as if the band decided to quit fucking with the brakes and give it more gas. Fine by me. I have no doubt The Advent will cause some listeners to run screaming into the streets, but I found it to be an electrifying thrill ride. I’ll happily have more of what Ascended Dead are doing.

The EP is available for digital download right now, and it can be pre-ordered on tape (shipping is projected around May 11) — and you can do both at the Blood Harvest Bandcamp page. Here’s a crapload of links (including that page), and then a full stream of The Advent: