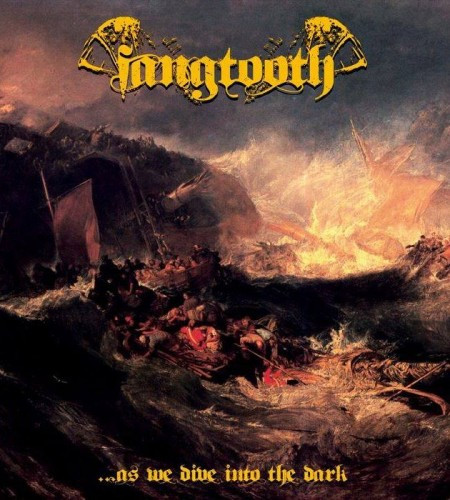 (Comrade Aleks brings us this interview with Sfack, vocalist/guitarist of the Italian doom band Fangtooth.)

It’s time to heed the call of the restless sea and dive into the dark, hungry depths under hypnotic songs of heavy waves and howling winds. The Italian doom band Fangtooth have returned to their listeners with a second full-length record after three years of praying to Neptune and other ancient deities of sea.

The band’s mates are true to the traditions of their land, and therefore they somehow avoid Lovecraft-inspired lyrics, but how long can they resist the voice of madness? How long can they hold the path of traditional doom metal? Fangtooth navigator Sfack is ready to clarify this. 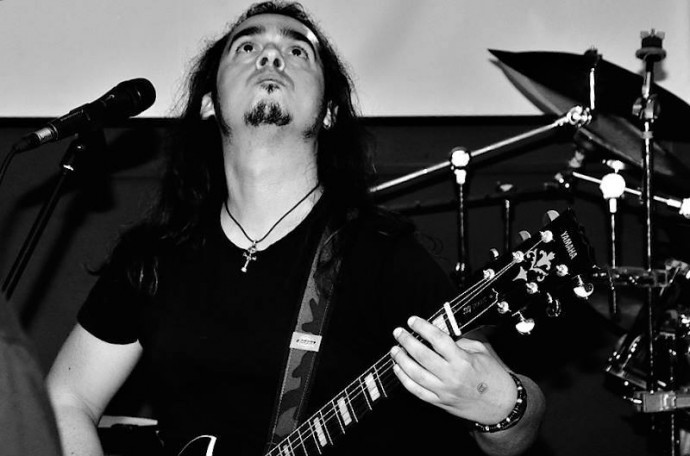 Hello Sfack! What’s the current state of Fangtooth? What are you doing now after the release of …As We Dive Into The Dark?

Hello! Thank you for this interview! We are promoting our new album with some gigs, but first of all we are working hard on our third effort, which we hope will be out in 2016.

Really?! So soon… Where did you find the inspiration for a third release?

Yes, it seems too soon, but we are very slow (surprise!) when we record our albums and in the meantime we compose new songs. You also have to take into account that we finished the recording of …As We Dive Into the Dark in the summer of 2013, two years ago, so now we have something like 12 to 13 songs ready!

Regarding the inspiration, as always we have been influenced by our inner feelings and the world that surrounds us, and as always we used literature and historical or mythical themes as metaphors.

Do you already have some definite ideas about how the new songs will sound? 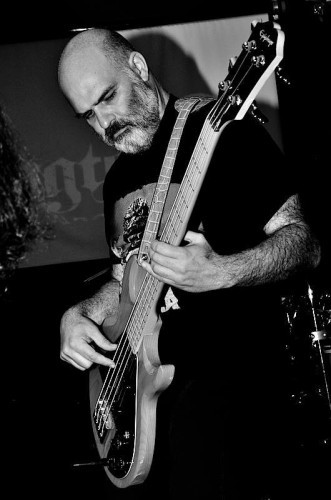 You changed labels from Russia’s Solitude Productions to the Italian Jolly Roger Records. I don’t expect any dramatic story besides that, but what is the difference in working with these labels?

No dramas, really! Jolly Roger showed its interest in our new album and, given that with Solitude we had signed a contract for only one album, we decided to sign with the Italian label because we have great respect for the work Antonio Keller (Jolly Roger’s mastermind) does to support past and present Italian metal bands!

Sfack, Fangtooth also appeared on the Doom Over The Crypt compilation. Who is the author of this compilation?

Doom Over the Crypt has been an idea of two great doomsters and supporters of the Italian doom metal scene: Simone Pozzolo of the site Italian Doom Metal and Alessio Sarais of the channel Doom From Italy. You can find them on Facebook: 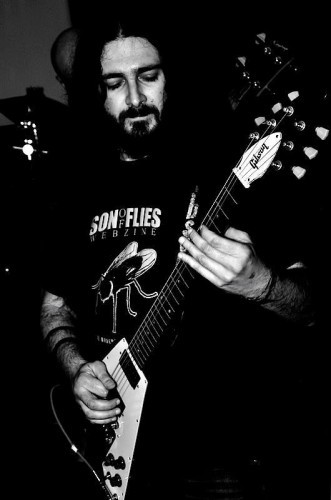 What have you done to promote …As We Dive Into The Dark? Do you think that bands must put some effort into such things as it was 20-30 years ago?

We don’t really do much to support the album simply because we can’t. We all have work and a family and so we don’t have much time. We played some gigs, but the rest of the promotion is in Jolly Rogers’ hands.

Mate, I would like to clarify: Was the band really named after a deep sea fish?

Sure, we are named after that little cute fish. We love the sea, the abyss, and the strange creatures, mythical or real, that inhabit it. The fangtooth is very little, 10 cm in length, but it has giant fangs in proportion to its size. We think of us like fangtooths, we are tiny but we bite!

Three years have passed between your first and second albums. How long did it take to form an idea of how it must sound?

When the first album came out, the songs for the second were for the most part ready, but those years have been really hard for us because I lived 800 km away from our city! We always have the same idea about how an album must sound: heavy as fuck!

What are the main elements of Fangtooth’s sound?

Fangtooth “The Eye of God”

The artwork for your debut album Fangtooth and your second full-length …As We Dive Into The Dark, as well as some of the songs’ lyrics, have one general leitmotiv — the sea. What has pushed you again and again to this theme?

We live in Messina, one of the most important harbors of the Mediterranean from Greek times to the 20th century. The sea is part of our culture, of our life, is part of us just like the sun or the air we breathe.

Messina is located on the Sicilian coastline, and I’ve read that this part of Italy suffers from economic crisis more than others, as the island is also the closest civilized center for fugitives from Northern Africa. Is this truth?

Yes you’re right, but this is a problem that predates the international economic crisis. The southern part of Italy has always been poorer than the northern part, in fact many “southerners” go to work in the northern cities. This is very sad, because in past times Italy, from Rome onward, was considered one of the richest countries in the Mediterranean.

Speaking about the fugitives from North Africa, the situation is dramatic — just two days ago 800 people died in the sea. Europe must do something to stop this tragedy, but I fear that there are interests that we all don’t know… 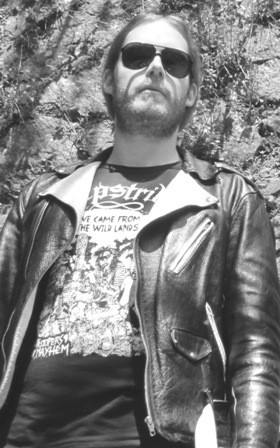 Do you consider Fangtooth a “Nautical Doom Band” like Germany’s Ahab?

No, because Ahab’s music creates an atmosphere, just like the music comes from the abyss, and the sea is the main theme of their songs. We have some songs that speak about the sea but our lyrics are more varied.

Here’s the first standard question: Could you tell a story about one particular song from the new album?

Every song tells a story, but my favorite is “Lord of a Kingdom Dead”. This song speaks about a man who sacrifices everything to reach power. At the end of his life he sits on his throne, in a silent room, king of all but king of nothing. Everyone he loved is dead, he can hear their voices but they are only echoes from the past.

It is a metaphor of our life: We always struggle to gain more money, to obtain more power, we are a society of workaholics and social climbers.  We forget that our life and the life of those we love are not eternal, and that we can never make a step back in time. Every moment we have to be happy with the ones we love is a unique occasion, and if we waste it, it’s gone forever.

And the second standard question: What was your favorite book when you went to school?

More than one please! Everything written by H.P. Lovecraft, R.E. Howard, E.A. Poe, black magic books (like the Solomon’s Key or the Book of 500), and above all the beautiful “Carmilla” by J. S. Le Fanu. You understand that I don’t give a fuck about authors who have less than two names, ahahahah!!!! 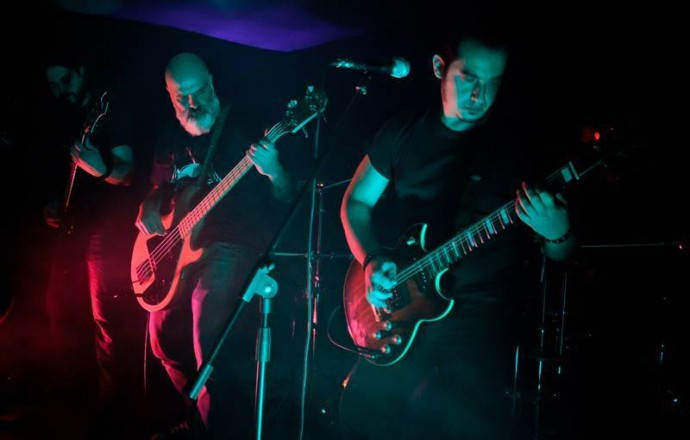 Oh… Ha-ha, indeed. I had one question about Lovecraft for you as well – because I have also interviewed your colleagues Bretus who have a new record about the town of Innsmouth and because Lovecraft had enough stories connected with the sea! Do you plan to record a song based on his books?

Our friends Bretus come from Calabria, a region close to Siciliy, and they really kick asses! We have a song from the upcoming album which probably will be based on the Cthulhu Myths, but I still don’t know how much it will be a direct connection or just a suggestion.

I interviewed one band from Northern Italy about a month ago, and they suppose that an Italian doom scene doesn’t exist because there’s a lack of collaboration, there’s no proper connection between bands, listeners, and labels. Do you agree with that?

I think it is true, but the problem is not only the lack of collaboration or connection, but the difficulty in organizing something that puts us all together. We come from the south of Italy, and for us it is nearly impossible to play outside Sicily or Calabria because it is too expensive. We played with more Italian doom bands in Malta (during the mighty Malta Doom Metal Festival) than in Italy!!! This is really sad, because Italy is full of great bands like Firebird, Bretus, Krownn, L’Impero delle ombre, In Aevum Agere, Crimson Dawn, and many others, too many to list!

Okay, Sfack, it was great to talk with you about Fangtooth, but that was my last question for today! So I wish you and the other shipmates of Fangtooth all the best and may Neptune and other sea deities help you on your way.

Thank you brother — Neptune’s statue stands high near the harbor of our city and protects us from the wrath of the sea! I want to say only one thing: Doom on and support the underground!!!