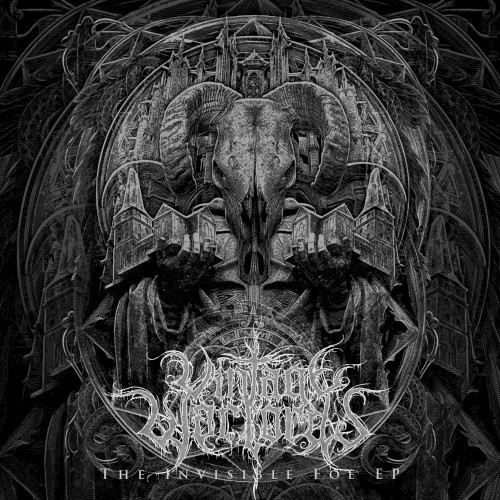 We have the pleasure of premiering for you a full stream of the debut EP by Vintage Warlords in advance of its May 19 release by Redefining Darkness Records.

Vintage Warlords are a duo consisting of guitarist/bassist/drummer Thomas Haywood (aka Plaguehammer), who has spent time with the likes of Abigail Williams and System Divide, and vocalist Conor Byers. Together they have recorded three tracks of massively heavy, void-faring death metal that deserve your undivided attention.

The music exudes a thick pall of doom and desolation, conjuring nightmare vistas of blasted landscapes cloaked in perpetual night and inhabited by monsters. Whether trudging in a diseased crawl or pounding like sledgehammers, the riffs are massive, as are the thunderous drum strikes, and the dissonant melodies are thoroughly morbid. There are passages in the songs that are slow and groaning, like the exhalation of decay or the manifestation of some post-apocalyptic hallucination — and there are also passages that drive so hard and are so rhythmically compulsive that you can’t not headbang.

There’s also some really striking lead guitar work, particularly in the title track (which features a guest guitar performance by Michael Wilson), and the vocals are authentically horrifying.

As ominous and frequently vicious as the music is, the songs are gripping and memorable, both atmospheric and hard-hitting. In a nutshell, this is a really auspicious debut from a band that’s going to bear watching closely in the future.

The Invisible Foe can be pre-ordered now through the Redefining Darkness Bandcamp page (here) or the Vintage Warlords Bandcamp (here). The awesome cover art was created by Remy Cuveillier at HeadsplitDesign (logo by Christophe Szpajdel).

2 Responses to “AN NCS PREMIERE: VINTAGE WARLORDS — “THE INVISIBLE FOE””