It has taken me longer to write this review than I had planned, despite the fact that I couldn’t wait to get my hands on the album. Apart from the quality of False’s untitled EP in 2011 and their split with Barghest in 2012, their live performance last summer at the Gilead Fest in Wisconsin (which included some of the material from this album) left me stunned and almost breathless. Yet in retrospect, the very qualities that made that performance by this Minneapolis black metal band so gobsmacking were the ones that delayed this review:

The album is so unremittingly intense, so overwhelmingly powerful, so emotionally draining, that it has taken time to absorb it — and I’ve had to leave more than the usual amount of time between listens, just to clear my head and recover from each listening experience.

Searing intensity is the signal feature of False’s full-length debut (also untitled). And because it includes an hour’s worth of music spread over only five long tracks, that’s a lot of intensity. Much of the time, the music is warlike and tumultuous, the kind of senses-filling cyclone of sound that repeatedly conjures images of nature in the throes of a vicious deluge. Listening is like being cast into a storm-tossed craft on a heaving sea — with a battle between gods raging in the black skies overhead. 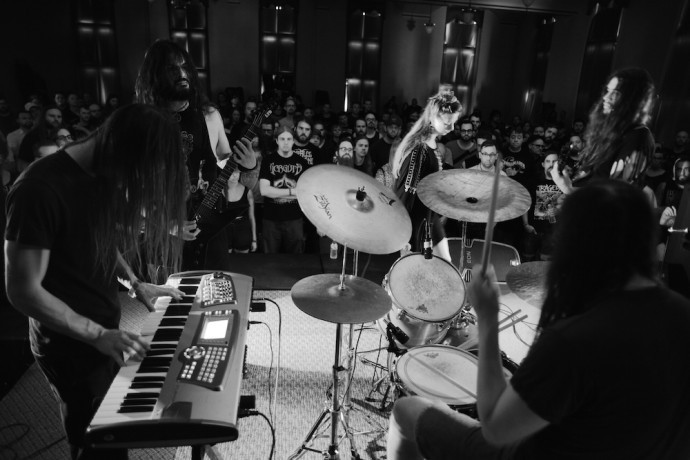 That reference to a war between gods isn’t an offhand remark. It’s intended to capture another vital ingredient in this album: Apart from frequently being overpowering in its ferocity, it’s also tremendously dramatic, with grim, surging guitar melodies and deep, sweeping keyboard undertones that often carry the atmosphere of the music into epic territory.

There’s a kind of terrible majesty in these moments, perhaps most pronounced in the album’s middle song (also untitled), which is reminiscent of certain strands of dark, Northern European pagan metal. And although the keyboards are used subtly, in a way that adds texture, enhancing the low-end power of the sound rather than dominating the music, they do contribute to the almost symphonic force and savage grandeur that emerges to varying degrees within every track.

As for the guitars, for the most part they generate raging walls of distorted sound. Sometimes the riffs turn into a kind of frenzied, dissonant writhing, like a nest of serpents suddenly menaced by fire. At other times, they shift gears into a jabbing rhythm, like a freight train moving at full throttle. And speaking of full throttle, the drumming on the album is almost always supercharged — blazing fast even at times when the fury of the guitars has subsided.

The vocals are more than a match for the instrumental music in their ferocity. Rachel’s enraged growls and agonizing howls are authentically bestial. She sounds like a fight between a panther, a tiger, and a lion, with no escape by any of them until the others are dead.

You can’t write songs in the 9 – 15 minute range, which is where all the tracks on this album fall, without doing something to change up the game; otherwise, you run a serious risk of boring listeners or rendering them numb. That’s a particular risk for bands like False, whose main gear is raging intensity (rather than groups whose stock in trade is practicing sonic hypnosis or delivering audio narcotics). Without a break, listeners will experience sensory overload, more enervated than innervated. That’s a risk False avoid — though you’ll still need to brace yourself if you intend to listen to this album in a single session.

But breaks in the onslaught do come. “Saturnalia” includes an extended mid-section of slow, sombre guitar notes, reverberating bass tones, and staggering drum beats and cymbal crashes. There’s a whirring guitar melody somewhere in the distance, but this is a mournful dirge, like a gradual descent down a ladder of thorns into an abyss of doom.

The beginning of “Entropy”, which follows the completely galvanizing untitled middle song, is also slow and dismal, with an oppressive melody and an almost martial, methodical drum rhythm. The rampage slows again in the middle of the song, where the band cast the aura of a funeral procession, with a guitar and piano melody that bespeaks mourning and reflections on devastating loss. At the end of that very long song, you get something like the sound of a church organ, with long, dissonant chords, as if moaning under a vaulted ceiling with candles guttering in the chill.

Other breaks come through variations in the melody, when the huge moving waves of dark melody change, or when penetrating lead guitar arpeggios emerge through the cascading walls of sound in a way that immediately seize your attention. The best of those latter moments comes in the last two minutes of the album’s final song, “Hedgecraft” (which vies with that untitled middle track for my favorite of the five). It makes for an incredibly memorable finish to an astonishingly powerful album.

After what False accomplished with their first two releases, I had very high hopes for this album. I’m sure many others have felt the same sense of anticipation, waiting to see what the band would deliver in the years that have passed since that split with Barghest. I don’t think fans will be disappointed. The wait has been worth it. This untitled debut album by False is a work made of blood, sweat, and fire, searing in its warlike ferocity, wrenching in its raw emotional impact, and ultimately quite memorable.

Additional Notes from Gilead Media: “This Untitled album was recorded, mixed, and mastered by Adam Tucker at Signaturetone Recording. Guitars, bass, and drums were tracked live in a single room, no isolation, with vocals and synths tracked afterwards and minimal instrumental overdubs. Artwork by Nicole Sara Simpkins. This album will be presented as a gatefold CD and gatefold 2LP, each pressed in a quantity of 1000. It will be available in stores on June 16, 2015, with direct pre-orders available Thursday, April 9th.”

The album can be pre-ordered on CD or vinyl via the Eroding Winds online store or digitally through Bandcamp: