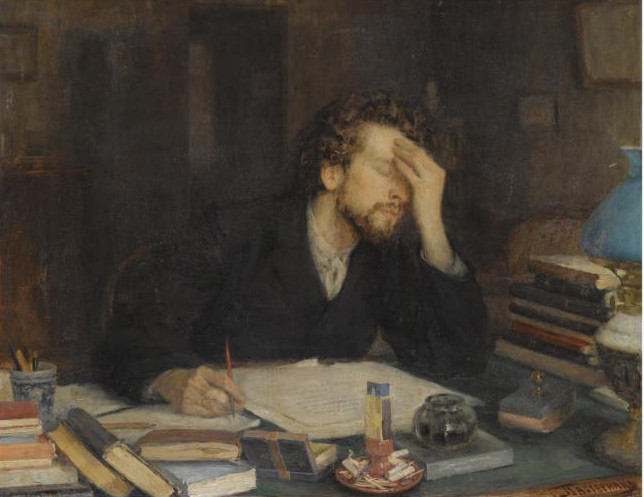 (We welcome back guest writer Grant Skelton with these thoughts on… exactly what the title of the post says.)

I received a recent email whose contents I’ve been mulling over for the last several days. The email came from a metal musician but, as is often the case with me, we ventured onto a rabbit trail of a conversation. It turned out that the musician and I shared a similar interest in H.P. Lovecraft. That fact alone is not surprising, because Lovecraft’s fiction has provided metal bands with lyrical fodder for decades. (Side note: If you happen not to be familiar with Lovecraft, Amazon has a $0.99 Kindle ebook with over 150 of his short stories. See the link at the end of this article). When I mentioned that I was a fiction writer trying to publish a first novel, the musician compared that to the process of writing, recording, and releasing an album.

The first phase, he said, was the creative phase. It is fun and rewarding, but it is also hard work. The second phase, which I anticipate can be enjoyable if you’re a business-minded person with a lot of grit in your bones, is the uphill battle of getting your product out there. Or as he put it, a “whole gauntlet of navigating the various gatekeepers and industry contacts.”

I have wanted to be a writer since I was 8. I began, like many, by writing horrendous (and I mean that in the sincerest sense) and bleak poetry bewailing the woes of adolescent angst. I eventually graduated to short stories. At 17, I conceived the bright idea to write a novel… one I didn’t actually finish until just after my 29th birthday. Had it not been for the encouragement of my wife, I would not have finished it at all. The first draft was a glorified paperweight. It was filled with a laughable amount of fluff and extraneous dialogue. It did not have even the significance of toilet paper. But that’s why there’s editing. And more… and more… and more. Nope still more. Even more… yes, still more editing. After 3 beta readers, 3 rounds of edits I did myself, and a professional editor, I had a manuscript I was actually proud of. Editing is similar to woodwork. The first draft is a blackened, gnarled, gargantuan overgrowth that needs to be whittled, abraded, hacked, and molded. And that process usually takes twice as long as the writing of the first draft. And then came the query process.

I began querying just before Christmas. In February, I received a scholarship to attend a writing conference in Austin, TX. Around that same time, I got my first request for a full manuscript from a publisher. I sent the manuscript and was told to wait 4-8 weeks for a decision. I followed up after the 8th week. I found out that my manuscript had made it all the way to the owner’s desk. Needless to say, I was on pins and needles. This past Wednesday, I received an email from the publisher. They declined to publish my novel. The rejection was polite and professional, and actually enumerated their reasons for choosing not to publish it. In a culture where it is so simple to send a formal template rejection, I appreciated the insight from the publisher.

At this point, I’m sure you’re asking, “Ok…why in the hell is this pompous ass posting this on a metal blog?” And that is a valid question. Here is why.

As a result of the novel query process, I have a greater respect for musicians, metal and otherwise. I understand what it is like to spend hours trying to hone a craft. I understand practicing something you love until you can no longer stand it. I understand sacrificing time with family and friends to do something that drives you. Something that’s like an obsession… an addiction even. Go too long without it, and you have withdrawals. Musicians write music because they must. They can’t not write music (Yes, a double negative. It makes my point clear). If they don’t make music, they aren’t right with themselves. They are off-kilter, their minds dull and unfocused. Their emotions become out of sync. Creativity is a muscle. Don’t exercise it and it will inevitably atrophy.

Websites like Bandcamp facilitate bands getting their music to fans. As a fan, I don’t have to wait on a record label to sign a band, and then a producer to record their music, mix and master it, and then release it. I can download the music directly from the band and put money in their pocket. As a writer, I could do something similar. For free, I could publish my novel this instant using Amazon’s Kindle Direct Publishing. But, honestly, after all the work I’ve put into the book, it is important for my journey as a writer to experience the query/rejection process. Because I am not a music industry insider, I do not know how this process works for bands. But I am inclined to believe that bands hear “no” a lot more than they hear “yes,” especially early in their careers.

On a brighter note, technology has allowed for new labels to do business with bands whose music is overlooked even by mainstream metal media outlets. In one sense, there has never been a better time for metal musicians to find labels that want to represent their work. Hypnotic Dirge Records’ entire digital music catalog is available for free! This is an integral part of that label’s business model. They have completely eliminated cost as an obstacle for any fan who wants to legitimately acquire music made by the label’s talent. On the literary side, there are dozens upon dozens of small publishing presses throughout the U.S. and the world. Just one of those might be insane enough to publish my work. And one is all it takes. But I might have to wade eyeball-deep in rejection letters until that day comes.

How likely is it that a metal musician will be able to pay his bills from his music alone? To make a living doing what he loves? I would assume not very likely. I don’t say that to be negative or pessimistic. I say it because of what I observe about the money (or lack thereof) that goes into the metal music industry. If you can’t make a living doing something you love, does that mean that you should not do it? Should you hang your dreams from a noose of “practicality” and simply pursue a traditional occupation with which you can buy a bigger house, a bigger car, and a bigger funeral plot? Each year gives us thousands of new bands. Based on that, it seems that metal musicians have answered that question with a resounding “no.” Brand new independent record labels continue to pioneer new ways to sign, market, promote, and distribute their artists’ music.

I usually listen to metal while I write. Some writers might disagree with me on this, but having metal in my ears actually helps me focus on what I’m writing. My mind has a tendency to wander. Metal music seems to motivate it to stay on track. It helps me narrow my thoughts down into a single idea — the current scene. Just like a musician, I write because I must. I have to. I can’t not (there goes that double negative again). If I don’t write, I’m not really me. The same goes for musicians. In a way, there is no separation between a musician and his music. Music is his essence, even his being. If he does not make it, something in him dies.

Bearing this in mind, I will continue to send query letters for my novel. In fact, I have already begun work on a sequel. Some might deem this a fool’s errand. Perhaps it is. But if musicians believed that about their music, then we would not have it. We would not have NoCleanSinging.com. Because there would be no singing at all. Clean or unclean.

Since we never like to write posts without music, here’s a song relevant to the theme of rejection:

11 Responses to “CREATIVITY, REJECTION, AND PERSEVERENCE”