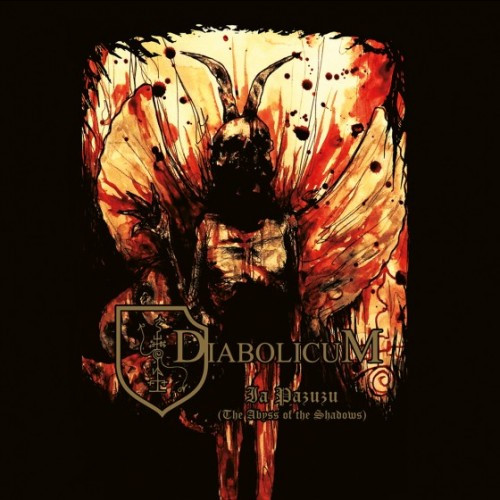 Fourteen years is a long time between albums, and that’s the span of years that has passed since Sweden’s Diabolicum released their last full-length. Now they are returning with a new work entitled Ia Pazuzu (The Abyss of the Shadows), with none other than Shining’s inimitable Niklas Kvarforth as vocalist, as well as a new lead guitarist (Likstrand) joining founding members Sasrof and Gorgorium.

It would be natural to wonder what changes 14 years have wrought in the sounds of Diabolicum, and we will now provide a glimpse into what the album holds in store as we premiere a track named “Salvation Through Vengeance“.

Diabolicum are known for their skill in integrating the savagery of Swedish black metal and the driving pulse of industrial music, and “Salvation Through Vengeance” displays that union in striking fashion, significantly augmented by Kvarforth’s crazed howls and roars (which hold nothing back) and Likstrand’s boiling guitar solo.

The song erupts like a black metal cyclone dropping without warning from storm clouds overhead. A vocal sample then provides a bridge to a more industrialized, keyboard-driven segment, which is then overtaken by that wild, transfixing guitar solo as the song ramps up again into a whirlwind of knives and blood. It’s a terrorizing adrenaline trigger that leaves us salivating for the rest of the album. While we mop up our spit, here’s some more info, followed by the song:

Ia Pazuzu (The Abyss Of The Shadows) includes guest appearances by Malfeitor Fabban (Aborym) and Vargher (Naglfar, Bewitched, Ancient Wisdom), and the cover art was created by Maxime Taccardi. The track list is as follows:

1. Baxxar Ehl Uhza
2. The Void Of Astaroth
3. The Silent Spring
4. Genocide Bliss
5. Salvation Through Vengeance
6. The Abyss Of The Shadows
7. One Mans War
8. Angelmaker
9. Ia Pazuzu

Ia Pazuzu (The Abyss Of The Shadows) will be available in special digipack CD format as well as a limited edition, double-gatefold LP and limited leather box on July 7th, 2015 via Code666. The CD is available for order now at this location.

5 Responses to “AN NCS PREMIERE: DIABOLICUM — “SALVATION THROUGH VENGEANCE””