It’s likely that this horse has been beaten to death so much that the goo on the ground is hardly recognizable as a biomass — but it remains true that a six-year gap is a long time to wait between discs. The situation is more common than people think, and some bands will make you wait far, far longer — although by a certain point it’s pretty clear that a group is on “hiatus”. Disarmonia Mundi has provided one of the few times when I’ve personally gotten to be part of the esteemed club of fans desperate for any word.

The two-piece that is the core of Disarmonia Mundi have certainly kept busy, with a whole array of projects that cover the whole spectrum of metal — production work and otherwise, including the Princess Ghibli project and The Stranded. However, even though The Stranded veered far closer to Disarmonia Mundi’s brand of melodeath than likely even its members intended, it’s still not Disarmonia Mundi proper, still not the band that gave us one of my personal favorite melodeath albums of the last decade with 2009’s ugly-artwork-bearing hook-machine that was The Isolation Game.

Cold Inferno, the group’s soon-to-be-released new album, has a lot to live up to and already marks a bit of a shift from the previous disc with a track list slimmed down to ten. Cold Inferno’s appearance may have seemed sudden but this is a disc that has been cooking for a while. Was the time worth it though? Can Disarmonia Mundi prove themselves to still be a melodeath powerhouse already halfway through another decade? Have I jokingly made light of the fact that I’ve been waiting six years for this album? 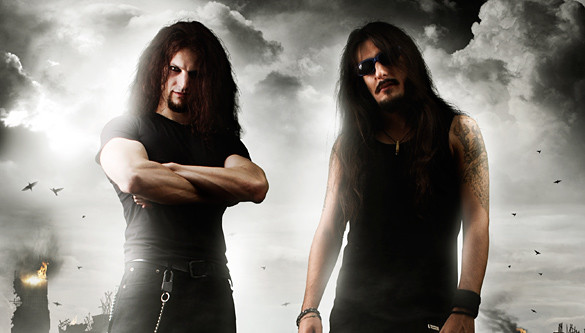 An immediate standout about Cold Inferno, other than its slimmed-down stature in comparison to previous Disarmonia Mundi discs, is that it is a goddamned fast album. The disc starts breakneck and keeps the tempo relatively high the whole way through, with a scant couple of songs dropping to something slightly slower so the band could get the pop hooks out of their systems.

One of the things I appreciated about the album’s opening track, “Creation Dirge”, is that the band don’t make it so that it’s just a heavy orchestral opening before the real first song appears on track two. Oftentimes, bands will give the opening track an awesome name, usually something apocalyptic sounding, and then you’ll listen to it thinking it’s going to be some incredible song to match the ridiculously overblown name, only to realize ,”Oh, this is just the brass section of an orchestra farting around for a minute and a half with the strings backing them up”.

Disarmonia Mundi stitch their opener to an actual song, and they keep it short — introducing the clip at which most of Cold Inferno moves, which is goddamned fast. “Creation Dirge” opens with a relentless series of blasts on the drum kit, before dropping into a super-fast one-two guitar riff as the vocals kick in.

The gentlemen in Disarmonia Mundi have made it no secret that Soilwork vocalist Björn ‘Speed’ Strid would be making a return to the mic to guest on a few songs, and I was genuinely curious how often he would appear, given that Isolation Game was largely a solo-effort with him popping up in a couple of tracks. Cold Inferno keeps it at about the same ratio, meaning that Claudio and Ettore handle a huge chunk of the vocal work again, with Speed popping up on a couple of tracks — often as a backing vocalist. However, he does get to open up “Creation Dirge” and has an awesome section in which he’s exchanging low and high vocals with the DM guys as they are backed with blasting drums and keyboard bursts — like a super-quick injection of symphonic death into the mix of an awesome melodeath track.

Despite my constant joking about Cold Inferno’s new supermodel figure, the album itself is heavily layered with guitar on top of guitar on top of guitar. There are a constant series of leads always going throughout this disc, often of the dual variety, so folks who’ve missed that lately will be at home here. It’s one of the best kept secrets about why Disarmonia Mundi work as well as they do: As they’ve created more music they’ve moved away from what folks would jokingly consider Soilwork-lite (although being the massive piece of shit shill that I am, I loved both Fragments and Mind Tricks as if they were my own children and I do claim them when tax season rolls around), becoming a full-blown, melody-and-dual-lead-heavy-guitar band.

It’s one of the advantages of being a studio group, one would guess — you can do like the DM gentlemen would, and when you have guitar lead and melody stacked on top of each other you get to say, “Hey, let’s layer another twenty of these on top of each other”.

This is one of those albums in which you can find many hidden melodies such that at one moment you may be absolutely in love with the hook of a song only to find yourself grooving hard to the rhythm later. I’d hazard to use the word “dense”, because Disarmonia Mundi really did pack this album to the brim this time. “Oddities From The Ravishing Chasm”, for instance, clocks in at a whopping seven minutes and twenty seconds — which is funeral-doom length for a melo-death song — and the song itself is one of those that darts around in multiple directions, with an opening that wouldn’t be too out of place on a Scar Symmetry album. You won’t even think about the song being as long as it is because the opening section of the track charts insanely high on the headbanging scale.

“Blessing From Below” sees the band channeling the specter of At The Gates with a guitar riff that sounds like the unholy lovechild of At War With Reality and “Heroes And Tombs” off that band’s most recent disc. The song itself is probably the closest Disarmonia Mundi have ever gotten to the trademark Gothenburg style, as before they’ve always been relatively heavy on the keyboards and guitar leads, something that really didn’t get huge until In Flames, Dark Tranquillity, and their ilk were starting to blow up in the late ’90s.

It is also one of the hardest-rocking songs on the disc, with a vicious vocal performance that takes the best of what the guys have to offer and just has them roaring across four minutes. I am a massive fan of Claudio’s high shrieks, so the fact that Cold Inferno is jammed with them makes the album score high marks here. Of course, we would be remiss if we didn’t mention that, this being a Disarmonia Mundi album, the guys are still the master of the power-chorus, meaning that after repeated listens I have had about half this album stuck in my head for hours on end.

One of the first songs the band put out for Cold Inferno, “Stormghost”, is goddamned insidious on this front — alongside the made-to-be-an-earworm song “Coffin”. “Coffin” is one of the mid-tempo tracks I hinted at, and the guys are in their comfort zone with their feet kicked up, with a chorus so strong the band are going to need fans blowing their hair in the air for added “glory” if they ever play live and have this song as part of the set.

Look, I know I’ve made a joking light of how long this disc took to come out, but Disarmonia Mundi are one of those bands that I consider hugely underrated and one that seem to be infinitely capable of bringing life to an often-stale genre. Cold Inferno is another fantastic addition to the band’s repetoire and another reminder that, goddamn, wouldn’t it be amazing to see these guys take the stage? Being a studio project affords them a ton of time to work on their music, but man, do they know how to write a good pit riff when the song calls for it.

It’s another master class in dual lead guitar playing and melody — pretty much every song on Cold Inferno goes by in the blink of an eye, even the massively dense “Oddities”, and each song is armed with a weapons-grade part or two that will for sure get stuck in your head. And to repeat, the fact that Cold Inferno seems to have its tempo set to extremely fast is awesome — I absolutely love my melodeath when the bands lean on the “go fast button”, and this time around Disarmonia Mundi are pulling no punches.

It’s funny given that the two melodeath albums I’ve reviewed so far this year have both had blue as the predominant color in the cover art and have both had some sleek-as-a-battlecat guitar playing on them. Cold Inferno doesn’t have as much as Isolation Game did, but it feels just as packed with rocking riffs and headbanging sections catered to leave you with whiplash by the end of it. I just have to keep my fingers crossed that the guys don’t wait as long again to leave me with it when they decide to do a follow-up.

Cold Inferno will be released on June 9, 2015 via Coroner Records and can be pre-ordered from the label (here) or on iTunes or Amazon.