I’m awash in new music, with not enough time to cover everything I want to throw your way. Consequently, and as is usually the case, I’m making this selection on a random basis: These are the last two selections of music I heard in my scurrying through the interhole that I really liked. The first two bands I’ve featured before; the third one is a new discovery.

About three weeks ago we premiered a song from Demiurgon’s debut album Above the Unworthy, which was mixed and mastered at 16th Cellar Studios by the masterful Stefano Morabito and  features cover art by the masterful Pär Oloffson. Yesterday it was officially released by Ungodly Ruins Production and the entire album is now available for listening and download on Bandcamp, where it can also be ordered on CD. If you’re a fan of well-executed death metal, you really owe yourself to check it out. 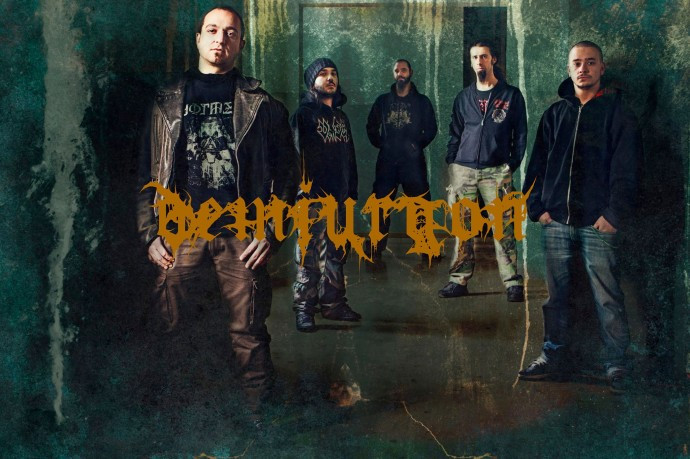 Demiurgon are from Italy, which is beginning to mean a virtual guarantee of high-speed, thoroughly morbid and venomous death metal quality. I’ve only given the album a once-through so far, but it’s loaded with riffs that swarm like wasps and writhe like a viper nest, propelled by off-the-hook drumming and a grinding bass line, and voiced by a lycanthropic madman. The music is mercilessly brutal, eye-wateringly technical, and packed with grooves that hit like a heavyweight. On top of that, the songs include searing melodic guitar solos that come in like an extra hit of adrenaline just when you think you’ve already gotten an overdose. Speaking of melodies, the songs are laced with musical motifs that are malevolent and stinking of plague.

Not surprisingly, the album is produced in a way that generates a powerful, vibrant impact that’s knife-edged in its clarity. It allows all the hyper-accelerated performance skills to shine like burnished steel.

Let me repeat — this is really well-written, well-executed death metal that’s an electrifying listen. So listen! (But be warned: you really won’t get much of a breather until you reach the closing acoustic instrumental, which is over before you know it.) 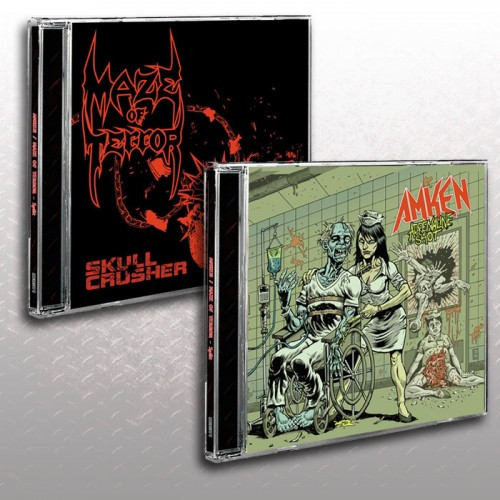 MAZE OF TERROR AND AMKEN

Seems like I’be been writing about Peru’s Maze of Terror every other month since discovering them last September. But what can I say? They keep giving me good reasons to write about them.

The Maze of Terror song is “Hatred and Repression”, and for those who didn’t read my review of Skullcrusher, it’s a murderous onslaught of evil thrash. The riffs are blazing fast and catchy as fuck, but the band switch away from the all-out flamethrowing with slower segments that are made for headbanging (and those still jab plenty hard, too). The vocals are total vomit spews, and the guitar solo is like all the ones I’ve heard from this band so far — absolutely sick, twisted, and boiling. I can’t get this song out of my head, and don’t want to.

The Amken track (“Adrenalin Shot”) is impressive, too, a piece of pedal-to-the-metal, balls-to-the-wall retro thrash. It doesn’t have quite the evil power or dynamism of Maze of Terror, and the vocals are in the school of high screams rather than the kind of abraded, rancid, filthiness I tend to prefer (a la MoT). But “Adrenaline Shot” is a dose of jet-fueled fun that’s definitely worth checking out.

The split is available for order on CD here.

9 Responses to “SEEN AND HEARD: DEMIURGON, MAZE OF TERROR, AND AMKEN”