In the wake of Amiensus‘ excellent 2013 debut album Restoration, their split that same year with Oak Pantheon entitled Gathering, and their cover of Forefather’s “Wolfhead’s Tree” last fall, the band’s new album Ascension has become one of our most highly anticipated of 2015.  In May we had the pleasure of bringing you the premiere of the album’s first single (“What Worlds Create”) and today we bring you a second one: “One In Spirit” — and an update about the band’s forthcoming tour.

“One In Spirit” displays the band’s talent for uniting sublime melodies with hammering riffs and rhythms that get the blood pumping fast and hard. The pairing of clean, soaring vocals and harsh growls symbolizes that joinder of beauty and the beast, as does the integration of an acoustic interlude side-by-side with a charging gallop of jolting riffs and driving percussion, and the contrast of a mesmerizing guitar solo gliding over heavy, booming bass notes.

“One In Spirit” only heightens our anticipation for Ascension. We hope you enjoy it as much as we have.

Ascension was mixed and mastered by Arsafes and features cover art by one of our favorite metal artists, Kim Holm (which also adorns an Amiensus shirt that can be acquired through their Bandcamp page).  The album will be released on July 1, 2015. You can pre-order a digital download of Ascension right now via Bandcamp (HERE), and “One In Spirit” is also available immediately as a digital download at the same location.

In case you missed our premiere of “What Words Create”, we’re including a stream of that song below the player for “One In Spirit”; that song is also available for download now (HERE). Pre-orders of CDs and related merch will become available soon.

And finally, scroll down for an important update about Amiensus’ NCS-sponsored tour this August.

When originally announced, the Amiensus Ascending To New Lands Tour planned for this August included the band Warseid. Unfortunately, Warseid are now unable to join Amiensus on tour, but Amiensus will now be joined by Minnesota’s awesome Ashbringer. Check out their debut album Vacant (released this past April) on Bandcamp HERE. The current tour schedule can be seen below. 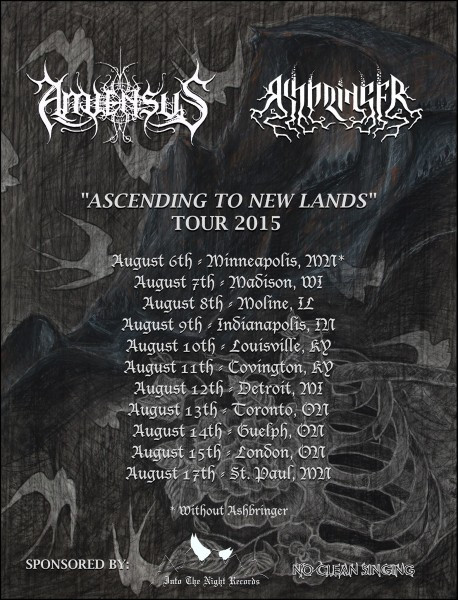 13 Responses to “AN NCS PREMIERE: AMIENSUS — “ONE IN SPIRIT” (AND A TOUR UPDATE)”