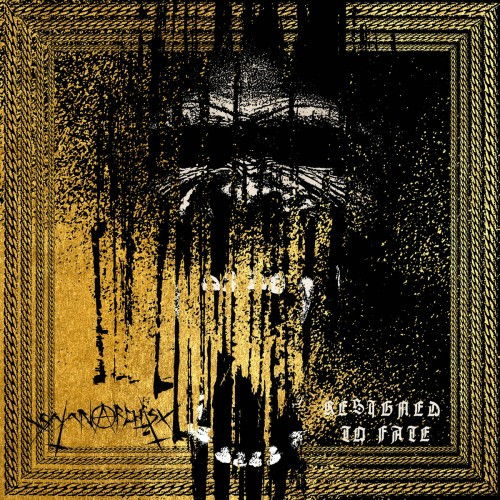 Satanarchist, from Portland, Oregon, is the first of these two bands, and this split marks their recording debut. The second band, once based in Denton, Texas, is Resigned To Fate. They have a few things in common, including the fact that Satanarchist’s guitarist John was once a member of Resigned To Fate, plus the incorporation of thrash riffs in the melting pot of their respective sounds. But it’s still best to take them one at a time. 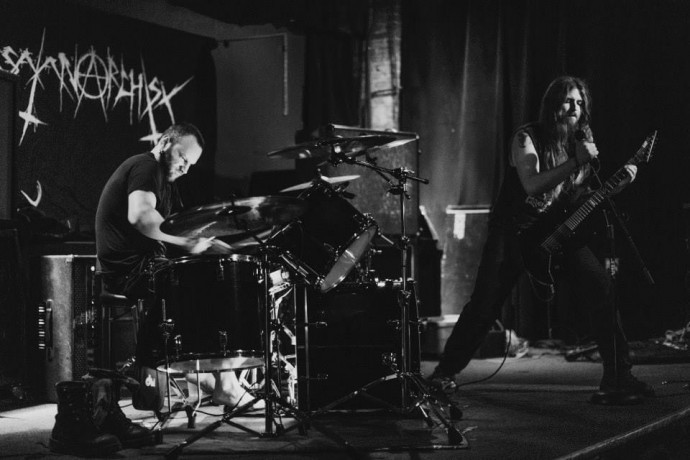 This is a vinyl split, and Satanarchist churns out seven tracks on the A side, most of them in the 2-3-minute range. They’re a two-man band — a guitarist and a drummer — but they generate a hell of a vicious racket with a boiling cauldron of ingredients that include elements of thrash, black metal, and crust, with a punk attitude that gives no fucks.

With few exceptions, the music is a torrential rush of blazing-fast guitar work and equally tumultuous drumming. On a surface level, you get the sense that the whole enterprise is about to fly apart at the seams and leave the immediate environment in a smoking, blood-soaked rubble. But on a second listen, you realize there’s a lot of technical flash on display, and changes of tempo that resemble hair-pin turns on a roller-coaster ride. With no bass and no second guitar in the mix, a duo like this needs those technical chops to succeed in generating the kind of sonic storm that envelops you in their songs — and these guys have them.

The recording has a “dirty”, crusty quality that well suits the kind of raw, feral energy of the music. I’m told that all the drums on the Satanarchist songs were recorded on the first take with no triggers, punches, or timeline edits, and no clean-up of imperfections. The maniacal, distorted guitar machinations also sound in-your-face, with no prettying up. And the reverberating vocals are equally untamed and ferocious — the kind of cancerous howls and yells that signify a bleeding larynx in the last throes of outrage.

Judging from the song titles, the thematic subjects include not only fairly commonplace blasphemous excoriations but also a backhand to the Pacific Northwest’s own brand of political correctness (and as a transplanted Texan who still likes his meat red and his (green) tomatoes fried, I can’t say no).

But perhaps the best thing about these songs is the band’s success in fusing together a lot of different elements — the high bray and squall of dirty thrash riffs, rapacious tremolo-picked hailstorms, hammering bursts of groove, and even bracing gallops — suitably peppered with shrieking feedback and gut-shaking guitar rumbles that sound like a big chopper growling to life in the red zone on an open highway. I’m digging Satanarchist a lot.

The B-side on this split consists of four tracks by the now-defunct Texas band Resigned To Fate, which included Satanarchist’s guitarist John before the band’s demise. These are previously unreleased songs that were specifically remastered for vinyl by Brad Boatright at Portland’s Audiosiege — and let me say right here that the sound of these songs is fantastic. People talk about “unearthed gems”, and these songs definitely deserve that label.

As mentioned above, the Resigned To Fate tracks also incorporate a lot of thrash elements into the songs, but the music is dynamic and multifaceted. There are slow, sludgy moments; crust/punk romps; beautiful guitar solos; dark, memorable melodies; and a full complement of thunderous drumming and whirlwind guitar explosions. I found the music to be completely electrifying — well-written and well-performed, with pleasingly vicious vocals. The songs both complement and contrast with the Satanarchist tracks, and the result is a full-length release that really holds the attention all the way through.

The split will be released on July 21 on two-color vinyl (black and gold), with a full-color jacket and insert. It’s available for pre-order now via the Bandcamp link below, and the order will also get you a digital copy of the split on the release date, and one track from each band immediately.

In addition, Satanarchist are heading out on tour in July and August, and will have copies of this vinyl split LP with them for sale. For details about the tour, please scroll down past the music player and view the very fine tour flyer. 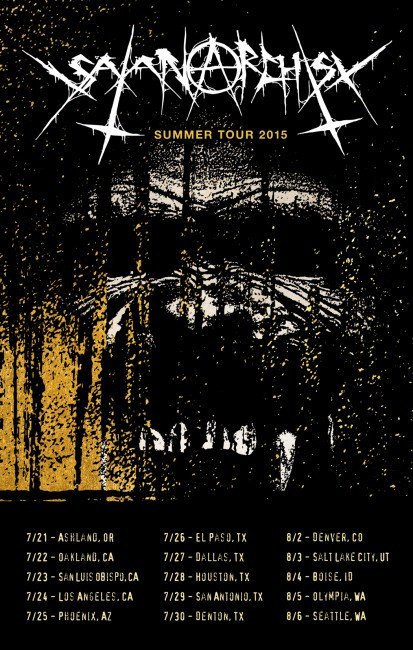 2 Responses to “AN NCS PREMIERE: SATANARCHIST / RESIGNED TO FATE — A SPLIT”