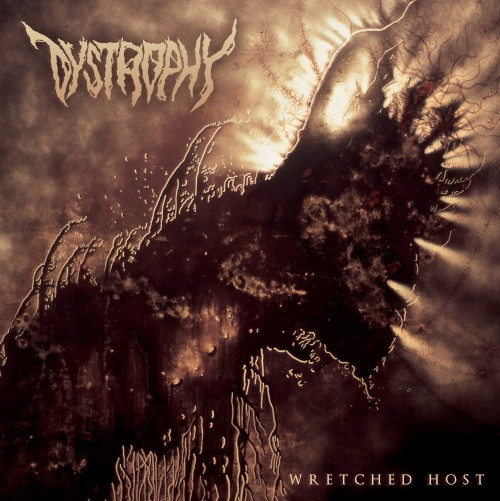 Recently here at NCS, I did a massive music drop post with no verbiage about the music due to a lack of time. One of those bands was the New Jersey-based death metal act Dystrophy, a band I’d been hearing good things about, and was reminded to check out, after forgetting, because of Doug Moore from Pyrrhon posting about them. After my post aired, the band sent me the album, so here we are to review it and tell you a bit more about what makes Wretched Host’s filthy heart tick.

Wretched Host is definitely “weird death metal” in the best way possible. It’s frequently dissonantly focused, with obvious nods to Gorguts and Deathspell Omega, yet their is a chunky old-school element to it that helps make this a thing all their own — not to mention how incredible the lead guitar is and how well it’s juxtaposed with the overall creeping and bludgeoning rhythm guitar work. 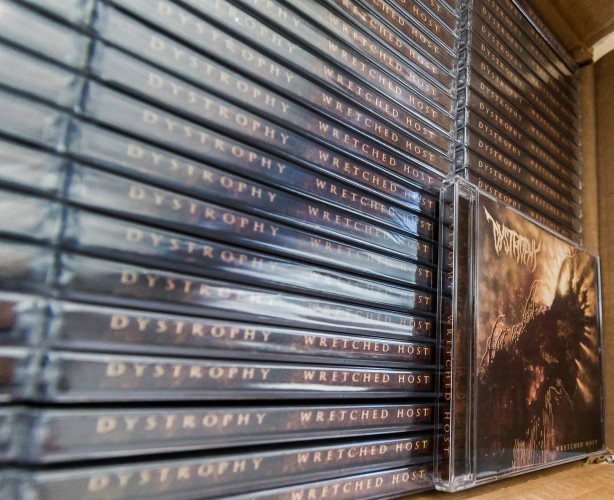 I can’t say I’ve really heard a record like this before, though the closest to it would be last year’s The Dismal Ascension by Defilementory that I wrote about at NCS. Like that record, Wretched Host superbly blends a love for old school/brutal death metal with a modern dissonant complexity, and in the process, Dystrophy have created a sub-niche within the avant-death realms as of yet unexplored.

This isn’t a typically fast death metal record. It’s fairly brooding and mid-paced overall, yet never boring in spite of its atypical slower gait for death metal. The fast moments are there, but more spread out, and never the central focus and drive of any of the songs.

It’s not that I’d dislike this record if it were blazing fast, but I certainly enjoy and appreciate the band’s willingness to venture off the beaten path by torturing the listener at a slower pace than you normally hear in death metal. The somber and eerie electric violin performances woven into opener “Apex” and closer “Nadir” also add another interesting element to the album that I quite enjoy every time I hear it.

Dystrophy have truly delivered a different death metal experience with Wretched Host, one that could almost be considered doomy, yet never simple or repetitive. If you’re one of those people who rants about how there are no new good death metal bands, or that they all sound the same, remove your head from your anus and give this a spin. You just might agree with me. Or not. It’s not like I care!