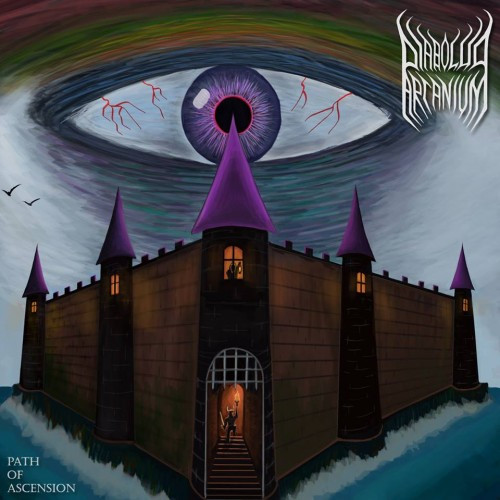 In this post we present the premiere of “Herald of Darkness”, a song from the forthcoming debut album Path of Ascension by Diabolus Arcanium from Chennai, India.

The orchestral component of the band’s music makes its presence known immediately in a waltz-like melody augmented by choral voices. The orchestration remains a dominant and dramatic feature of the song, becoming more sweeping and bombastic after the metal instruments come in and lead vocalist Hex begins to snarl his lyrics with bestial vehemence. The power and bombast of the symphonic sound lends a theatrical air to the song, with a heavy, jagged edge added by the metal riffing, the thrumming bass line, and the rumbling drumwork.

But the aural spectacle of the orchestration (arranged by keyboardist Archon) is matched by Hex’s extended guitar solo — a fiery, flamboyant performance that works hand-in-glove with the pageantry of the symphonic music.

I’m not usually a fan of symphonic metal, and bands like this one who make the orchestration such a commanding element of their sound undoubtedly run some risks — but in this case I find the music thrilling, and even “epic” (to use a word I try hard not to use). Perhaps because of the poisonous vocals, perhaps because of the ominous atmosphere of the music, perhaps because of the skill of the programming and the dynamism of the soloing, this song retains the elements of dark majesty and aggressive extremity that are too often lost. And I like what I’ve heard so far from the rest of the album, too.

I’ll be curious what you think. Comments are welcome (as always).

4 Responses to “AN NCS PREMIERE: DIABOLUS ARCANIUM — “HERALD OF DARKNESS””