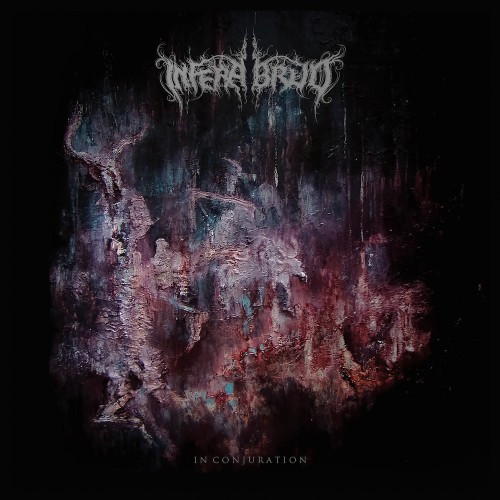 I’ve been on a Bindrune Recordings roll this week, with a review of the new Panopticon album on Monday, a review of the new Alda album on Wednesday (with a song premiere), and now this review of the new album by Boston’s Infera Bruo — and a premiere of one of its stellar new songs. I’ve been living with these three albums for a while, and life has been good. If it’s not too much to hope for some justice in the world, it should be good for these bands and this label as well.

Infera Bruo’s new album In Conjuration is the band’s third full-length, following their 2011 self-titled debut and 2013’s Desolate Unknown. In the past, the band’s music has drawn favorable comparisons to that of Enslaved, and no doubt the new album’s progressive casting of black metal will again invoke remembrances of those masterful Norwegians. These new compositions are often complex and challenging in ways that should appeal to fans who appreciate avant-garde approaches to extreme metal. But the album is also a very dark and unsettling beast, with an affinity for tension-ratcheting intensity that rarely reaches the breaking point. 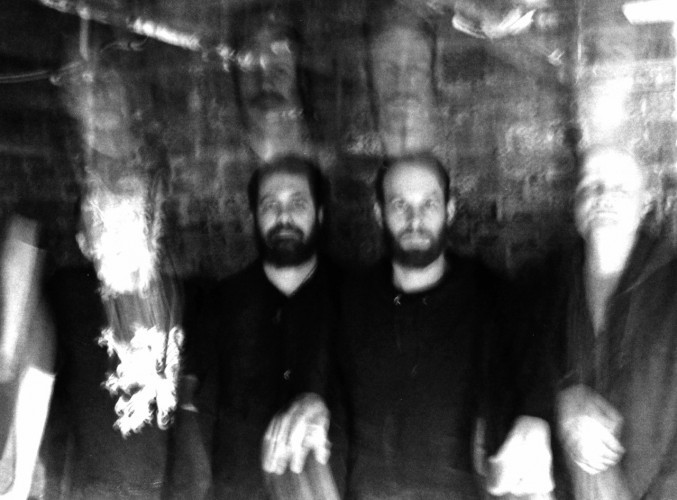 The songs are dynamic pieces of music that take their time unfolding as the band spin out intricate variations on an array of ominous — and often bleak — melodic themes. Two of the tracks (“Formless” and “Send My Ashes North”) are in the 7-9 minute range, the closing piece (“The Two of Seven”) is more than 10 minutes, and the album’s centerpiece is a three-part song named “Proclamation” that evolves over a span of almost 15 minutes. The song we’re premiering today, “Astrogenesis”, is the shortest, at about six-and-a-half minutes. Yet the songs don’t wear out their welcome, nor do Infera Bruo pad them with needless filler simply for the sake of producing a long jam. They’re mentally engrossing to hear, with the kind of depth and layered textures that repay multiple listens.

Yet the music is also very intense and full of full-throttle energy. Often, the intensity of the music is a result of the superheated fury that drives it at high speed — and the hellish, acid-drenched shrieking that accompanies the rushing instrumentals. But the music is intense for other reasons as well — the riffs are usually dissonant, discordant, and distorted, with a preference for minor keys and morbid atmospheres. They seem designed to leave you uncomfortable and on edge. But as bleak, bereft, and deranged as the melodies often are, they are yet still memorable, with a reverberating quality in the production that enhances their alien resonance.

Further adding to the unsettling, supernatural aura that surrounds large segments of the songs is the use of spectral ambient keyboard music, which lends an air of cosmic mystery to the atmospherics.

One of the many impressive aspects of the album is the band’s success in maintaining this consistently uneasy, tension-building effect while also mixing in a variety of tempos and rhythms. “Send My Ashes North” may be the best example of this: it interweaves thrash-style riffs; a rocking, rolling rhythm; chiming melodic chords; and huge bass rumbling — along with gothic clean vocals mixed with those agonizing shrieks — and yet the song never sacrifices the overarching atmosphere of forbidding bleakness.

Whether the music is galloping, ripping, rocking, or swarming like a great mass of hornets — and even in those brief moments of the album when the pacing slows and the volume tails off — the music holds fast to your attention and remains committed to its philosophy: For all its mesmerizing progressive flourishes and rhythmic dynamics, this is still black metal, dark and disquieting to the core. Outstanding music from an inventive band that’s very much worth your time.

In Conjuration is projected for release by Bindrune Recordings near the end of this month. The track list is as follows:

7 Responses to “INFERA BRUO: A REVIEW OF “IN CONJURATION” AND THE PREMIERE OF “ASTROGENESIS””