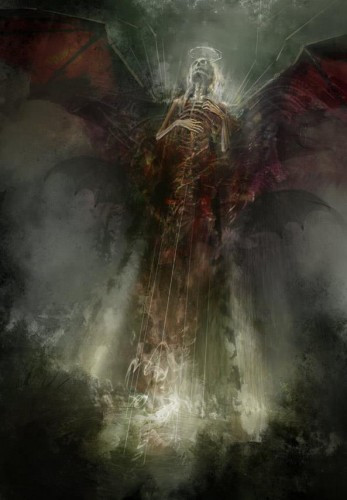 “The Clouding” by Philip Straub

At least in most metal circles, I’m an old man, in years if not in spirit. That colors the way I see things. What I see, every day through this blog, are people of all ages (but mainly people young enough to be my kids) creating art. Some of them hope for glory, praise, perhaps even a career. Others, having hoped for that once, or never at all, simply do what they must — make music or explode! For those people it’s a necessity, like breathing.

Because I am of a certain age, I’ve seen a lot. Given what I’ve seen, it would be easy to be cynical about most things but I’m not, probably because life has been pretty good to me. However, I do realize that for most people, survival and personal progress in this world require calculation, sacrifice, compromise — a whole gauntlet of vicious knives that usually happen to be antithetical to art and the artistic impulse of creative people. That gauntlet cuts up a lot of artists and then grinds the remains to dust.

Seeing what the hostile reality of daily life does to many artistic people makes me sad. Knowing what the future holds for most young, artistic people makes me glum. But at the same time I’m dumbfounded by the tremendous number of creative, talented, exuberant people out there. I’m sure it has always been that way, but I’ve only truly seen it since we started this putrid blog almost 6 years ago, and now I see it every day — great rolling floods of creativity, energy, inspiration — never ending. That makes me feel like applauding.

Our species often seems like parasites on this world, a mass of mindless, destructive automatons, with no more thought or reflection than a swarm of mosquitoes, who simply suck at the veins of everything around them, fuck, and die. You don’t have to look very hard to find that. You have to look a bit harder to realize that’s only a passing cloud, even if it never completely goes away — and that behind that cloud there is light, or more accurately millions of lights. Some of them are like fireflies, burning brightly and dying quickly. Some persist. I’m talking about musicians, of course, and many other artists.

It really does amaze me. Even though I spend more time than most people listening to music, and concentrate almost entirely on only one small musical niche (extreme metal), I still barely scratch the surface — and yet I still find, almost every day, new creations that I really like. I get frustrated (and a bit down-hearted) because I don’t have the time to write about everything I like, and the rest of our writers are in the same predicament. Of course, most of the music we hear and enjoy will be discovered by appreciative fans whether we write about it or not, but it still bothers me that we can’t do more.

Talented, creative people deserve all the support they can get. They deserve applause, even if they don’t get much of it. That may not change the trajectory of their lives or their careers, but showing gratitude is just good manners, isn’t it? If you ever wonder why the hell we keep going with this blog on a purely voluntary basis, that’s a huge reason (at least, in my case).

I’m not really sure where I’m going with this Saturday morning rambling, so it’s probably best to just stop now.

And do forgive me for the Latin title of this post. Whenever you translate something into Latin, it seems more serious and important, and I need all the help I can get! Here are some more Latin phrases I came across while trying to figure out the words for “sorrow” and “praise”, along with Wikipedia notes about them. They seem at least somewhat appropriate for the preceding stream-of-consciousness.

Astra Inclinant, Sed Non Obligant (“The stars incline us, they do not bind us”) (refers to free will over the astrological determinism)

Audentes Fortuna Iuvat (“fortune favors the bold”) (from Virgil, Aeneid X, 284 (where the first word is in the archaic form audentis); allegedly the last words of Pliny the Elder before he left the docks at Pompeii to rescue people from the eruption of Vesuvius in 79.)