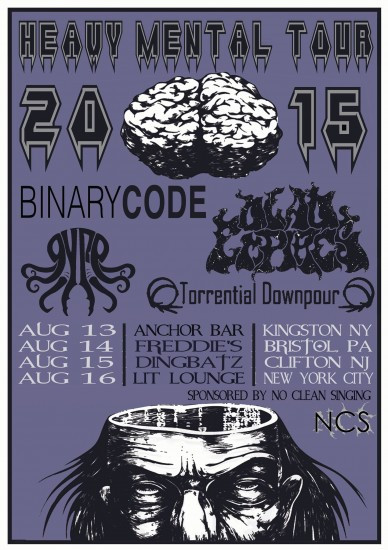 Two East Coast bands we’ve been following since early days — Binary Code and Gyre — are about to embark on a short tour, joined by two other powerful bands, Dead Empires and Torrential Downpour, and we’re happy to sponsor the tour and help spread the word about it. And if you’re unfamiliar with the music that will be on display, we’ll help introduce you to some of that as well.

The tour details are listed in the flyer at the top of this post, and repeated here:

As for the music, Binary Code have been working on a new album, which will be their first release since 2010’s Priest. They teased a new song named “Immersion” earlier this year, and you can hear that clip below. We’ve had private screening of a bit more than the teaser, and it sounds like this new release will be well worth the wait.

Gyre released their latest album Moirai this past May, and we’re including a Bandcamp stream of it below.

2015 also brought a new album from Dead Empires, entitled Secret Snakes / Silent Serpent. The album is available on Bandcamp, and below we’ve embedded a stream of all the songs as well.

And finally, Torrential Downpour’s latest release was the very well-received 2014 album Truth Knowledge Vision, and you can listen to all of it below as well, thanks to Bandcamp.

This is a strong tour, and if you’re within reach of the venues listed above, do yourself a favor and catch what these talented bands have to offer.