It’s been over two years since Finland’s Omnium Gatherum released their last album, Beyond. On August 9 they began a North America tour headlined by fellow Finnish melodeath stalwarts Insomnium — who are mounting the tour without growler/bassist Niilo Sevanen, replacing him for this tour with Mike Bear (Artisan, ex-Prototype) from the U.S. And to coincide with the tour, Omnium Gatherum and Insomnium are releasing a 7″ vinyl split, featuring artwork by Olli-Pekka Lappalainen.

Omnium Gatherum’s track on the split is named “Skyline” (Insomnium’s is “Out to the Sea”, which appeared on a box-set edition of Shadows of the Dying Sun), and it’s also being sold as a digital single through iTunes, with an expected release date of August 31 via Lifeforce Records (it can be pre-ordered now on iTunes). “Skyline” will also appear on a new OG album projected for release in February 2016. And yesterday Lifeforce launched “Skyline” on YouTube.

One of my fellow NCS writers remarked that this song includes some real “hurdy-gurdy folk guitar” on it, and so it does. Another commented that it sounds a lot like In Flames’ “Only For the Weak” — and man, that’s very true, too. It’s also very catchy.

This year Amorphis are celebrating their 20th anniversary as a band, and on September 4 they will be releasing their 12th record, Under the Red Cloud, which features cover art by French artist Jean-Emmanuel ʺValnoirʺ Simoulin. The new album includes guest appearances by Chrigel Glanzmann (Eluveitie) (played flutes on three songs), Martin Lopez (ex-Opeth) (playing percussion on one song), and Aleah Standbridge (Trees of Eternity) (providing additional vocals on three songs).

In mid-July the band released a lyric video for “Death of a King”, which is one of the songs that includes guest appearances by Glanzmann and Standbridge. When the song originally appeared I couldn’t immediately listen to it — and then after I did, I still failed to include it in a new-music round-up. But yesterday I had the chance to make one spin through the new album, and man, I really like it. So even though I’m very late featuring “Death of A King”, Amorphis are on my mind — so here it is.

Under the Red Cloud can be pre-ordered in the U.S. here. 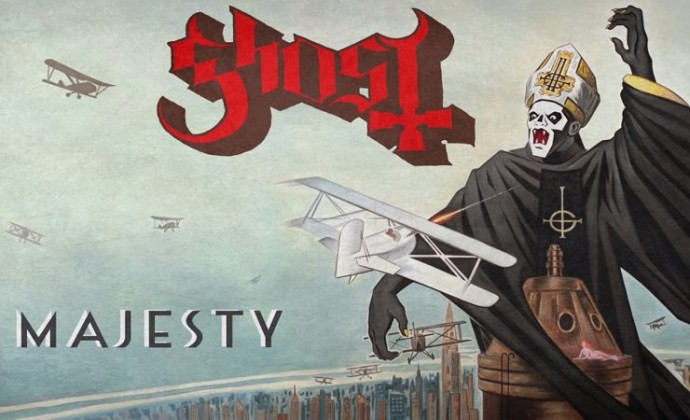 I’m also late in featuring this next song, which appeared a few days ago. Its name is “Majesty”, and it’s the fourth single that Sweden’s Ghost have released from their new album Meliora, which will hit the streets on August 21. Though the release date isn’t far away, we have not received an advance copy of the new album, and I doubt we will (maybe I should have asked for it?). But I’ve been enjoying the three songs that have come out so far.

“Majesty” is a mid-paced stomper laced with some very infectious guitar and vocal melody. As is abundantly obvious by now, whoever is behind those masks know how to write songs with serious staying power.