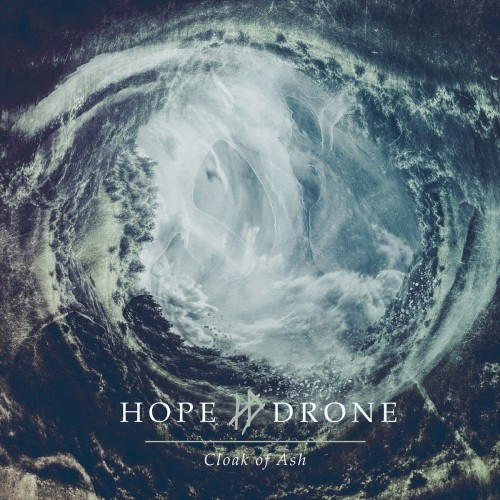 (DGR wrote this review of the new album by Australia’s Hope Drone.)

It’s not often that I am able to pontificate on the future here at NCS and actually be correct — I’m more likely in the running to be one of the kings of talking out of my ass about what may be coming to us soon (I hear tell that the batting average amongst our other writers is just as good, though, with the exception of our lovely esteemed editor whom I have been informed is correct 100% of the time and never, ever wrong), but overall I’ve found that this is work best left to the TV pundits and people who can actually make a play at knowing what they’re talking about.

I’m admittedly enthusiastic about the style of music that I love and review, but truthfully, and in my case especially, I’m a bit on the dumb side. However, that isn’t to say that I don’t have the occasional blink of brilliance. Sometimes, there will be a band and a moment for that band where you hear them and you immediately get the sense that,”Yeah, that is going to get them signed”. These times seem so obvious that it is like being hit by a fish thrown at you in an open field; you saw it coming, but you still got gills in the face.

In the case of Brisbane’s Hope Drone, it wasn’t just one moment, it was actually a series of moments. Eleven of them, to be exact. 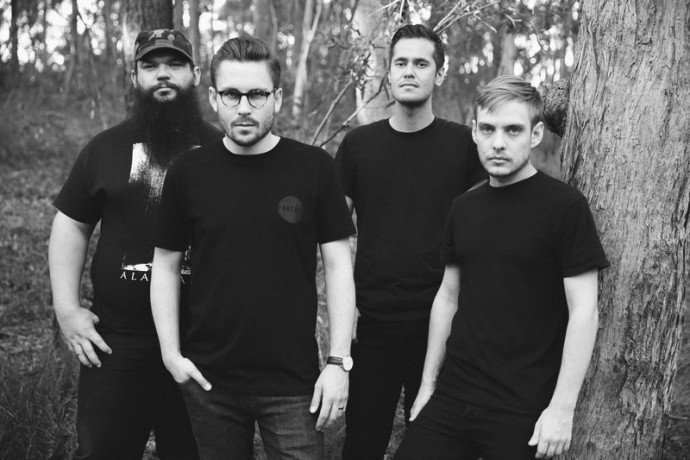 Conveniently enough, this is also the runtime for their song “Finite”, which made its first appearance on their self-titled EP that was released in 2013, as the second song in the running order. Listening to “Finite” was an eye-opener, and about halfway through my first listen to the song, I found myself pestering the other NCS folks about the song with a simple, “We need to keep an eye on these guys, they will go places with this”.

Now, I have to disclose that I came to Hope Drone late. Their EP hit in 2013 and I found out about the band in 2014… I think… website days tend to blur together. Their guitarist, noise generator, and vocals provider Chris Rowden is involved in a band called The Fevered, whom I’ve been following as they transitioned from a solid melodeath group on their 2010 EP Vestige into a full-blown noise/d-beat punk/hardcore band on the 2012 release Blackout. And it is through them that I found Hope Drone and their own self-titled EP.

Long story short, I probably wasn’t on the cutting edge and I’m sure that a deal was in the works for some time, but I believe it was on the strength of the song “Finite” that Hope Drone eventually found a home on Relapse Records and were able to put out their late-July debut full-length, Cloak Of Ash. Of course, with a lot of words typed about said band, I still haven’t said a word about the music.

Attempting to describe bands these days sometimes feels like an exercise in Thesaurus abuse, constantly digging for words to place in front of suffixes and prefixes so that we can somehow make a feeble offering at the altar of trying to describe some new fusion of sounds we have already crossed paths with, now assembled into some new unholy ghoulash that just so happens to “work” — a practice that has become exceedingly terrifying for someone who failed grammar tests pretty consistently throughout his schooling years.

At some point, with the usage of post- and blackened- and everything-in-between band descriptors, some reviews are starting to read more like the menus of a fancy steakhouse; and I’m half-expecting to find a notice from the FDA that eating raw or undercooked food can cause illness and that they may contain chemicals known to the State of California to cause cancer.

Thus, it is difficult to describe Hope Drone, because they are that unholy combination that I mentioned above — a fusion of post-hardcore, punk, black metal, and yes… drone, as well as pretty much everything in between that could be tossed in to give listeners the images of “anguish”. They play songs that cover massive expanses of time and consistently drift well into the ambient realm, so much so that you don’t drift with them so much as fall into a hypnotic daze, only to awaken twenty minutes later with absolutely no idea how the hell you’d landed on the next set of blastbeats and howling yells.

I’m expecting quite a few reports of alien abductions due to missing time, people thinking that Cloak Of Ash is only a half-hour long yet are somehow missing thirty minutes they can’t account for. This is an album that has its roots just as deep in the theatrics and overblown echo and tremolo effects of black metal as it does feeling like a noisier and more suffocating version of Gospel’s The Moon Is A Dead World.

Truffle oil is available for $2 extra.

Cloak Of Ash is a difficult album to handle — not a bad thing — but it is one of those rare albums that at times can either be taken as one entire, solid run or consumed in two pieces. The music contained within stretches the boundaries of how long a song can go, and with the seven tracks on Cloak Of Ash, Hope Drone seek to make use of almost every minute the band are allowed to fit on a standard disc. The songs easily stretch into progressive-music length, but obviously Hope Drone aren’t in the prog genre, and the music itself tends to shoot past progressive into oppressive at times. But mostly, Cloak Of Ash is just overwhelming.

The band offer a lot to play on your senses here, and the “recorded in one take” style of production that the band have for this disc makes the Cloak Of Ash experience feel like the band are playing directly in front of you in a small and packed club, with the listeners parked right in front of the PA without earplugs. It can be deafening at times, with how much the band seem to just be railing on their instruments rather than actually playing them. Hunks of Cloak Of Ash seem to be composed strictly by rule of, “Okay, you just blast for a few minutes straight and I’m just going to see how close I can get to breaking every string on this guitar and whatever sound that makes? Awesome”.

Cloak Of Ash’s opener, “Unending Grey”, is the one song that probably caused the most serious cases of whiplash when we all did our collective double-takes upon seeing the track times for Hope Drone’s debut. A good majority of the songs on Cloak Of Ash stretch easily into the ten-minute realm, huge swirling hurricanes of sound that are perfectly content to park over the listener’s head and provide plenty of doom and grey. “Unending Grey”, on the other hand, is a twenty-minute song.

I often joke in my reviews about bands erecting a barrier to entry on their albums — making sure the weak do not pass — by putting a long song up front, or a track that is dense with material so as to become a challenge to get through. But Hope Drone take that analogy and spin it on its head by doing both.

Now granted, the band have Drone in their name, so the fact that the music takes on that aspect should be none too surprising. But Hope Drone didn’t erect a barrier to entry for Cloak Of Ash on their first song so much as they have erected a wall — and then put another wall on top of it, and then camped out on top of that with their feet dangling over the edge just to see who was going to challenge them and meet them at the top.

“Unending Grey” is Unending in its own right and could have served as an EP on its own, but it is just track one, and one of the reasons why Cloak Of Ash is an overwhelming experience. It is the type of album where you seek to be washed over, hit by wave after wave of sound. Choosing to do the full run from “Unending Grey” up through its closer, “Carried Apart By The Ceaseless Tides”, is a guarantee that you’re going to have it happen. Cloak Of Ash is the type of album where you play the part of wreckage being carried to shore by crashing waves, and I imagine the sounds heard under the water are probably close to what much of Cloak Of Ash feels like.

“The Waves Forever Shatter Upon Our Shores” seems almost austere, coming in at a little under six-and-a-half minutes, Hope Drone’s experimental grind song for the disc. Obviously, that’s not the case, as “The Waves Forever Shatter” continues the poetic-song-name trend (other highlights: “The Chords That Thrum Beneath The Earth” and “Every End Is Fated In Its Beginning”), and the ever-endless amount of sheer hopelessness the band deliver across the time that Cloak Of Ash spends in your ears.

That song contains one of my favorite sections on the disc, however, when the almost relentless blasting and railing of instruments, the howling of the vocals and the endless hum of the bass, come to a stop and shift, the song shattering upon its own shores and becoming a slow, churning bit of crashing cymbals and simple drumming. The sudden shift to a stomping rhythm to close out the song comes at the perfect time, as it really does hammer home the end of the song before it spills over into the aforementioned “Carried Apart”, which closes out Cloak Of Ash.

Hope Drone are the art-metal collective’s wet dream in some senses. They’ve got the perfect amount of post-everything, noise-everything, hardcore-punk thrashing and fit-throwing, and theatrical elements to their sound, so as to insure that Cloak Of Ash at the very least will be considered an experience. Over the past few years, Metal has seen quite a few of these acts, and if you’ve been a fan of huge effects on guitars for the sole purpose of causing them to echo across rooms, sending them higher and higher into clipping territory, then you’ve been enjoying quite the renaissance the past few years.

Cloak Of Ash, despite erecting its own barrier you must cross to even get into it, has some walls of its own to break down, because discs like this can obviously be met with a healthy bit of skepticism. This album, though, doesn’t spend its time naval-gazing at its own wonder, or spending hours on end drifting in its own ambience. Instead, the disc is relentless, even with its long run times, in building up a hazy atmosphere of hopelessness that is about as close as we’ve come to drowning in audio form in some time.

Hope Drone’s droning element lends the band a hefty dosage of doom in each of their songs, and even if the music were to contain some form of positive message, you couldn’t really tell in these long compositions. Instead, you’re left to be washed over and carried out with the next tide, overwhelmed by the massive amount of music Hope Drone have laid before you.