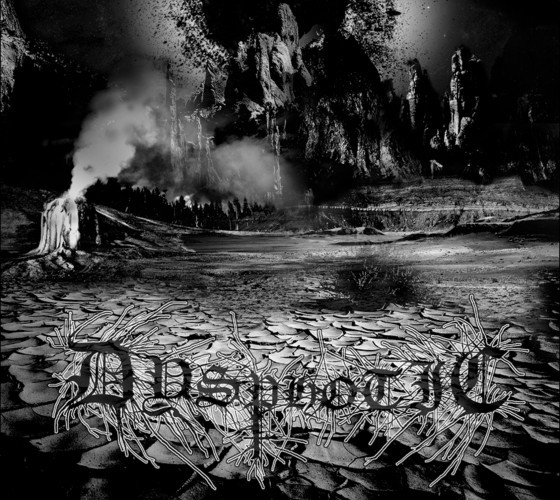 Santa Fe, New Mexico, is a one-of-a-kind town in a remarkably beautiful location. I’ve been fortunate to visit there three or four times over the span of my ancient life, but I couldn’t recall coming across any Santa Fe metal bands until I was introduced to Dysphotic about a month ago. What I heard then was a single called “All Consuming” that the band had released in advance of their debut EP, Chaos Terrain, and I really enjoyed it. And that led to this:

On August 29, Dysphotic will officially release Chaos Terrain, and we’re now giving you the chance to hear it in advance through our full stream of all the songs. And you really should make time to listen. Here’s why:

Dysphotic have a precocious knack for crafting Lovecraftian songs that give off great rancid clouds of putrefaction and peril, while at the same time making them so catchy that you find them squirming through your head like parasitic brain worms. In addition to one lethal riff after another, the songs also have a thick, floor-shaking low-end sound, with great tone in the rhythm guitars, concrete-heavy bass lines, and a gut-rumbling drummer who does a nice job mixing things up (and displays impressive technical skill while doing so).

Dysphotic have clearly studied the venomous, morbid ways of death metal progenitors like Incantation, but the music also incorporates other kinds of death metal ingredients (the vocals have a brutal-death quality, for example), and the EP has a modern sound, with melodies that are hooky as well as dismal. Each track also has its own distinctive character — they don’t all run together, and they don’t all sound alike. The atmospheric penultimate track “Corrupter of Flesh” happens to be my favorite (by a nose), but this EP is all killer, no filler, from beginning to end.

Speaking of the end: The one song that’s hands down the most distinctive, because it’s so radically different from the others, is the closer, “Persephone”. It’s a slow, narcotic stew of doomy stoner metal with really good, soulful, clean vocals that could hardly be more different from the grunts, growls, and squeals you hear in the rest of the EP. Kudos to Pascual Romero (who was once the vocalist for Pathology) for pulling off that retro vocal sound so well.

I’m not entirely sure what the band were up to when they recorded “Persephone” and tacked it on the end of this EP, but regardless of what they intended, what they accomplished was to prove that they’re really talented songwriters and performers who might just be able to pull off whatever they set their minds to.

(P.S. It turns out that guitarist Zac Hogan used to be in the New Mexico doom band Drought [whose music you can listen to here and here] and that everyone in the band is a fan of the stoner genre. “Persephone” was recorded for fun, and it sure is a fun surprise lurking at the end of this release.)

In a nutshell, this EP is a small gem that came out of left field and it’s well worth your time.

Chaos Terrain will be available for streaming and download at this location on or before August 29:

6 Responses to “AN NCS PREMIERE (AND REVIEW): DYSPHOTIC — “CHAOS TERRAIN””