Mgła ‘s new album Exercises In Futility crept up upon us, like some stealthy night creature. One day, not long ago, there was simply an announcement out of nowhere that it was finished and would be released, and a song appeared. And then this weekend it pounced for all to see (and hear).

The album was to be streamed publicly for the first time on the day of its release, but then some asshole leaked it, and the band then promptly decided on Saturday to upload all of it for streaming on YouTube. The cause may have been deplorable, but the action was like a gift to those of us who relished their first two albums and have been impatient to hear this one.

I encourage you to read the lyrics before listening to the album. Apart from the insights they provide into the music itself, they are as fascinating, as well-formed, and as harrowing in their poetry as what you will hear. 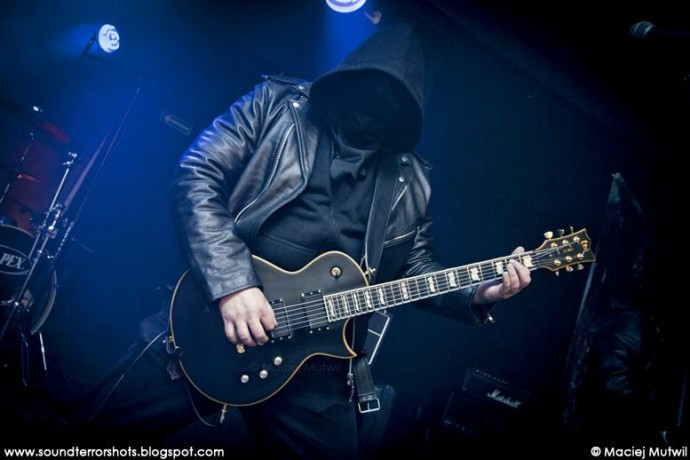 For those who may be new to Mgła, the band (whose name means “fog” in Polish) was started in 2000 and now consists of guitarist/bassist/vocalist Mikołaj “M.” Żentara (who is also a member of the fantastic Kriegsmaschine) and drummer Maciej “Darkside” Kowalski. Their last album was 2012’s With Hearts Toward None, which was tremendously good — but I do think Exercises In Futility is their crowning achievement (to date).

Those lyrics I think you should read first are almost unbearably bleak and despairing. They speak of “the desert within ourselves”, we who are “disciples of Oedipus… led by stray dogs”, surrounded by failures, misery, filth, discord, and horror. They speak of prophets and rulers constructing edifices of deceit, convincing others to spend a lifetime connecting the dots, when there is no pattern, “as if everything was to be made right one day”:

The songs are numbered like chapters, and otherwise have no names. They are as grim as the lyrics, yet through them beats the steady pulse of intense emotion, and the melodies, though undeniably bleak, are tremendously memorable and often sweepingly beautiful in their own forlorn way.

The songs are very well-crafted. Each is built around a collection of masterful musical motifs, with the often dissonant riffs and rippling/pulsing lead guitar passages driven home through repetition, sometimes calling to mind the more industrialized addictive qualities of Kriegsmaschine. Underneath the shimmering swarms of melody a deep, grinding undercurrent flows, like the immense current of the Styx. But the pneumatic bass lines in this album are one of the keys to its strength — they reach in, grab you by the spine, and bend your body (or at least your neck) to its will.

Full credit must also be given to Kowalski’s drum performance. The variations in drum patterns, from majestic marches, to rocking back-beats, to martial tattoos, to metronomic blasts and cascades of double-bass — all are well-chosen and well-timed, driving these intense and immersive songs with a steady hand, and providing a key ingredient to their compulsive vitality.

If there were any doubt before, Exercise In Futility proves that Żentara is a riff-making genius. Every one of these songs is intense and intensely infectious. It’s heavy metal made for adrenaline junkies, black metal for people who want lashing, slashing chords and hornet swarms of transfixing lead-guitar melody wrapped around a huge rhythmic drive train that could only fail to move the dead.

Żentara’s harsh, ugly howls shriek ugly truths, but this music provides the counterargument: This music is full of life and passion. As dismal and bereft as the melodies often are, these songs will transport you, ultimately unfolding at the end of the album in a panoramic vista. Perhaps it is a netherworld that we were meant to see, but in effect it provides another reason to face the next day: With music like this in it, life is well worth carrying on.

People like me, who lurk in the byways of the interhole for unhealthy amounts of time in search of new extreme music, discovered the surprise debut of this album very quickly on Saturday. By Sunday I saw more than one friend and more than a few esteemed musicians already proclaiming it album-of-the-year material. As most of you know, I’m incapable of making end-of-year lists, much less deciding which is the year’s best album. But I’m certainly capable of opining that it is in select company as one of the best and most consistent albums I’ve heard in 2015, a triumphant work that I expect to return to many times in the coming years.

Carve out 42 minutes from your day and give this your full attention; I think you’ll be very glad you did.

Exercises In Futility will be released on September 4. Pre-orders for the album, on both CD and digitally, can be placed here.

29 Responses to “MGŁA: “EXERCISES IN FUTILITY” (A REVIEW)”