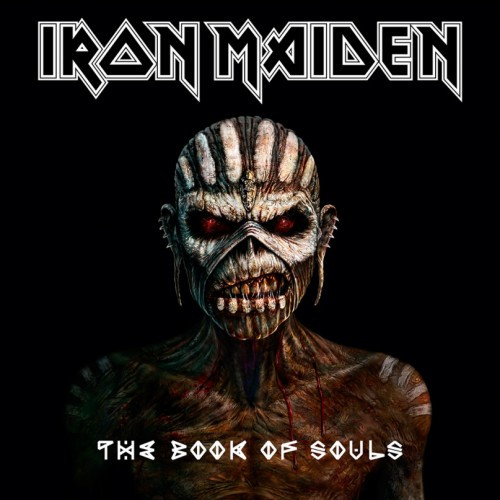 (Wil Cifer reviews what may be the final studio album by a band named Iron Maiden.)

Iron Maiden is right behind Black Sabbath when it comes being one of the most revered classic metal bands of all time. This is for good reason, as they have maintained tons of integrity over the years, even if they did break down and use keyboards and made the poor choice of trying to replace Bruce with Blaze. Line-up changes and tweaks to nuances in their sound aside, in the bigger picture of their legacy, they have never really whored themselves out by appearing on American Idol, which sadly is something Rob Halford cannot say. So for me the bar is held really high when it comes to this band, and if you have any questions as to my devotion, all I need say is that I have The Number of the Beast album cover tattooed on my left forearm… what do you got? So I have been upping the Irons since 1984.

Going into this album, the trepidation I had in regard to how it would uphold their legacy was due to the Dickinson’s much publicized battle with throat cancer and how that would affect his voice. Then there was the cowbell-infected lead single off the album, “Speed of Light”, which might have quelled my fears of “will Bruce still have it” and replaced them with “will this album be filled with cheesy rock n roll”?

Once I got past the synths the band once claimed they would never use, which open the new album, and focused in on Bruce flexing his invincible Iron pipes, I was able to breath easy at the very Maiden gallop of “If Eternity Should Fall”. The first thing that came to mind was that musically the song would not be out of place on Somewhere in Time. A common theme with this song and many others is the tendency to sprawl out and leave a labyrinth of guitar harmonies, solos, and progged-out bridges. When it comes to Iron Maiden, I am more than ok with that. 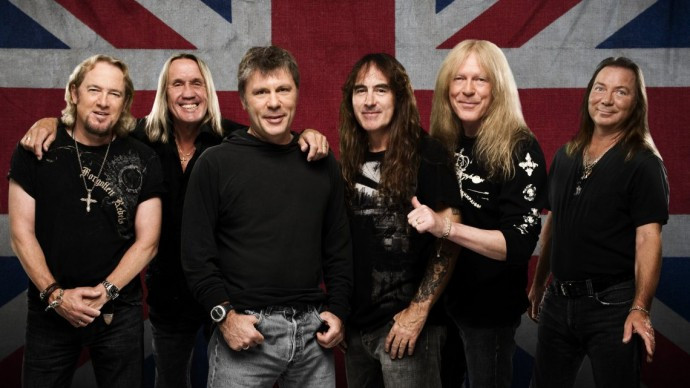 You know how thrilled I am about the rock n roll cowbell that leads off the second track, “Speed of Light”, which also doesn’t feature the band’s best lyrics, but I would not go as far as to say they are just punching the clock. After the single comes “The Great Unknown”, where you might begin to notice the band is utilizing a broader scope of guitar sounds — embracing a darker melodic sensibility recalling the moodier moments from Fear of the Dark before they bring down a more satisfying chug.

It is worth mentioning that, given their ages, we might need to accept the fact that this could very well be the last studio album. By the time I got to the bass chords that lead into “The Red and the Black”, showing that even Steve Harris was willing experiment tonally, I became willing to accept this album as a fitting swan song. I would rather this be the end than for them to put out two or three embarrassing albums, like Paul McCartney keeps insisting on. “The Red and the Black” finds the band galloping into the kinds of riffs and melodies that power metal bands have been biting off of for years. It reminds me of “Alexander the Great”. There are some choruses of “whoa woahs”, before wandering off into another proggy solo section where they reaffirm that they put the epic in metal.

There is more of a rock feel to the riff leading into “When the River Runs Deep”. Bruce drops down into his huskier “The Evil That Men Do” mid-range. Aside from “Speed of Light”, this is the only other song that doesn’t reach as deep into their well of inspiration. But even Maiden just dialing it in is better than the collective whole of Swedish metal has been able to accomplish.

The title track closes the first part of the album; for people who still buy albums, this is being sold as a double album. The title track is one of the album’s heavier songs, with a creeping riff that is darker than much of their more recent material. At the same time, thinking of this as one of the album’s heavier songs makes me reflect on how metal has changed since the glory days of Iron Maiden, and about how for kids living in the trailer parks of Iowa who have grown up with bands like Behemoth as their reference point for metal, this might seem like the sound track to a Miller High Life commercial. 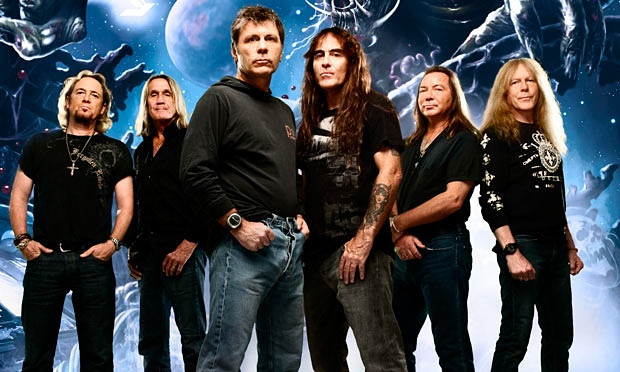 So, heavy or not, it’s the songwriting and musicianship that has made their music stand the test of time and that is still intact, with the tight riffing forming solid headbanging grooves, thanks to Nicko’s solid playing. Bruce can still hit the notes in his chest register without sounding too strained. Younger bands could take notes from their ability to pull off the ten-minute songs, as it wasn’t until the seven-minute mark that I checked to see how far long I was. With most droning black metal bands who release albums consisting of three fifteen-minute songs, I’m doing this every three minutes.

The rapid-fire attack of Aces High is never in evidence, but they inject a fair amount of energy into “Death or Glory” (which begins the second part of this double album), a song with lyrics giving the same perspective of the battlefield that Aces High and The Trooper both have.

Unlike Motörhead’s new album, the riff recycling is far and few between, with the only noted exception the uncanny likeness the opening riff to “Shadows of the Valley” has with “Wasted Years”. This is quickly forgotten when the band jerk you back into the classic gallop. “Tears of a Clown” is not a Smokey Robinson cover, but a mid-paced galloping ode to a clown who doesn’t change. Hopefully Juggaloos won’t get wind of this. When the solo section comes, which it does for most of these songs, you begin to appreciate them, as this is one of the rare albums where the guitar solos actually add to it.

The theme of sadness continues with “The Man of Sorrows”, an arena-rock power ballad that speeds up at the two-minute mark. A well-penned song which holds up to their post-Fear of the Dark work, which is all I expect from them at this point, and there are plenty of moments exceeding that and leaving me happily surprised.

The longest song the band has written, “Empire of the Clouds”, closes the album. It is ambitious for many reasons. Bruce handles the piano parts… yes, piano parts. He is no Rick Wakeman, or even Tori Amos for that matter, but it works for them to layer the a string section over it… yes a string section. You begin to feel this is their “Bohemian Rhapsody”, as it starts as a folk-inflected dramatic ballad that of course builds into power chords at the four-minute mark. It might be very different for Iron Maiden, but it retains many of trademark Maiden intervals, both vocally and from the guitar phrasing. Lyrically, the nautical narrative is about another odyssey not unlike “Rhyme of the Ancient Mariner”. The guitar line that comes in at the eight-minute mark is a little too happy for me. The pay-off when they start rocking back into it at the 13-minute mark isn’t as big as that on “Rhyme”. It’s proggier and not bad by any means. 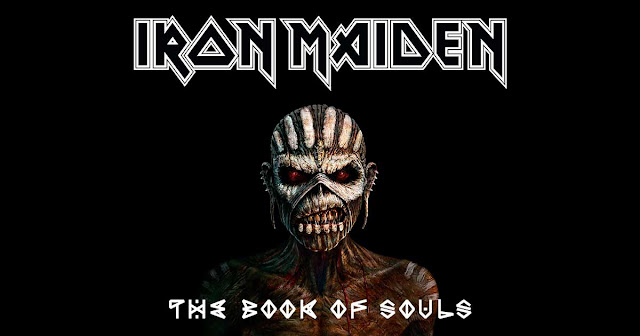 Have they done better? …Yes. Is this on the level of the albums that came before Fear of the Dark? …No. But before we throw Eddie out with the bath water here, consider how high that bar is, and really, how many metal albums are as good as Piece of Mind, Powerslave, or even Seventh Son? I can count them on my fingers and toes. If this is a bittersweet goodbye, then it is more than acceptable.

Metalheads are notorious for not liking change. I am no different. I am willing to admit that given time, when I look back on this album as my grandchildren are playing it for me in an oxygen tent on their iFingers, I’ll tell them ”They don’t make metal like this any more, turn that damn thing up! Did you put some King Diamond on there for me?”

The Book of Souls will be released on September 4 and can be ordered here:

8 Responses to “IRON MAIDEN: “THE BOOK OF SOULS””