I have some round-ups of new and newly discovered music to send your way today and tomorrow. By coincidence, much of what I found yesterday that hit me hard were songs that in very different ways lay the mantle of doom upon your shoulders, and those are all collected here. The music pulls you in, and draws you under; the light recedes while the surface grows more distant. There’s a lot of heaviness (and wretchedness) in what follows, and a lot of sublime beauty as well. The final song in the collection, while not metal except perhaps in spirit, may be the most beautiful of all.

DEAD TO A DYING WORLD

I’m not sure how we reached the 5th day of September, 2015, without ever previously featuring Dead To A Dying World on this site. We hang our heads in shame. It’s time to make amends.

Four years after their debut album, this seven-piece Dallas band have a new full-length named Litany that will be released on October 16 by Gilead Media and Tofu Carnage Records in the U.S. and by Alerta Antifascista in Europe. It features cover art by the talented Sera Timms.

Yesterday, Decibel premiered a 16 1/2 minute song named “Beneath the Loam”, and the title tells you something about the atmosphere of the music — but far from everything. 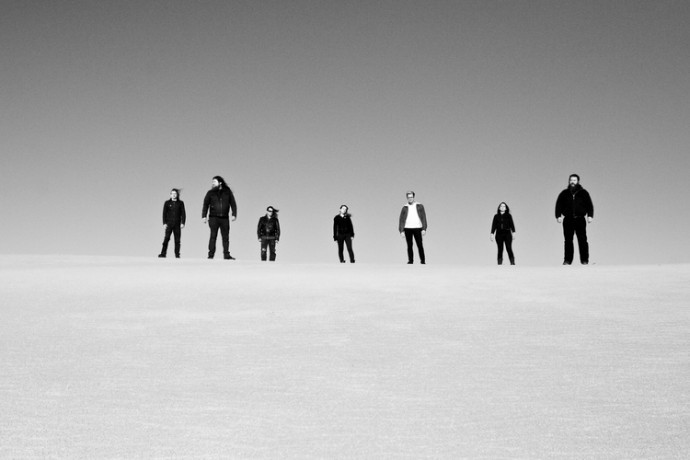 The weeping sounds of a violin dominate the song’s introduction, soon joined by high, clean guitar notes paired with grinding, sludgy riffs. But that sweet, soulful start gives way to a pavement-splitting riff-and-drum fury and ferocious vocal howling. And so the song goes, alternating between spacious passages of bleak, bereft beauty and segments of earth-shaking agony (made even more jolting by the huge rumble of the drums), until the building intensity falls away in the song’s desolate mid-section.

The song’s final third is another slow-burning fire, smoldering at first and eventually building to an emotionally incinerating climax, with the decimating sounds of the violin drifting like a wraith over an avalanche of percussion and a meat-grinding bass line. An engrossing song, and a devastating one.

P.S. Dead To A Dying World will be embarking on a tour in October. Here’s the schedule as it now stands: 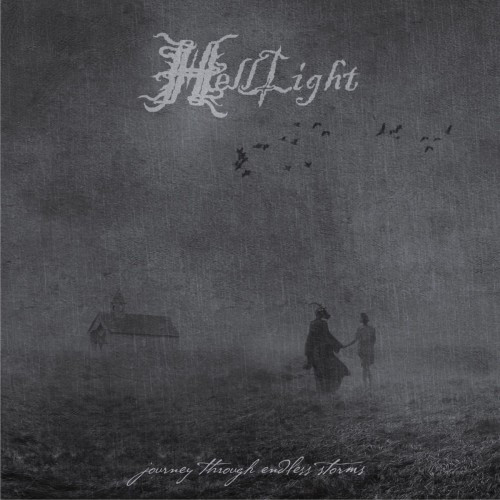 When I think of Brazilian metal, I tend to think of high speed and explosive impact. But HellLight are a Brazilian funeral doom band, who have found chilling cold in a warm climate. Their fifth album, Journey Through Endless Storms, was released on September 7 via the doom standard-bearer Solitude Productions. Though I haven’t listened to the entire album yet, that’s due in part to the fact that I’ve gotten stuck on the album’s title track, which is available on Bandcamp.

It begins with the sounds of rain, thunder, and a woman’s beautiful voice — followed by an emotionally intense keyboard piece that’s soon joined by glacial, titanic riffs and lyrics voiced in an equally titanic growl. The music is a magnificent hybrid of the crushing and the sublime, the sound of both dashed hopes and also bloodied arms raised in yearning to the stars. It’s a union of atmospheres — of cataclysmic loss and mystical transcendence.

As the song unfolds, it grows in emotional power, and those cavernous growls are joined by soaring clean vocals that are spine-tingling. One of the best funeral doom songs I’ve heard all year. Someday I may be able to move past it to the rest of the album. Maybe. 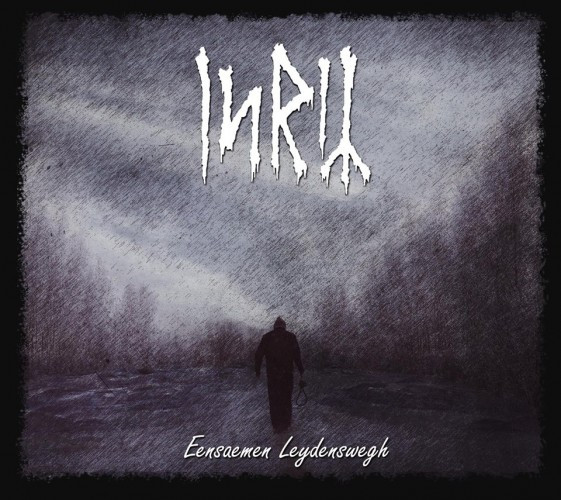 In these regular round-ups of new discoveries I focus almost exclusively on brand new music, but the remainder of this post consists of songs that have been out for a little while. The first of these is the opening track to a May 2014 album entitled Eensaemen Leydenswegh by a band from Flanders, Belgium, named IJsrijk (and no, I don’t know how to pronounce that).

“Ten Ende Der Rune” is the song’s name. Like the last song in this collection, this one begins with the sound of rain, but these are soft sounds, and the layered guitar melody that soon emerges is clean, reverberating, and wistful, with spoken-word vocals that are as sombre as the music. But the self-reflective mood changes as bleak, harsh riffs and harrowing howls come in, and the rumble of double-bass staggers the song with added weight.

It’s slow, stately, majestic music, a combination of atmospheric black metal and doom, with vocals that vary between bitterly anguished clean cries and savage, heart-rending howls. It creates an atmosphere steeped in misery, but with an ethereal ambient overlay that gleams with cold beauty. And before the song ends, it storms like a typhoon. Fantastic.

The whole album is available on Bandcamp, via this link: 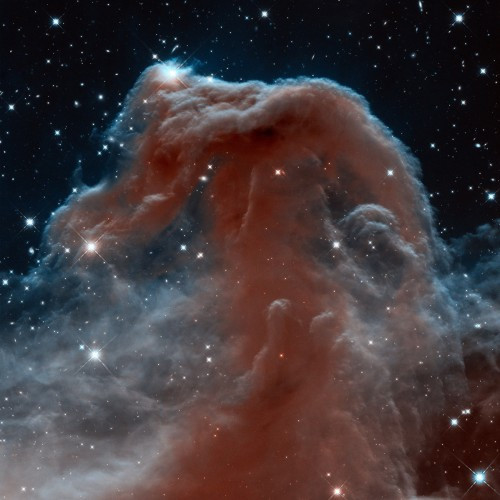 I found this next album thanks to a Facebook post by a musician who makes some pretty damned good music himself, and so I thought it would be worth checking out — and what I found stunned me. The name of the band is Mesarthim, they’re a two-person group from Australia, and they describe their music as “Cosmic Atmospheric Black Metal”. Their debut album Isolate was released in July of this year.

The album’s opening track, “Osteopenia”, is the longest song on the album at almost 12 minutes in duration. Like the other long songs in this collection, you do not count the minutes as they pass; your head is too full of wonder at what you’re hearing to do that (obviously, I’m speaking of my own head, but I’d be surprised if you aren’t similarly affected).

The music is full of mystery, with sweeping ambient melody and rippling keyboard motifs anchored to grinding low-end riffs. Throat-rupturing shrieks provide a sharp contrast with the truly entrancing keyboard melody; they keep you on edge, but not enough to prevent you from being swept away by the music’s spectacular, melancholy power. Watching images from the Hubble Space Telescope (one of which adorns the album cover) would be a great visual accompaniment to these sounds. 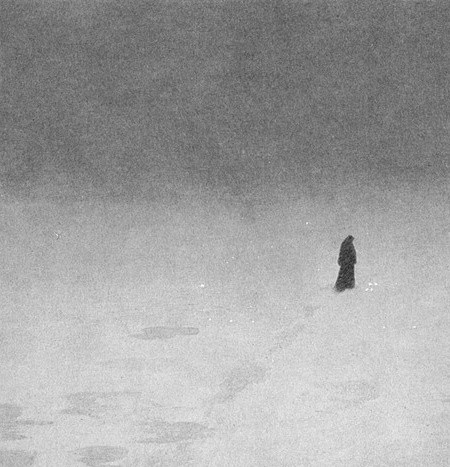 And finally we come to an album released in December 2011 by a UK band named The Cloisters, which is the creation of a UK multi-instrumentalist named Michael Tanner (aka Plinth). On this album, entitled Little Winter, he is joined by harpist Áine O’Dwyer. The hypnotic tracks are something like the intersection of medieval music and modern dark ambient music.

The song I encourage you to hear (at a minimum) is the album’s long first track, “Sorgen” — but I will be very surprised if you stop there. “Sorgen” is slow and strikingly beautiful, albeit strikingly sad. The only instruments are piano, ambient electronic tones, and gorgeous, ethereal female voices over the swelling chords of an organ. It’s not hard to imagine yourself sitting under the vault of a gothic cathedral as you listen, alone with your thoughts.

The next two songs are shorter and feature different instruments in the most prominent roles, with Áine O’Dwyer’s harp taking center stage in “Hvislyse” (joined by the plaintive sounds of violins and ambient keyboards) and “Pesta Komm” featuring the tinkling tones of something that resembles chimes or glass bells.

26 Responses to “SINKING: DEAD TO A DYING WORLD, HELLLIGHT, IJSRIJK, MESARTHIM, THE CLOISTERS”