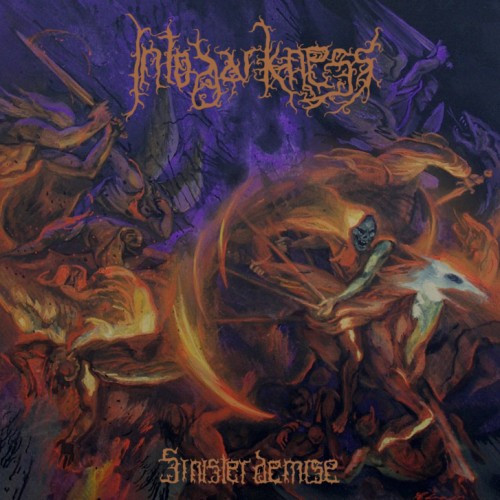 Germany’s Into Darkness trace their roots to the mid-’90s. Their debut album, Misfortunal Odes in D Minor, was released in 1997. The next full-length, an album named Dysphoria, appeared in 2012 — and now, 20 years after the band’s original formation, they are releasing a third album. The new one bears the title Sinister Demise, though the album reveals in striking fashion that Into Darkness are very much alive and as ferocious as ever. As an introduction to what Into Darkness have now wrought, we bring you the premiere of the album’s third track, “Throne Of A Thousand Miseries“.

The new incarnation of Into Darkness is still anchored by founding vocalist/guitarist Sebastian Längerer, but he is now joined by two newer faces — drummer Robert Witzel and bass-player Andreas Rigo. Together they form a well-oiled machine, and a very wicked one — and on this album they are joined by guest appearances from members of Necrophagist, Obscura, Blotted Science, and Nervochaos. 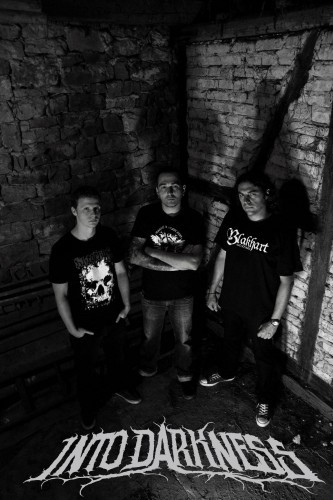 As we all know, death metal comes in a multitude of shapes and sizes. As you will hear on “Throne…”, Into Darkness remain faithful to the origins of the genre, suffusing the music with palpably morbid atmosphere and venomous intent. But they’ve done that in a way that also takes listeners on a whirlwind roller-coaster ride that may leave you unbalanced, as well as smiling with devilish glee.

Although the music generally flies fast, like a bat out of hell, the band veer without warning through a multitude of tempo and time-signature changes, displaying genuinely impressive technical skills and a skin-tight integration of all that eye-popping instrumental athleticism. Meanwhile, Längerer barks the rapid-fire lyrics in sync with the gut-punching rhythms, like a rabid mastiff straining on the leash.  And on top of all that, the band somehow also integrate a lot of barbed melodic hooks that get stuck in your quivering brain.

In a nutshell, this is a band with a knack for creative songwriting and the ability to feed the music with bursts of technical flash in a way that doesn’t overwhelm the malignant, pestilential spirit that animates all true death metal. And here’s a hint: the rest of the songs are just as good as this one.

Sinister Demise features stunning cover art by the masterful Joe Petagno (Vader, Krisiun, Autopsy). It will be released on September 11 by Rising Nemesis Records, with additional distribution by Sevared Records. It can be pre-ordered on CD and digitally at this location:

Previously, the band released a lyric video for the album’s second track (and first full song following an introduction), “Left Behind”, and I’ve included that below as well. Another track (“Manifesto”) premiered here.

3 Responses to “AN NCS PREMIERE: INTO DARKNESS — “THRONE OF A THOUSAND MISERIES””