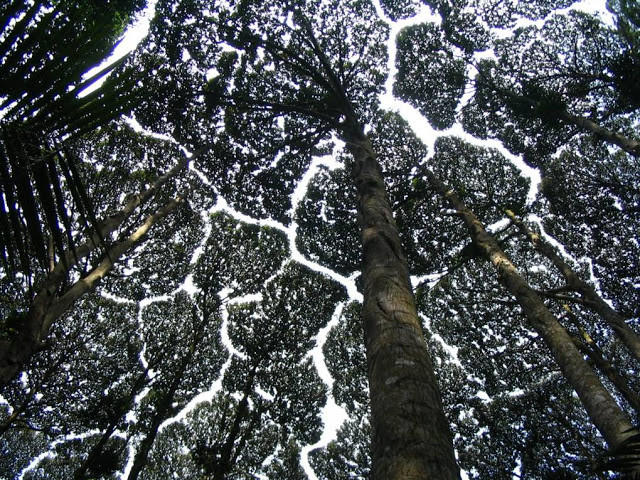 Well, I managed to compile another one of these THAT’S METAL! posts without waiting a month or more since the last one. If I had tentacles for arms, I’d pat myself on the back. (That reference to tentacles is what highly paid literary journalists such as myself call “foreshadowing”.) Today I have ten items for you that I think are metal even though they’re not music.

As usual, I’ll start with the image you see at the top of this post. It’s a photo of a canopy of Dryobalanops aromatica trees (more commonly known as camphor trees) at the Forest Research Institute Malaysia near Kuala Lampur. I was first attracted to the image because I thought it would make a cool metal album cover, perhaps for a nature-centric atmospheric black metal band — but also because it’s intriguing.

You’ll notice that the tops of the trees don’t touch each other. There are gaps that look like the channels of a river, or perhaps the branching of capillaries or neurons. There’s a name for this phenomenon, the exact cause of which is uncertain, and the name is the second reason I thought it was cool. 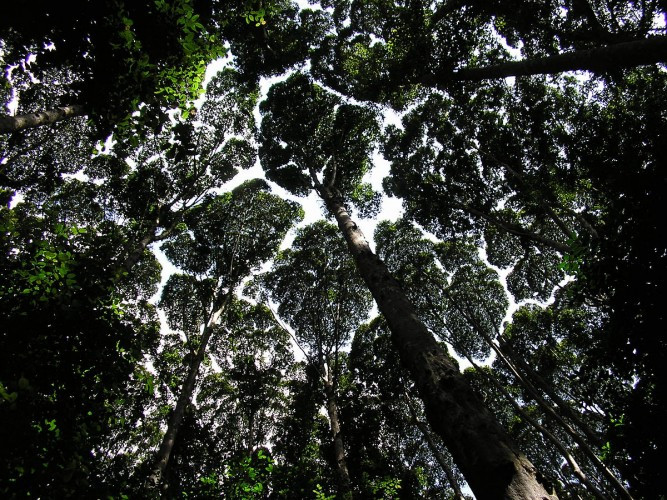 The name of the phenomenon is crown shyness, also known as canopy shyness or canopy disengagement. According to The Font of All Human Knowledge:

One theory is that the tall and slender trees in windy areas may suffer physical damage, as they collide with each other during winds. To prevent abrasions and collisions, they respond with crown shyness. Experiments show that if the crowns are artificially prevented from colliding in the winds, they gradually fill the canopy gaps.

However, Malaysian scholar F.S.P. Ng, who studied Dryobalanops aromatica in 1977, found no evidence of abrasions due to contact in that tree. He suggested that the growing tips were sensitive to light levels and stopped growing when nearing the adjacent foliage. In Betula pendula (silver birch), fewer buds develop in parts of the crown that are already dense or where the crowns of different trees start meeting, possibly because of less light.

Another explanation is that the crown shyness inhibits spread of leaf-eating insect larvae.

Here’s one more unusual image showing crown shyness (which wouldn’t be a bad band name either): 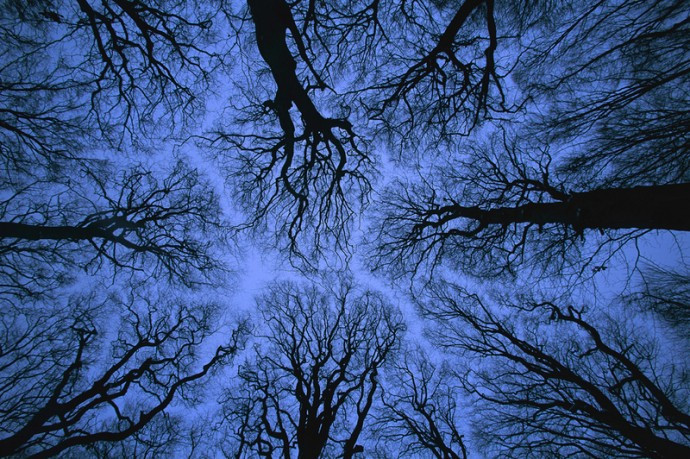 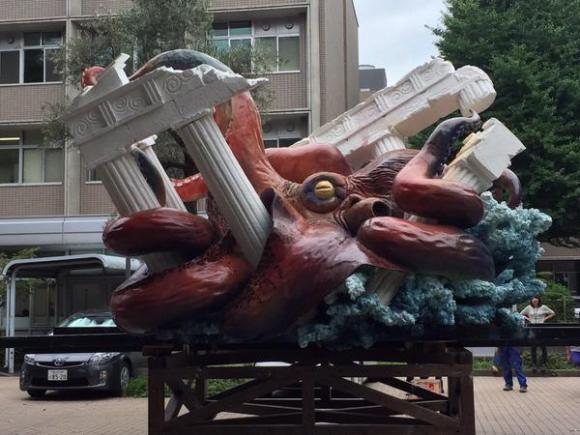 What you see above is the massive creation of students at the Tokyo University of the Arts for this year’s annual art festival. According to this article written by our Tokyo-based pal Phro, the school was “founded in 1949 through the combination of a music and fine arts school” and “is one of the most popular art schools in Japan”, having “produced a host of famous alumni, including numerous artists, directors, musicians, and designers.”

As Phro also explains, now that the festival is over, the students are seeking a buyer to take the display off their hands. Who wouldn’t want a giant rendering of an octopus wrapped around a Greek temple on their lawn? If any of you wanted to get this for me, I wouldn’t say no. (More info and photos can be found here.) 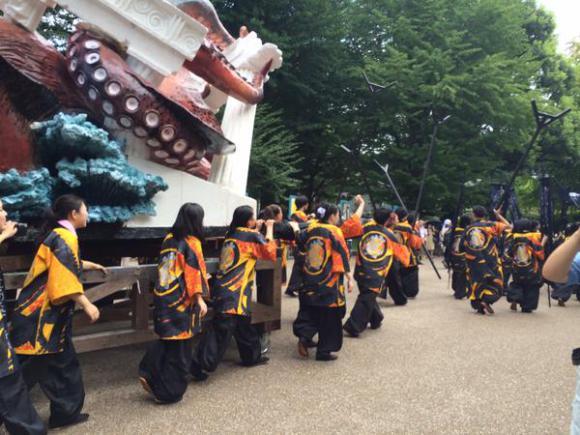 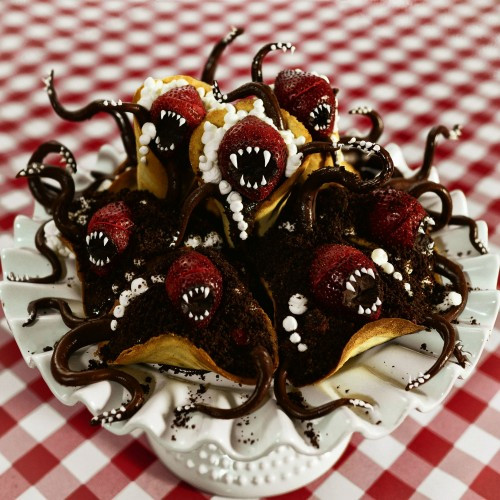 While we’re on the subject of Phro and tentacles (a pairing as natural as salt and pepper), what you’re looking at now is an edible pastry consisting of… little toothsome tentacled creations in a waffle cone. Phro sent me a link to an article about this and other confections created by artist, photographer, and baker Christine McConnell. Ms. McConnell has a wonderfully twisted imagination. Here are a couple more very metal edibles; more can be found here. 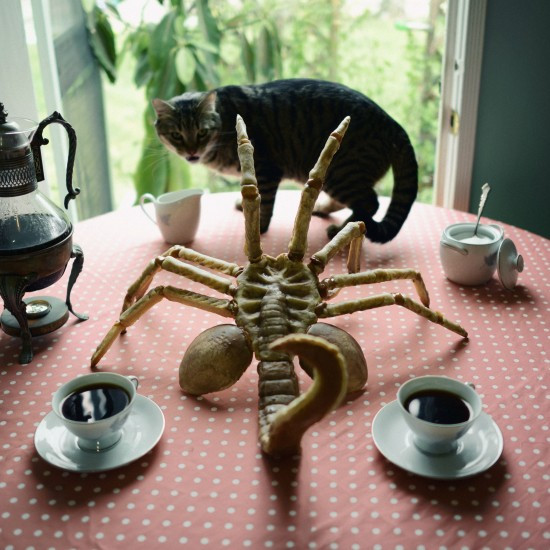 sugar cookie glued together with caramel and glazed with milk, sugar and nutmeg 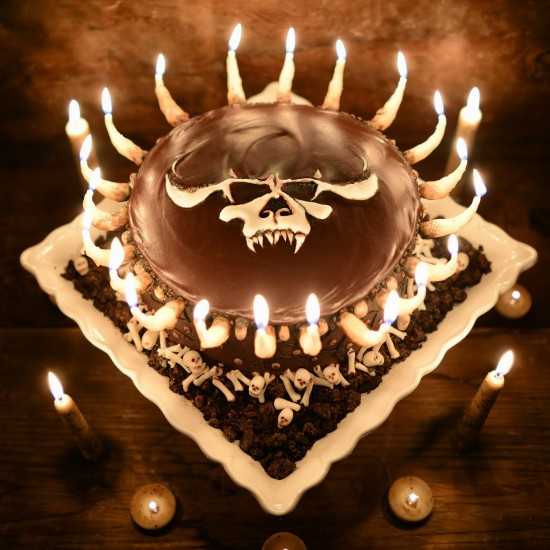 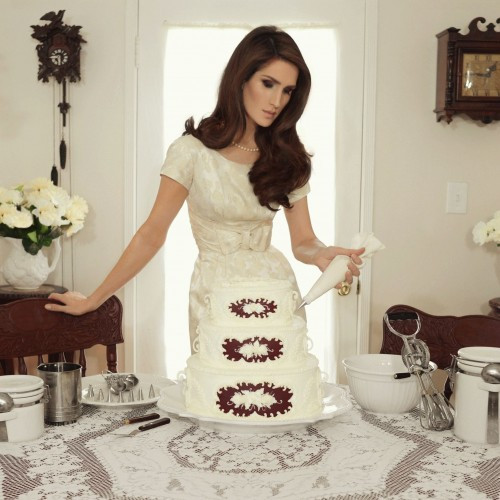 The glamorous Christine McConnell at work

Well shit, we’re this deep into tentacles, we might as well go one more.

“Mercury(II) thiocyanate (Hg(SCN)2) is an inorganic chemical compound, the coordination complex of Hg2+ and the thiocyanate anion. It is a white powder. It will produce a large, winding ‘snake’ when ignited, an effect known as the Pharaoh’s Serpent.

“When the compound is in the presence of a strong enough heat source, a rapid exothermic reaction is started which produces a large mass of coiling serpent-like solid. An inconspicuous flame which is often blue but can also occur in yellow/orange accompanies the combustion.”

You can’t fool me. That’s no chemical reaction. That white stuff just burned a hole in a dimensional membrane and allowed one of the Old Ones’ spawn to come through. They stopped the video right before it came out of that glass box and ate the face of the camera man. I have it on good authority.

(Thanks to Austin Weber for sharing this video with me.)

Okay, enough with the tentacles. Let’s turn now to something else disgusting from the natural world. Grant Skelton sent me this item, and I’ll just quote his introduction to it:

“Videographer Charlie Hamilton James and editor Shannon Sanders posted the following video to YouTube courtesy of National Geographic. James inserted a camera into the carcass of a wildebeest in the Serengeti. What follows is an intimate perspective of the carcass being consumed by vultures. Hope you’re not hungry…although given the appetites of metal fans, this video may actually make some of you hungry.” 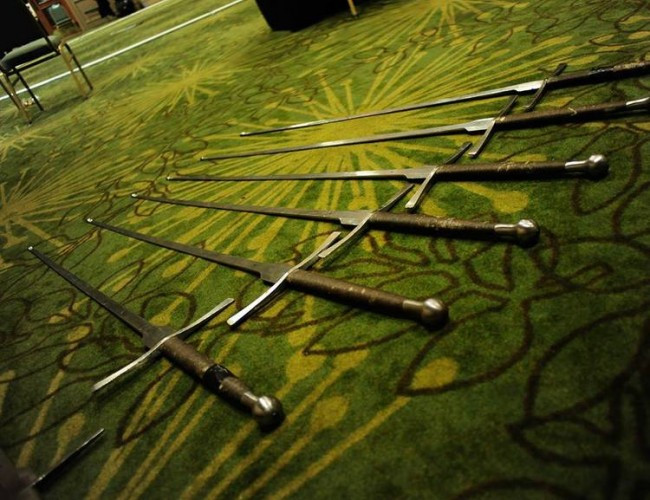 Well, that was refreshing, wasn’t it? Let’s try to cleanse our palettes now.

This next item involves a combination of characteristics that should be near and dear to the hearts of most metalheads:  It involves combat, cold steel, the resurrection of archaic traditions, and the camaraderie of like-minded geeks.

The subject of this next very entertaining video (courtesy of Mac William Bishop and The New York Times) is the budding sport of Longsword fighting, which in itself is but one of the sports generally classified as Historical European Martial Arts (HEMA). The largest of these competitive events in the U.S., and the one that’s the subject of the video, is organized by a Maryland-based group called Longpoint. In 2015 (its fifth year of existence), it hosted what turned out to be the largest Longsword tournament in the world, with representatives from a dozen countries participating.

A lot more information about Longsword fighting, Longpoint, and related HEMA sports can be found here:

(Utmu sent me a link to an io9 article about Longsword fighting months ago, and belatedly, I thank him for it.) 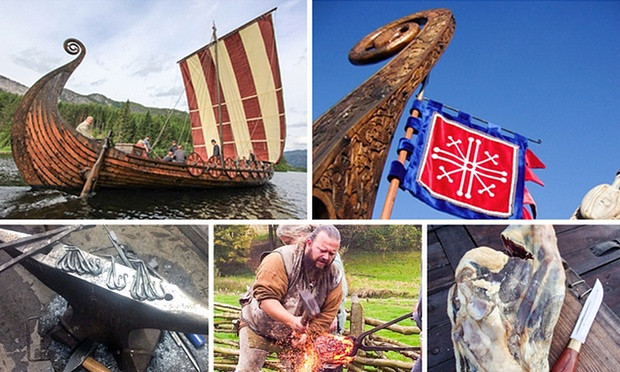 While we’re on the subject of reviving archaic traditions, here’s a story about a Viking school in Norway. To quote from an article at The Guardian published last month:

“Students at Seljord Folkehøgskule, a college 90 miles west of Oslo, are embarking on a new programme to learn traditional Viking skills such as sword forging, jewellery making and roof thatching, as well as the essential art of axe-throwing.”

Apart from the chance to learn such essential skills as axe-throwing, the students get to do that in a fitting setting. As explained in understated fashion by the headteacher, Arve Husby:

“[W]e’re in a proper Viking location, surrounded by what many people call ‘Norway’s most beautiful mountains’ – we call them ‘hills’ – and overlooking Lake Seljord, where the Seljord monster is supposed to reside, like Norway’s Loch Ness.”

Students of both sexes are learning “to carve wood, forge metal and bake bread, as well as honing their archery, shipbuilding and weaving.” Cool.

More info here (and thanks to Booker for the tip about this one). 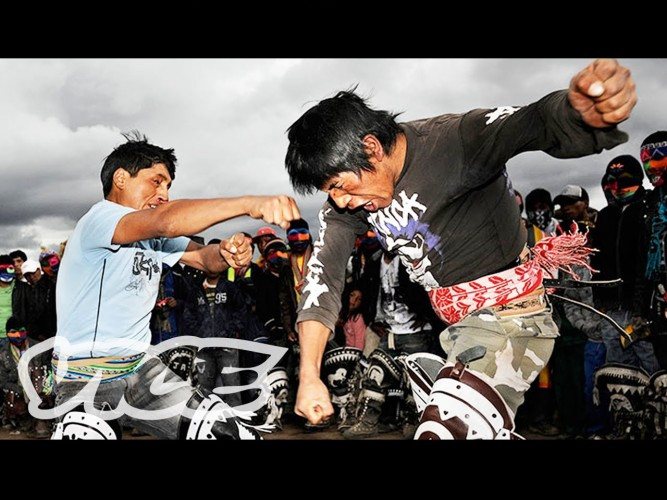 The next item will take more of your time than usual for these collections. It’s a 20-minute film produced by Vice about an annual Christmas festival called Takanakuy that takes place in the exceedingly remote province of Chumbivilcas in the Peruvian Andes. The film originally aired in 2011, but I only learned of it this week thanks to yet another recommendation from Phro.

Unlike the last couple of items in this post, the festival is not the revival of an ancient tradition, but a strange event that needs no revival because it has been going on for centuries and is connected to the resistance of the indigenous people in this part of Peru to Spanish invaders (and to the rule of Lima).

Yes, the video takes some time, but it’s time very well spent. Apart from the intrinsic interest of the subject matter, the video is also a hell of a lot of fun to watch because of the amusing narration by Thomas Morton, who was crazy enough to participate in the centerpiece of the festival — described as follows:

“In the Peruvian Andes, folks know how to celebrate the season right. What they do is, they put on a colorful ski-mask, dress up like Mad Max mountain bikers, tie a dead eagle to their heads, and get drunk and dance for about a week straight. Then, come Christmas morning, they all gather together in the middle of town and beat the baby bejesus out of each other. Now we’re talking, right?… Guys, girls, little kids, old drunk men in high-waisted pants; everybody in town fights at Takanakuy.” 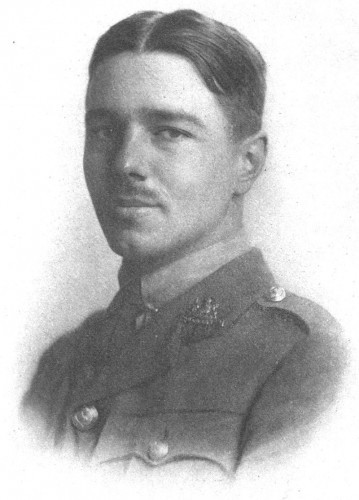 Well, lest we get too carried away with the fun of fighting, here’s another perspective, when fighting isn’t for fun.

I apologize in advance for attaching a downer to this generally light-hearted collection, but I’ve been an admirer of the poetry of Wilfred Owen for a long time — because it is so devastatingly honest and emotionally powerful. Owen was an English writer and soldier who fought on the front lines in France during World War I. He was killed in action on November 4, 1918, exactly one week before the signing of the Armistice that brought the war to an end.

His poems were unlike most of the flag-waving, patriotic drivel that spewed forth before and during the war. One of his somewhat lesser-known poems, “Disabled“, consists of vignettes of a young man’s life, as remembered by him from his wheelchair, now without arms or legs, his life and his body broken by the war. It doesn’t lose its impact despite the passage of so many years, because we never learn.

The following video was created by the proprietor of the Kuriositas blog, matching photographs from the war to Owens‘ words. 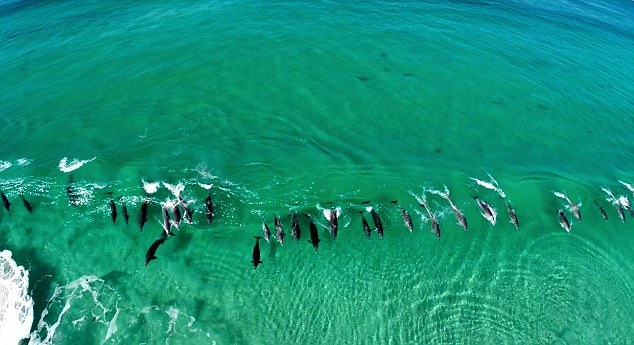 I guess this final item today isn’t really metal, but I didn’t feel quite right about ending today’s collection with that Wilfred Owen poem. So here’s a video by David Riggs of an enormous pod of dolphins surfing off the western coast of Australia, filmed from a quadcopter drone above Observatory beach near the town of Esperance.

(via Ark In Space)