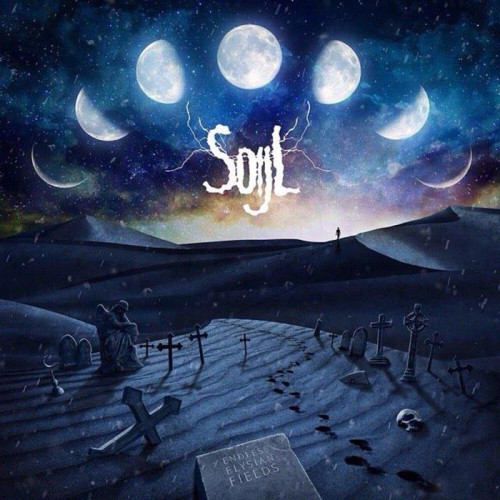 Soijl is the name of a project founded by Swedish multi-instrumentalist Mattias Svensson, whose past musical involvements have included the likes of Saturnus, Istapp, Vanmakt, and Nidrike. On Soijl’s debut album, Endless Elysian Fields, Svensson is joined by Henrik Kindvall of Skald (ex-Nidrike), who wrote the lyrics and provided the vocals. What the two of them have achieved is a powerful and moving work that’s enormously heavy, beautifully atmospheric, and emotionally devastating — and today we give you the chance to hear the entire album in advance of its September 21 release by Solitude Productions.

On the seven tracks included on the album, Svensson has crafted music that’s achingly anguished, each song built upon a bedrock of huge, moaning doom riffs from which tendrils of bereft guitar melody spiral upward like smoke from the dying embers of a funeral pyre. The songs are usually slow and majestic, spreading a heavy mantle of despair and heartache in their wake. Those calamitous bedrock riffs are dire enough to drag you bodily into a sinkhole of grief, but the lead guitar melodies are sublime, often ethereal, and even transcendent in their cold, alabaster purity.

The songs sometimes also include dissonant, disturbing interludes, as if to serve as a reminder of the seeds of pain that give birth to the flowering of heartaching beauty made manifest by Svensson’s high, soul-piercing guitar melodies. And Svensson also salts the music with big, burly, jabbing chugs that get your head moving, just as the mind inside it is being drowned in an ocean of tears.

Kindvall’s strikingly varied voice provides both a complement and a contrast to Svensson’s instrumental works. His enormously deep, gravelly growls, gritty snarls, and harrowing howls enhance the music’s aura of doom and pain. When he briefly breaks into clean vocals and theatrical spoken-word passages, their somber and distressing tones do nothing to lighten the atmosphere of desolation. Against the sound of his voice, coupled with the crushing bleakness of the main riffs in the music, those soaring, mystical guitar melodies and piercing solos become even more emotionally potent.

This is an album that will inspire comparisons to early Paradise Lost and the more deathly excursions of My Dying Bride, and it should have enormous appeal to fans of funeral doom as well.

As noted, Endless Elysian Fields will be released by Solitude Productions on September 21. The album can be ordered on CD here — it comes with a 20-page booklet designed by Roman Corvinus (Wine From Tears, Mare Infinitum, Aut Mori). The album is also available in digital form on Bandcamp at this location.