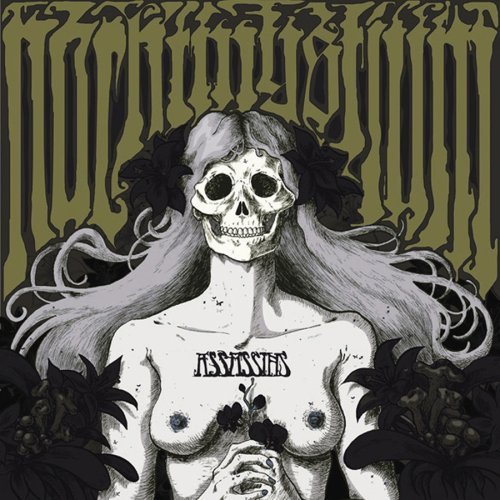 (Andy Synn returns to an irregular series in which he shares favorite things that come in fives.)

I’ve not done one of these in a while it seems, so while I’m tinkering away on a few other bits and pieces (I’ve got an EP review in the pipeline for this week, as well as another Synn Report in-progress… and maybe one day soon I’ll even complete that column about the importance of lyrics… though don’t hold your breath for that) I thought I might as well just throw something together for the sheer hell of it!

So, ignoring the well-documented douchebaggery of Blake Judd (he’s a toxic cunt by all accounts… but damn, he can write some mighty fine drug-induced Black Metal jams when he wants to), here’s five of my favourite Nachtmystium songs from the Black Meddle-era.

“Your True Enemy” (from Assassins)

I don’t know how much I’m putting myself out there if I say that Assassins is one of those rare, almost perfect albums that’s on-point from start to finish, but I know I wouldn’t be entirely alone in thinking that. As such it’s hard to pick a song from the album that’s been “overlooked”, but one I think definitely deserves more appreciation is “Your True Enemy”, which marries some torrential blackened spite to an array of insistent, brain-piercing hooks (“Not sorry! Not guilty!”), and a second-half which really hammers home the Pink Floyd influence in a fantastic way.

The thrashtastic “Hellish Overdose” channels a big chunk of Kill ‘Em All-era Metallica over the course of its 5-minute rampage, erring towards Aura Noir/Goatwhore territory in its sheer, cutthroat aggression (it shouldn’t be surprising that the frantic drum work is provided by Goatwhore’s very own Zack Simmons). It’s one of the band’s simplest, most direct songs, and makes me want to start a fight/fire/war every time I hear it.

In case you hadn’t guessed, I’m a BIG fan of the Doomsday Derelicts EP, and I’m particularly partial to its final track “Pitch Black Cadence”, which is just an absolute fucking masterpiece of pure, focussed malevolence. That initial predatory assault… that awful, menacing lead refrain… those ominous, rattling drums… it’s spine-chilling stuff, made even more effective by the sudden spasms of pure sonic chaos which punctuate the song, where the band seem intent on reducing their instruments to little more than shards and splinters. Easily one of their best tracks.

If there’s one thing that you can be sure of (apart from knowing that merch order you made is never going to arrive), it’s that Nachtmystium albums are always packed full of quality deep-cuts, some of which definitely go above and beyond the more well-known openers and their ilk. Case in point, the trippy co-morbid creep of “Blood Trance Fusion”. Not only does it have a killer title (I do love a bit of wordplay), but it’s also got some really nasty undertones, unsettling psychedelic keyboard parts, and a killer drum performance (courtesy of Wrest) that deserves your full attention.

“Give Me The Grave” (from Silencing Machine)

I originally had the title track in place here, but then I realised that everyone loves the title track. It’s one of the band’s strongest and most aggressive openers after all. So instead of that I’ve gone for another deeper cut, in the shape of the album’s ninth track, “Give Me The Grave”, which starts off with some hauntingly sombre melody-work, before dropping into a clanking, grumbling, bass-led groove, replete with killer, gang-shout chorus and some ultra-catchy riffery.

7 Responses to “FIVE OF MY FAVOURITE… NACHTMYSTIUM TRACKS”