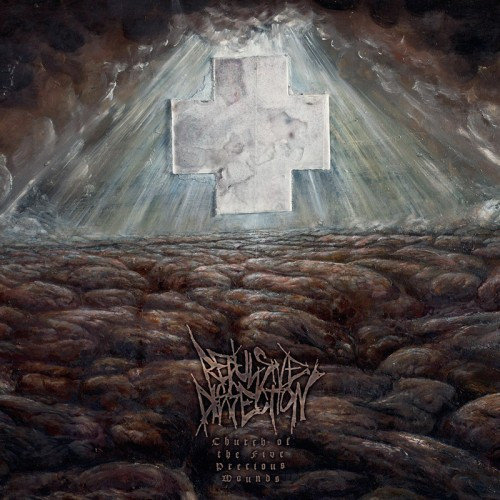 I’ll be honest, I’m not a fan of slam-oriented brutal death metal, at all. It’s usually about as cookie-cutter in execution as deathcore is. And the reason I say that is not to bash anyone who personally enjoys slam, but merely to point out that for me the new Repulsive Dissection record is the exception to the rule. Church of the Five Precious Wounds is bizarre unorthodox madness, sort of like a more chaotic take on the kinds of deranged and technical death metal that Malignancy and Origin play. It definitely helps that the slam breaks are sparse, and used to great effect as a force of tension between the relentlessly racing nature and blasting throttle of their music overall.

Church of the Five Precious Wounds really never relents from start to finish, and more importantly, never bores or dips in quality at any point in the record. The songwriting itself is a lot more dense and busier than that of most of their peers. It’s maddening to hear how many different parts each song is composed of. 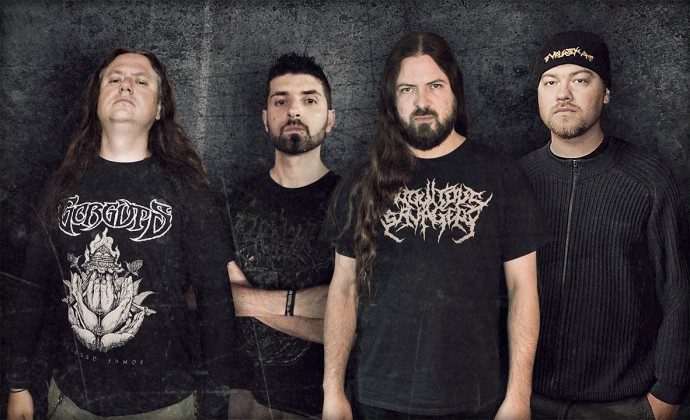 For those unaware of the band until now, they are an internationally based group with members from several different nations, all uniting for the common good of rising above mediocrity in a subgenre not exactly known for being innovative or memorable to begin with.

The album employs a brainwashing campaign as well, through various conceptually linked audio samples that add a bit more derangement to the fucked-up music they play. Just about the only thing that could be considered “standard” about Church of the Five Precious Wounds for a brutal death metal release is the toilet-bowl/swamp-monster gurgles of vocalist Tom Bradfield (UK). But at least he mixes it up with powerful hair-raising screams in every song.

Ultimately though, it’s the lacerating and frenetic guitar-work on this record that deserves the highest honor. Their sole guitarist, Yura Kowalchuk (Ukraine), is adept at both dazzling the mind and dissecting the flesh musically in equal measure. But having said that, bassist Victor Prokofjev (Japan) is obviously no slouch either. Just keeping up with the schizophrenic pacing and endless shifts in their music is impressive as hell in itself. He also gets some moments throughout where he is allowed to shine, and that helps make his presence more well known.

And finally, death metal drummer extraordinaire Davide Billia (Italy) (Septycal Gorge, Antropofagus, Hour Of Penance, etc.) lays down what I would argue is his finest drum performance to date.

It’s pretty simple to sum this one up: If you are a fan of brutal death metal, you need to order your copy right fucking now. And even if, like me, you typically aren’t a fan of brutal death metal, you should still probably go order a copy. Church of the Five Precious Wounds is an excellent record and a fine example of how to make this style of music sound fresh and forward-thinking.

*Church of the Five Precious Wounds is out now through Sevared Records.

3 Responses to “REPULSIVE DISSECTION: “CHURCH OF THE FIVE PRECIOUS WOUNDS””