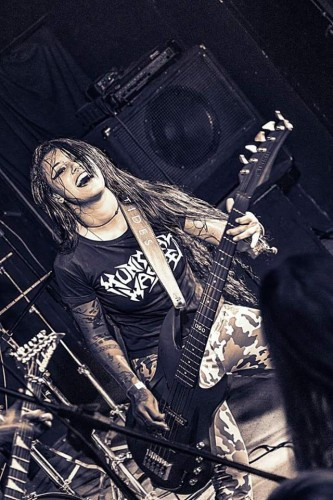 A short while ago I wrote a post in which I praised the Brazilian thrash/death trio, Nervosa. Fernanda Lira, Prika Amaral, and Pitchu Ferraz have been bringing their awesome brand of metal to the masses since 2010. Their first full length album, Victim of Yourself, was released in 2014 through Napalm Records, and the band has been on the road ever since.

I was hooked from the first moment I heard “Masked Betrayer” off of their debut EP, Time of Death. Simply put, Nervosa is a hundred different kinds of badass. So I was extremely excited when I was granted an interview with bassist/vocalist Fernanda. As you’ll soon see, she’s extremely cool, passionate, and a true metal warrior. A huge thank you to Mona Muliski for making this possible!

Derek: Hi Fernanda! Thank you for the opportunity to talk to you about Nervosa! Victim of Yourself has been out for over a year but I still listen to it all the time, it’s one of my favorite albums! Do you have a favorite song, or songs, from that album? Are there any specific tracks that are crowd favorites at your shows?

Fernanda: Thank you so much for still listening to it! Soon we will have new material to be headbanging at, hope you enjoy it! 🙂 So, it’s so hard to choose one from all the songs, ’cause they are all like sons to me! haha But if I had to, I would probably choose “Justice Be Done” or “Victim of Yourself”, because both of them have all the elements that are most characteristic in Nervosa, like catchy choruses and riffs, blast beats, etc, so I think they can summarize well what our sound is about. On the shows, people usually tend to go for the ‘hits’, the songs from the official videos like “Masked Betrayer”, “Death”, and “Into Moshpit”! 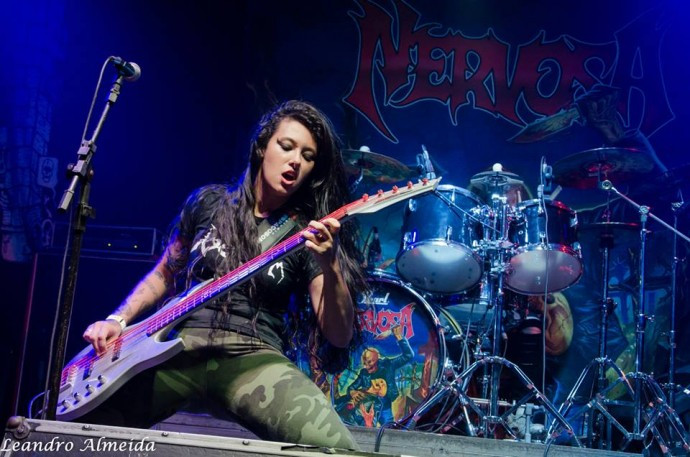 Derek: You just played your first European gig at Obscene Extreme. That had to be an amazing experience! What were some of your favorite moments from that show?

Fernanda: It was simply a KILLER experience. I have always watched those crazy videos of bands performing at OEF, and I always dreamed to be playing there one day, and when we got the news we would be there this year, it was a blast, I couldn’t believe it. My favorite thing about the fest is the crowd, such a crazy and amazing one! You have LOTS of fun when you are on stage with all those passionate people, those crazy and funny costumes and everything else. One of the best gigs we ever had, for sure!

Derek: You’re continuing your trek through Europe with Hirax. How has that been so far? Will Nervosa be doing any shows in USA in the near future?

Fernanda: The whole European tour was a blast and in addition to Hirax, we played with many other awesome bands with cool nice guys, like Crisix, Desolator, and Methedras!! We had a lot of fun with all those bands, it was a very good and enriching experience for everyone, I’m pretty sure of that. We definitely plan to be touring the US soon, we are working on many possibilities and I’m sure at least one of them will end up working out. It’s something we simply can’t wait to happen, it will be another dream come true, just like the European tour was! 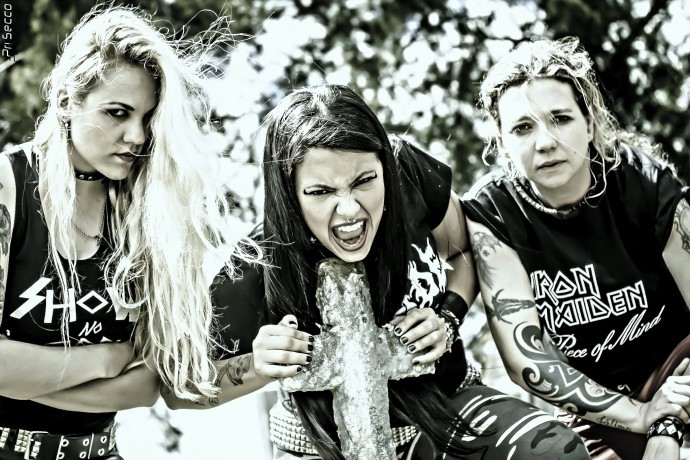 Derek: Nervosa has spent a lot time on the road since the release of Victim of Yourself. Are there any shows that stand out in your memory as being really special or exciting? Do you have any good on-the-road stories?

Fernanda: All the shows from the European tour were incredible, because each day it was a completely new experience, especially the huge summer fests we did. I mean like, we had never played in events that big and everyone watching seemed to be very supportive and having a lot of fun, so it was incredible! Apart from that, I think when we played in Bogotá, in Colombia, was a blast. There were thousands of people there, all of them very passionate and doing the biggest moshpits we have ever seen! Every time we play North and Northeast of Brazil we have a good time too, since the crowd can be very, very crazy and passionate!! I could spend a whole night telling you road stories, most of them are funnies, but I just can’t pick one!! Haha!

Derek: I’ve watched several concert videos of Nervosa shows on Youtube, you have a really energetic live show! I’ve pulled double-duty as a bassist and vocalist in the past, but I don’t think I did it nearly as well as you. When did you begin playing bass? Did you take lessons or are you self-taught?

Fernanda: First of all, thank you for such kind words; they are inspirational for us to keep on trying to do a good job 🙂 So, it’s been like 11 years since I started playing. I never had classes. My teachers were Steve Harris, Geezer Butler, Geddy Lee, because I learned pretty much everything I know nowadays from trying to play what they play. I think each person learns best in different ways, and this way was very healthy and enriching to me! As for singing and playing at the same time, it naturally happened in my life. The bands I was in needed me to do that, and I tried to develop it with time. It’s not easy, but to me it’s just a matter of getting used to it. 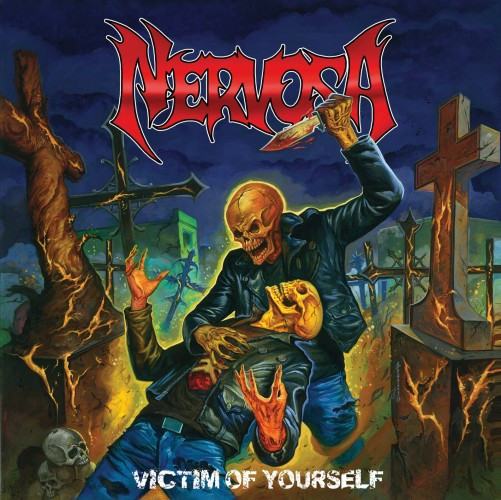 Derek: Can you tell me about the bass rig you’re using on this tour?

Fernanda: I use no pedals and most of the time I use Amped amps only. I play my one and only and beautiful Aristides Instruments Bass. I think it’s perfect for the kind of music I want, because I want my bass to be heavy but also clear at the same time, and this bass provides me exactly that, that’s why I’m so happy with it! I also use DR Strings that help me create this effect of heaviness and clearness simultaneously.

Derek: If I had to describe the Nervosa sound to someone I would say that it’s a thrash band with hints of death metal. What bands and/or albums have been influential to your songwriting?

Fernanda: You would say it right, I would agree with you, because me and the girls are very influenced by thrash and death metal, specially old school. I will say my influences for myself. To me Game Over/ The Plague by Nuclear Assault, Beneath the Remains by Sepultura, Leprosy by Death, and Revelations by Vader are some of the most influential to me, not only on songwriting but also playing- and singing-wise, they taught me a lot!!!! 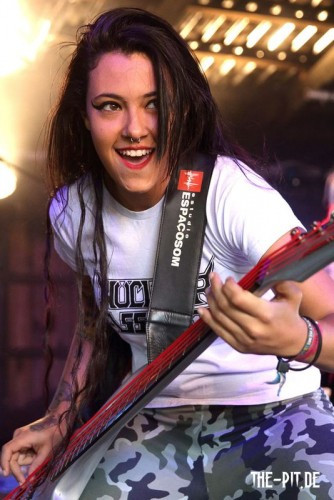 Derek: If you could choose any band, past or present, to tour with who would it be?

Fernanda: I dream of a ‘Brazilian Assault’ tour with us, Krisiun, and Sepultura playing all over together, can you imagine it? Also, maybe touring with Slayer, one of the most influential bands for the three of us in Nervosa.

Derek: The common view, in the USA, is that Sepultura opened the door for Brazilian metal bands to the rest of the world. Do you think that’s accurate? Is it easier these past few years for Brazilian bands to reach the global metal community?

Fernanda: I think Sepultura is the most important band in metal for us Brazilians because it gave us hope, it showed us that it’s possible to be Brazilian, to play thrash metal, to be known worldwide, and to play all over. They made a whole metal community trust their music, and that’s why I love them. But I am also glad to see the number of awesome Brazilian bands we see getting international deals and making tours all over. Brazilian metal is one of the most powerful there is out there, and the more it gets known, the happier I get, ’cause I am so proud of this solid rich scene we have down here. 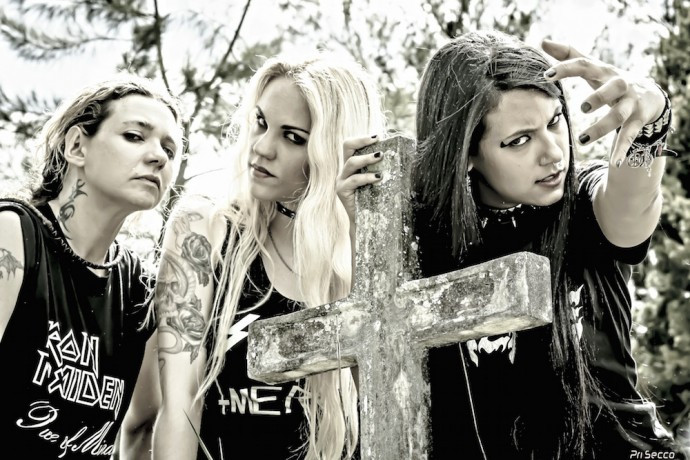 Derek: Is there a good thrash metal scene in São Paulo? What about other metal genres, like death and doom?

Fernanda: Metal in general is very solid here in Brazil, not only in São Paulo. Of course, as it is a huge metropolis, there are a lot of bands coming out of there, but the truth is, wherever you go in this continental country of ours, you will find a very solid and rich metal scene with passionate and supportive fans and AWESOME and great quality bands. My favorite ones, though, are in thrash and death metal, although we have good ones in all genres.

Derek: Do you have an idea when the next Nervosa album will be released? Have you started writing new songs?

Fernanda: We are already in the middle of writing the new album, and I have to admit it’s killer, haha! We can’t wait to record it and to be playing them live. We plan to be recording in January next year and releasing it around May, and then we can spend the rest of the year touring to promote it! We will soon have news to spread about it, stay tuned! 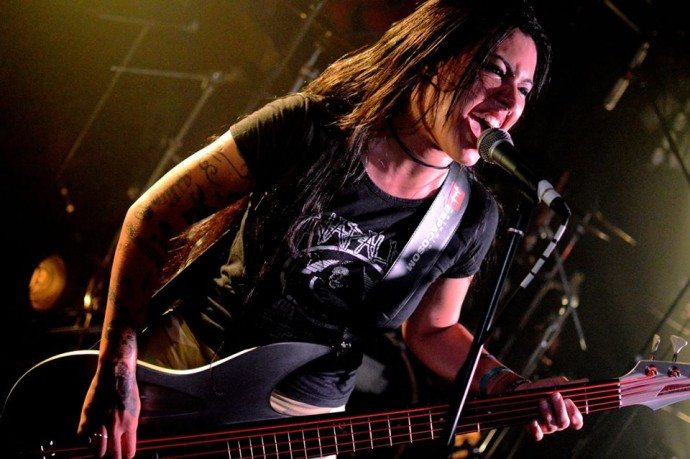 Fernanda: I know it’s not ‘metal’, but the first rock album I had, and it was the one responsible for making me be a part of this metal community, was Kiss – Love Gun! My uncle gave that to me when I was around 8, because I was totally crazy listening to Kiss Unplugged all the time and Iron Maiden. As Kiss is his favorite band, he gave that to me!!! The first metal concert I ever went to was to see Iron Maiden, my favorite band of all time. It was an incredible experience to me, because I was very young. It was an awesome concert, and I was with my mom and dad because they are also headbangers!!! Such a unique experience!

Derek: Thank you for taking the time to answer my questions! I hope to be able to see Nervosa in concert sometime soon!

Fernanda: Thank you for this great opportunity. I hope we can one day meet personally in one of our gigs!!! For everyone who’s reading, just keep supporting your local metal scene and respecting the bands, we have our sole responsibility to be keeping the metal legacy alive!

You can check out Nervosa’s Brutal Assault set here!

And listen to their most recent album, Victim of Yourself, here!

And show them some love by following Nervosa on: