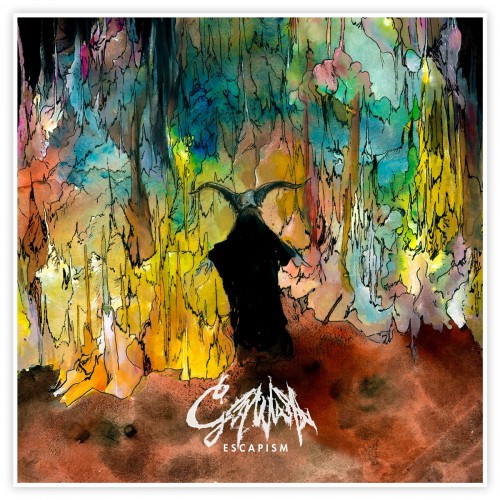 (Austin Weber introduces our premiere of the scathing new album by Maryland’s Genevieve.)

By definition, escapism denotes an activity or fantasy used to distract us from our daily pain and boredom. So when Maryland-based black/death act Genevieve decided to call their record Escapism, it seems to have been used here more like the opposite of what the word means — as if its use here instead actually represents an invitation of nightmares and horror into their world as opposed to hiding in positive forms of escapism. I get the sense that with music as pitch-black and haunting as Genevieve’s, this reversal of the term’s meaning was done purposefully.

For all the immense hatred and chaos on display in their music, Genevieve do take time to offer reprieves from the chaotic storm bearing down upon listeners, in the form of sparse instrumentals called “Paradise I” and “Paradise II”, which open and close the record. Both are built upon Middle Eastern-sounding melodies and played with a slow, restrained feel, although “Parasite II” reveals a more drone-influenced soundscape overall, one that that creates a sense of mystery as it closes the intense journey that Escapism has taken you on.

Typically I find the inclusion of both intro and outro tracks on an album to be boring or unnecessary. However, Genevieve have used them here in a way that adds intensity, employing them as an integral mood-building texture that greatly enhances what’s sandwiched between them. The record’s later tracks offer up some chill, bordering-on-ambient, sections within them that I was surprised to hear at first. Those moments lend a sense of balance to the music so that at least for those sections the listener doesn’t feel violated.

After “Parasite I” surreally eases you into the madness to follow, track two “Charnel Flow”, which we premiered here at NCS, immediately sets off into batshit-crazy and disorienting territory the likes of which require a strong stomach and a love for dissonance to fully appreciate. While Genevieve often split their compositions between grim black metal and dark death metal (think Portal) sections, some tracks do tilt more decidedly in one direction than the other, such as track three “Memory”. It may be the most solidly black metal track, albeit still highly unconventional in nature. The ending segment of “Memory” is the only point in the song where things slow down, and it captures how it would feel to fall off a cliff and witness your impending doom in slow motion.

After “Memory” ends, the title track “Escapism” offers another subdued instrumental that helps give you a break, and also makes the eventual lead back into madness on “Ego” that much more effective.

Of all the faster tracks, “Ego” gets a big boost from its smoldering beginning and stuttered, choppy feeling throughout, and like other tracks, it trails off into a light, ambient ending. Only this one is laced with paranoid spoken-word mumblings that sound quite creepy.

The tribal drumbeat and pulse that opens the following track, “Bizarre”, quickly descends into a sour and evil realm once the venomous and bleak riffing sets in and catches you off guard, with a back-and-forth shaking feel that makes enduring it somewhat nauseating.

Before that final instrumental and album closer, “Parasite II”, takes hold, the band have one more poisonous song to unfurl on “Fell”. It’s a track whose desolate and sparse beginning is allowed to build for some time before the viciousness the band do so well rises up and shatters any sense of calm that that had carefully been built up.

“Escapism” is truly an immersive record that takes you somewhere else, even though I’d hardly call it a diverting escape from reality. It’s more like a musical reinforcement of the horror and despair all around us that we can’t wish away. It’s not a record that is likely to appeal to fans of conventional black and death metal, but what it does offer, in spite of its sheer ugliness and noisiness, is quite striking and brilliant.

Escapism will be released by Grimoire Records on October 23, digitally and on CD and cassette. It features cover art by Brandon Geurts, and it can be pre-ordered on Bandcamp via the link below.

One Response to “AN NCS PREMIERE: GENEVIEVE — “ESCAPISM””