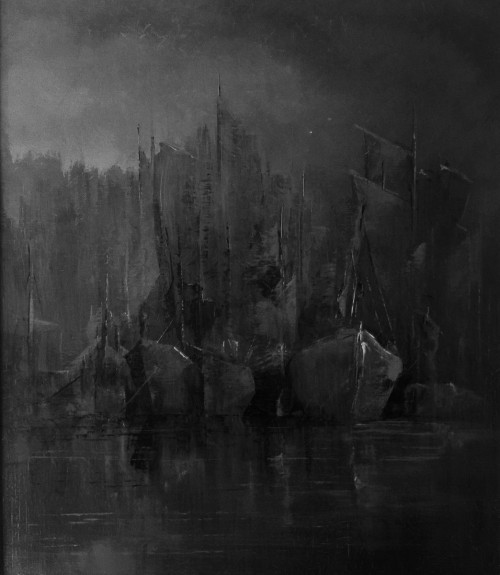 Lung Molde is an evocative name for a band. Knowing nothing about the music, it begins to shape your impressions of what you will hear. You begin to imagine your air supply choked off by a toxic growth of slime breeding in the hothouse of your own body, of a once pink vitality turned into a gasping black ruin, of your eyes clouded by the fog of your own impending asphyxiation. Or maybe that’s just me, contemplating the start of lung molde season here in the Pacific Northwest.

This Portland trio (which includes members of Triumvir Foul) chose their name well, because, as you’re about to learn through our premiere of their debut self-titled album, the music is indeed calamitous. Their brand of staggering sludge and doom generates an oppressive atmosphere, creating a soundscape that’s blighted, bulldozed, and burned. 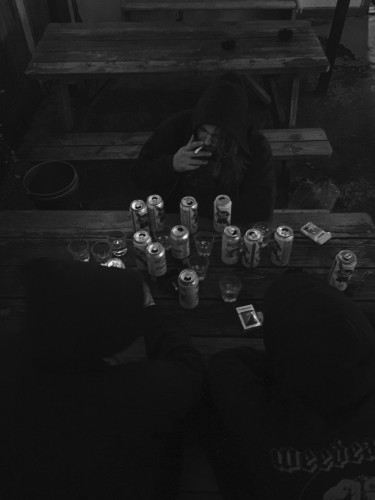 The lumbering, vibrating riffs that form the backbone of these songs are unstoppable steamrollers of sound, and the skull-clobbering percussion hits so hard that the drummer must have been doing his level best to reduce his kit to a pile of wreckage.

As if the catastrophic power and desolate atmosphere of those ingredients weren’t dispiriting enough, the lead guitar melodies ooze unhealthiness, and sometimes an overdose of hallucinogens. The dual-guitar solo in the album’s final track, “Skulls In the Acid Well”, may well be the album’s high point — something about it feels like it could take your mind apart if allowed to continue much longer.

And finally, the vocals could hardly be better for this kind of sour, crushing music. It’s the sound of a raw throat choked with blood and grit rising up in a dismal yowl. There’s so much red-eyed fervor in his incantations that you may get flashes of a backwoods ritual that’s going to end in a shallow grave for someone.

Lung Molde is a hard pull into a lightless pit, and while the band do a frighteningly effective job creating an atmosphere of hopeless collapse, the powerhouse riffs and jolting rhythms will keep you rooted in place, head moving, until they’ve finished the demolition job on your psyche. Prepare for a devastating experience, press play below, and inhale the lung molde.

The album is due for release on cassette tape on about October 30, 2015, by Caligari Records. It’s available digitally via the Bandcamp link below.