We might as well cut to the chase about this album, which is only fair, because it will chase you relentlessly from beginning to end: Kaeck’s Stormkult is one of the truly bright stars in the vast constellation of 2015 black metal. At least two qualities make it stand out in a crowded field.

First, in a genre known for its extreme intensity, Stormkult is extremely intense. For almost its entire duration, it’s a raging hurricane of sound — bombastic, terrorizing, and chillingly grim. If you want to be electrified by music, this will do it, and leave your head smoking. 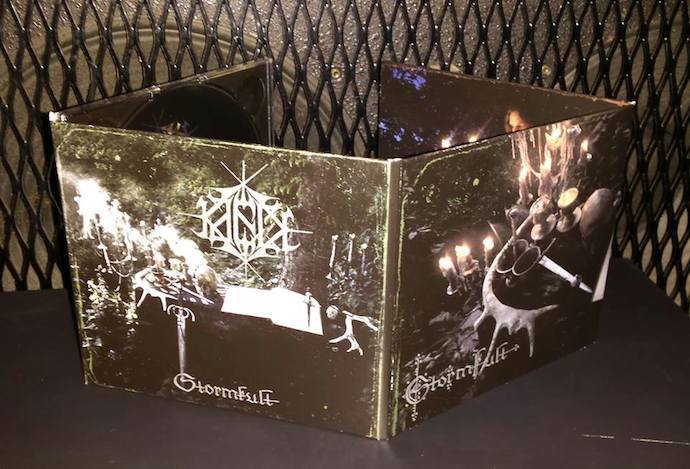 With few exceptions, Stormkult is a vibrating wall of raw, threshing riffs and bone-grinding bass, all launched at a rampaging pace. The blazing intensity of the music is harrowing in its potency, and as dramatic and serious as a grand mal seizure.

While you might expect this kind of storming, warlike black metal to be driven by relentless drum blasting, you would be wrong — and that turns out to be a nice surprise. Although you will encounter bursts of blast-beat aggression, the drummer relies more frequently on other varying rhythms (some of them unusual for this style of war metal), which makes for an interesting contrast. And although there aren’t acrobatic fills, the methodical rhythms are so compelling it’s as if they’ve reached out, seized your pulse, and pushed it into the red zone.

As electrifying as the instrumental music is, it may be topped by Oovenmeester’s vocals. Once again, although extremity in vocal expressions is the norm for this kind of ferocious black metal, Kaeck’s are virtually off the charts. The harsh vocals (mainly shrieking, but sometimes dropping into a low roar) are wild and savage to the point of derangement.

But if anything, the “clean” vocals that appear along with the harsh ones in most of the songs (by the same vocalist) are even more extreme. Those wails, yells, and wolfish yowls are so inflamed and agonized that they sound like red-throated expressions of delirium, so wrenching that they’re capable of putting the hair up on your arms.

There are exceptions to this Dutch band’s take-no-prisoners intensity. “Holenmuur”, for example, is a “builder” — it smolders at first, with an atmosphere that’s morbid and forlorn, and then it gradually grows to a bonfire.

The second quality of the album that makes it stand out is the songwriting. Not uncommonly, black metal bands who strive to create an atmosphere of lightning war in their music come across as just a torrent of abrasive noise, with not much to hold onto in the moment and not much to come back to either. Kaeck create atmosphere as well as bedlam. They write melodies that are hypnotic, menacing, and haunting, and those melodies seize attention even when everything else around them feels like a conflagration.

Many of the melodies tend to move in majestic sweeping waves through the surrounding firestorm. “De Heerser Wederkeet” is a fine example, with a low melody that sounds like the trumpet of doom and one in a higher range that is almost mournful. The high, arcing keyboard melodies in “Afgod” and “Wormvloed” can only be summed up with the word “epic”, as familiar as that word is. They elevate the songs onto a mythic plane.

Those are just examples. Every one of these songs includes penetrating melodies of torment, misery, and triumph that you can hold onto, some of them like fine traceries in a dense black cloth, some of them like regally infernal fanfares soaring over a massed crowd of demons — powerful, dramatic, and grim. Combined with Kaeck’s talent for electrifying ferocity, they make Stormkult an album to remember.

Although this is Kaeck’s first album, the band’s three-man line-up includes members of Sammath, Kjeld, and Noordelingen, and some of them have been active in the black metal underground for more than 20 years. The experience shows.

Stormkult is out now on the formidable Folter Records and can be ordered on CD here and via Bandcamp at the link below. Stream the album following the links.