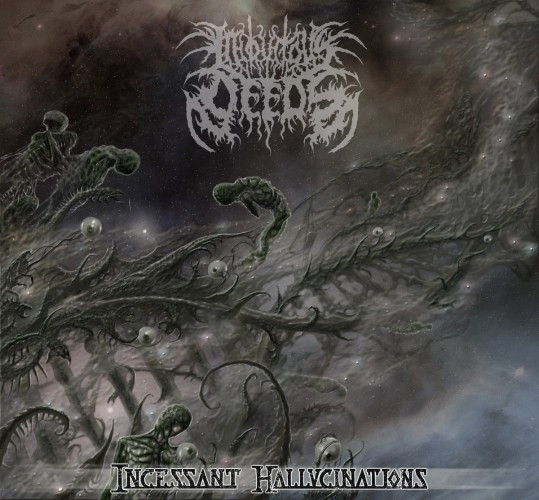 (Our friend Vonlughlio returns with his second review in as many days, this time singing the praises of the debut album by Iniquitous Deeds.)

Back in 2012 or 2013 when I discovered New Standard Elite, there was a band named on the label named Iniquitous Deeds, with a self-titled EP that displayed amazing musicianship and a killer production that fit well in the BDM genre. Now, flash-forward to 2015 and the release of their debut album Incessant Hallucinations, which saw the light a couple of months ago. With all the BDM releases I’ve been fortunate enough to hear, this album is one of my top choices in the genre.

The band are from California and the members are Matt Kilner (Drums), Niko Kalajakis (Guitars), Mike Simon (Vocals), and Chris Stratton (Bass). They are all top-notch musicians and have simply put out an album that has become one of my favorite debuts, along with Abhorrent Castigation’s from last year.

One aspect of this release I have to mention is the production; you can hear the vocals, guitars, and bass clearly, with none overshadowing the others. Plus, it enhances the structures of the songs, giving them a more brutal delivery (if that makes sense). The guitar and bass tone are fantastic, and the riffs are diverse within each song. The bass, as noted, is very listenable and not buried in the mix, plus it has moments when it creeps up when least expected.

The vocals — Hot Damn — are just inhuman and nasty. It feels like a monster got into the studio, or a really pissed-off alien, and I’ve really enjoyed them. Now for the drums, those fucking drums are insane. The level of speed, precision, and execution is just astonishing.

One more thing that’s also noteworthy about the this band are their lyrics — basically, very different from the usual straightforward guts, blood, shit, gashes, and gore we find in many BDM bands today (which, to be clear, I like). But for me, this tends more toward aspects of space, dark matter, nothingness. I could be wrong, but every time I listen to the album, it feels as if I have embarked on a journey though space, and each song is a chapter, with the last song “Infinitive Putrefaction” coming as the closing chapter. That ending riffs and the way in which the song changes, to then fade away, just gives me the chills.

Anyway, check out the album at the band’s Bandcamp page:

For physical copies of the album and merch, go to New Standard Elite’s Big Cartel Here: