For this Sunday’s look back at metal bands of yesteryear, we’re featuring Norway’s Zyklon.

In addition to the quality of their music, Zyklon are notable because the band’s line-up included guitarist Samoth and drummer Trym Torson from Emperor.

In a way, the band could also be thought of as a continuation of the project called Myrkskog, since Zyklon also included Myrkskog members Destructhor (guitar) and Sechthdamon (bass, vocals). (The discography of Myrkskog, by the way, was the subject of Andy Synn’s seventh SYNN REPORT back in May 2011 — here.) 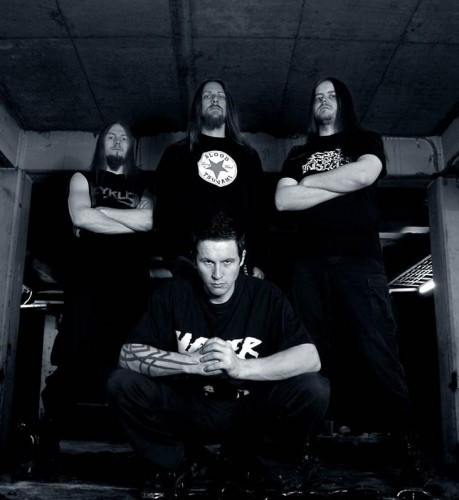 According to Metal Archives, “The name for this band came from, according to Samoth, a play on the word ‘cyclone’ (Zyklon is german for Cyclone). The band stated that there is nothing political about Zyklon or the name.” Zyklon should also not be confused with Zyklon-B, which was a past side project of Emperor that also included Samoth as well as Ihsahn.

Zyklon released three full-length albums between 2001 and 2006 and officially announced their split-up in early 2010. The music combines elements of industrial death and black metal. For the first album, World ov Worms, the vocals were provided by Daemon, the man behind Limbonic Art; for the next two albums, Aeon (2003) and Disintegrate (2006), Sechthdamon recorded the vocals.

Below I’ve picked four videos for your listening pleasure: “Hammer Revelation” from World ov Worms; an official video for “Psyklon Aeon” (the opening track from the second album); and then the band’s live performance at Party.San Open Air 2004 (divided into two parts), which was released on a CD/DVD in 2006 called Storm Detonation Live. Enjoy.

11 Responses to “THE REARVIEW MIRROR (ZYKLON)”