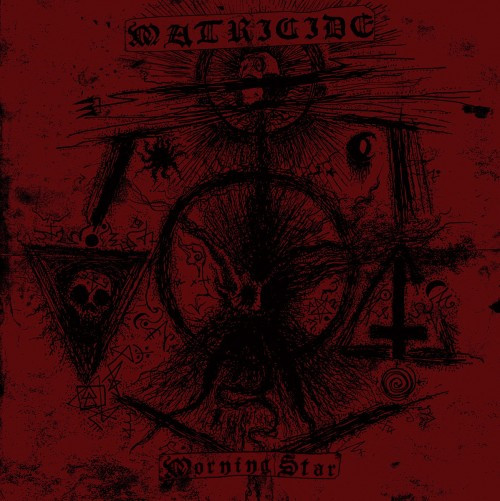 As I write this I’m still in Anchorage, Alaska, toiling away night and day for my fucking day job. Today I don’t have to start work hours before the sun comes up, as I have been doing since late last week, so I had a little time (not much) to explore new music. I’m already so far behind that I had no good idea where to start, so I made an impulsive choice — and it turned out to be a fantastic one.

What I picked was a new two-song release on Bandcamp from the Daemon Worship label, and I picked it mainly because that’s a label that has never let me down. The name of the release is Morning Star, and it comes from a now-disbanded Swedish group named Matricide.

Before splitting up, the band released one album in 2004 (Black Mass Gathering) and a small group of demos and EPs. Morning Star was the last of those short recordings. Apparently, it was intended to be released by the German label Sombre Records, but the death of the label’s owner prevented that from happening.

Daemon Worship will now be giving the EP a physical release on 7″ vinyl at the end of this year, but as mentioned, the two songs can be heard now and downloaded for a price you name at Bandcamp.

The EP is a big adrenaline-delivery mechanism — so full of explosive power and off-the-hook energy that it’s easy to be caught up in the band’s intensity while the bleak melodic undertow of the assault pulls your head into an atmospheric abyss. And speaking of the abyss, when the band slow down during the second of these tracks, it’s a stunning descent into a tar pit of doom and degradation.

In a nutshell, if you need something feral and ferocious that will wake you the fuck up, look no further.