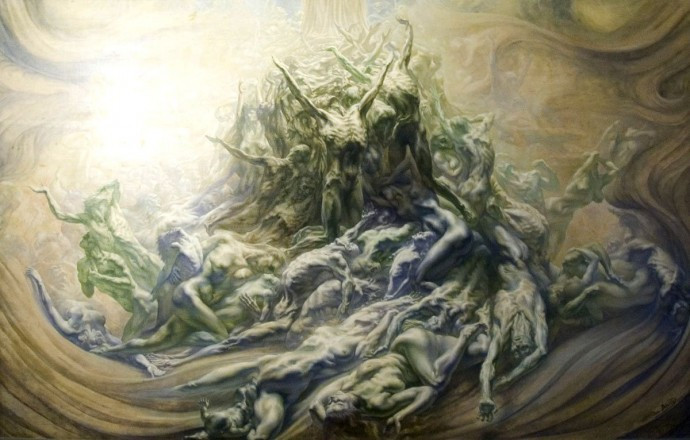 (Here are some musings written by Andy Synn.)

Despite what you might have seen and read elsewhere, I still think there’s a certain art to writing reviews. Not Picasso-level art, certainly, or Muhammed Ali-level art… but art all the same.

Of course this proposition isn’t helped by the umpteen badly written, badly researched, and grammatically suspect publications you can find out there in the wilds of the interweb, nor by the plethora of click-bait, troll-magnet reviews seemingly designed just to stoke controversy and discontent… sorry, I’ll get off my soap-box and get back to the point…

Anyway, I for one count myself very lucky to have a voice, however small, in the Metal community at large, that people actually listen to and respect. And it’s not something I take lightly. I don’t think of myself as particularly special or important as a result of it, but I do acknowledge that – as a wise, two-dimensional man once sort-of-said – “with a modicum of power comes a modicum of responsibility”.

Or something along those lines.

Now I know there are definitely those out there who think that reviews have largely been rendered obsolete by the advent of streaming services, the rise of YouTube as a music source, and the steady ascension of Bandcamp as many people’s “go-to” destination for their listening needs. And there’s definitely some valid points to be made along those lines. But, as with a lot of things in this world, this could simply serve as an opportunity to separate the wheat from the chaff.

After all, I know that my own reading habits have changed over the years as I’ve zeroed in more and more on what sites, and what writers, I trust (even if I don’t always agree with them).

What has surprised me recently though is the sheer amount of vitriol and resentment I’ve seen targeted at reviews and reviewers… and not necessarily for the reasons you might imagine.

Yes, we all know that the internet, for all its great gifts and almost unlimited utility, has its bad side. Mainly that it stimulates folks of a… certain disposition… to rant and rave and attack others with seemingly no fear of consequence or accountability. Heck, there’s been studies primarily focussing on the disinhibitive effect that the internet (and, particularly, comments sections and social media) can have on a certain type of person. We all know this (though I concede it’s nice to have the research to back it up).

But what’s really surprising is that a lot of the internet rage I’ve been witness to recently has less to do with whether a certain site or writer agrees (or disagrees) with the opinion of Mr. Angrypants McOutrage, and more about a general assertion that writers are getting special privileges which they don’t deserve!

Here’s an example which I’ve copied down word for word (though I’ll admit I cleaned up some of the punctuation because it bugged me so much):

“Why do “critics” get to listen to music first? Just because they label and critique shit means that they’re special and have these privileges in some way? If you’re a ‘professional critic’ than your existence is worthless. You have an inflated view of your opinions and just hear the one voice in your head all the time. You guys sicken me.”

Now, ignoring the obvious points of contention here (such as this person’s inability to grasp the very simple reason why writers/critics get early access to promos, or the weird implication that having only one voice in your head is somehow a bad thing), I think most people would agree that the level of victimhood and impotent fury on display here is quite frankly staggering.

We’ve all seen angry fanboys react badly when a writer (whether a good one or a bad one) criticises a band or album that they love, usually because they’re incapable of being objective about the band and/or have somehow become so invested in a band that they take any perceived criticism as a personal insult… although it’s also worth remembering that this can also be triggered by bad writing, or writing that appears to be pushing an agenda of some kind.

But this particular quote, featured above, was a comment left on an entirely positive review. So what this individual was complaining about actually had nothing to do with the content of the review itself, but more the fact that someone else had gotten to listen to it first!

You can definitely feel from reading the comment that this has been an issue worrying away at this person’s mind for a while now. The foot-stomping resentment and envy in this little tantrum is in fact actually almost palpable. The sheer scorn in the way he uses the words “critics” and “professional critic” would be cutting if it wasn’t quite so hilarious.

But, as easy as crazy rantings like this are to dismiss (and they are), there’s always an opportunity to learn something from any situation, even one as dumb as this.

So let me address my fellow reviewers first, and say this – please respect your audience. I know in this day and age it’s often tempting to address your readers with a mixture of snark and sarcasm and condescending internet memes, particularly if you feel like your audience contains more than its fair share of trolls and troglodytes (though that raises the question of exactly why this is your audience…). But, please, resist that urge. And don’t forget that the real reason you’re here is for the music.

Don’t get me wrong, being a music “journalist”, of any sort, requires a certain amount of ego. After all, you have to believe that your opinion is in some way worth listening to and will have some sort of value to other people. But this is something you actually have to prove as well. You don’t get respect in this way without actually earning it.

And, FYI, you’re probably never going to get it from some people. But that shouldn’t stop you trying.

If you really want to write, in service of exposing, critiquing, and promoting the music that you love… it’s important to keep a level-head. To try and maintain a sense of balance and, even if it’s impossible, to at least aim for a hint of objectivity.

If you do that, if we all do that, if we acknowledge that, yes, we are very lucky – privileged even – to be held up (by some people) as critics and tastemakers, mentors, and experts, as people worth listening to, then we’re less likely to take it for granted.

Remember that any authority you have, any perceived expertise or influence, is granted by your audience. And they can be a fickle bunch indeed. Fuck them over too many times, give them too many reasons to think that you’ve been bought out or that your integrity is for sale… and they’ll leave you like *that* [insert sassy snapping of the fingers]

And, to that audience, to our readers, to readers of other sites who might have (somehow) stumbled across this piece, I say this… cut us some slack, ok?

We’re all just people like you. We’re fans too. Some of us are even in bands ourselves, so we know what it’s like to have our music judged and criticised.

But, for whatever reason, we’re able to put our opinions out there for public consumption in a way that conveys some sort of authority on them. And that’s a privilege that we don’t (or, shouldn’t) take lightly.

Yes, there are definitely some writers out there who didn’t get hugged enough as a child, and are keen to use their position to get them the respect and attention they think that they deserve. But they’re easy to spot. You can see a writer with an agenda coming a mile off.

So please, don’t tar us all with the same brush. Just judge us on our own merit.

After all, as much as we’re critiquing the music, you’re critiquing us at the same time, by the very nature of your readership and patronage.

For what it’s worth I hope you enjoy and value what we publish here at NCS. Because I know that I damn well enjoy writing it, and I’m going to keep doing it for as long as you’re willing to keep reading it.